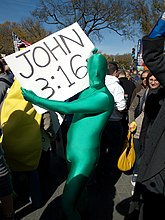 Things have gotten out of hand.

John 3:16 is a verse from the Gospel of John which reads:

At the point in the narrative where this verse occurs, Jesus is the one speaking it — so this verse is essentially Jesus telling everyone about his love and care for everyone, in the third person.

Since it has been translated into a huge array of languages, including ones which have incomplete or nonexistent Bible translations, it may be the single most translated piece of writing in human history.

This verse has sparked a fair bit of controversy between different sects of Christianity. Martin Luther based his interpretation of Christianity off of this verse, even going so far as to call it "the gospel in miniature".[1] This is because John 3:16 can be interpreted to mean that believing in good old Jeezy Creezy as your One True Savior is the only prerequisite for eternal life. One interesting side effect of this verse's importance to Protestants is that it is included in tons[2] of[3] Chick Tracts[4].

In the US, at least once per election, someone (usually the Democratic candidate) will have chain e-mails spread around accusing them of "faking" their Christianity: At a <insert party here> rally on <insert date here>, <insert candidate here> stated that their favorite verse is John 16:3 rather than John 3:16. This is a particularly ironic mistake to make, because the text of John 16:3 is:

The verse in popular culture[edit]

Because the verse is so central to the meaning of Christianity, it is often used as a means by which to raise awareness of the religion.