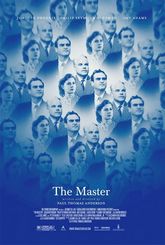 The Master is a 2012 film written and directed Paul Thomas Anderson (who also brought us films like Boogie Nights, Magnolia and There Will Be Blood.) It stars Philip Seymour Hoffman (Oscar winner for Capote), Joaquin Phoenix (Walk the Line and vagrancy) and Amy Adams (Enchanted, yeah the Disney film, you got a problem with that?). The plot of the film involves a former WWII soldier-turned-drifter who becomes a major player in a cult started by a charismatic, short and slightly chubby author in 1950 on a boat. Hmmmm... does this remind you of anyone? Unsurprisingly, it has been reported that some enemies of Xenu are a tad upset about the film.[1][note 1]

The film opens with an introduction to Phoenix's character, Freddie Quell, the only major character who doesn't seem to be based on any real-life person. He lives on animal instinct, drinking and sleeping around, and providing an opportunity for the Machiavellian Hubbard figure, Lancaster Dodd (Hoffman), to test his theories about human nature. Dodd and his wife Peggy (Adams) invite Quell into their religious movement, the Cause, and attempt to mold Quell in their image. But it doesn't take, and when he resumes his self-destructive tendencies, Dodd, realizing he has lost, banishes Quell from the movement.

Yes and no. The facts behind the movement depicted in the film are undoubtedly drawn straight from actual Scientology history, from the belief in recovering lost human potential right down to the year of formation (1950 in both cases). Hoffman even looks like Hubbard! The belief in all human memories being recorded and recallable, along with the infamous auditing sessions, are displayed as well. Hoffman also reacts poorly to very reasonable criticisms by doubters.

However, the film seems less like an attack on Scientology than a deep character study of a man struggling to come to terms with the limitations of human nature. As the film progresses, there is less emphasis on the other members of the Cause, and more on Dodd and Quell, with Dodd trying endlessly to "break" Quell out of his self-destructive behavior. There is even a moment when Dodd's son admits he suspects his father of having made everything up, but the moment is portrayed as a lament for two men whose minds cannot seem to find peace, rather than as an attack on a movement.

Writer/director Paul Thomas Anderson has publicly stated that Scientology was merely a spring-board for the idea rather than its focus, though of course he kind of had to say that to avoid a lawsuit.

The critics loved it, of course.[2] It didn't exactly turn a profit though.[3] All three major actors received Oscar nominations, but none won, and the film received no non-acting nominations, not even for Best Original Screenplay.[note 2]