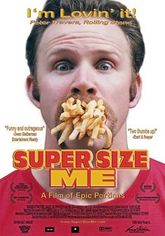 Super Size Me is a 2004 documentary describing how a sudden change from a healthy, vegetable-based diet to a diet of unadulterated fast food will destroy your health. Its conclusions are about as reliable as that description might make them sound. Or, to put it another way, No Shit Spurlock.

For thirty days, director and star Morgan Spurlock ate nothing but Mickey Dee's scrumptious offerings. His basic rules required that he try as many menu items as possible and that he always accept an offer to "Supersize it", but never supersize unless asked. In a short time, Spurlock gained a great deal of weight and became so unhealthy that his doctors advised him that he had to stop, or risk permanent damage. It took Spurlock fourteen months to lose the weight he gained during the one-month experiment.

The film relied on some aggressive showmanship to make its point. On the second day of the diet, Spurlock orders a super-sized double-quarter pounder with cheese meal. Within a few minutes of his meal, he vomits: the sheer amount of rich, fatty food is far too much for him to stomach as he tries to consume the huge burger, enormous fries, and cavernous soda. At a later point in the film, the filmmaker's girlfriend (a vegan chef, who interestingly left the vegan lifestyle in 2013[1] and caused quite an uproar), sadly reports that their sex life had suffered badly.

He also went to three different schools to harass the lunch ladies criticize the food being served in the cafeteria.

The film also deals with the subversive advertising campaigns of fast-food companies and how it encourages unhealthy eating for its own profit. It was nominated for an Academy Award.

Despite the rather commonsense approach that Spurlock took to make his point, his methodology was far from flawless. Critics of the film, including McDonald's, argue that the author intentionally consumed an average of 5,000 calories per day and did not exercise, and that the results would have been the same regardless of the source of overeating.[2]

Any scientist or rational person can explain that one experience doesn't provide sufficient evidence to make a point. Other individuals have made their own films to contradict Super Size Me; Soso Whaley ate at McDonald's for a month, but chose less unhealthy options and practiced portion control, losing eighteen pounds.[3] Chazz Weaver, on the other hand, ate at McDonald's for a month but simultaneously engaged in an exercise program to avoid fat gains.[4]

In a more clinical experiment, the University of Linköping gave their students an offer - consume 6000 calories a day, primarily from fast food paid for by the university (although fry up breakfasts and saturated fat-heavy food was also allowed), and try to curtail exercise at the same time. The test group consisted of 12 men and 6 women, mostly medical students, who were given the promise of being pulled out if their body weight increased by 15% or more. By the end of the experiment, the students reported feeling tired and bloated, particularly in the first week, but improving after that with no pronounced depression or mood swings as was reported in the documentary. Physically, they reported body weight gains of 5-15%, but cholesterol was virtually unaffected and while liver readings did initially deteriorate (as measured via ALT levels), some actually improved during the course of the study - the liver, apparently, is adaptable. Those that didn't had returned to normal within six months. This seems to cast some doubt on how good Spurlock's results are.[5] [6]

Unfortunately, though, many criticisms of the film generally miss the point. Certainly it was a dramatized and exaggerated approach to fast-food, because Spurlock wanted to make a documentary that was not just informative, but also entertaining and marketable. It's easily possible to eat a moderate diet of fast food and stay in some semblance of health, and even possible to indulge extravagantly if you mitigate the damage with portion control and some exercise. But Super Size Me was a criticism of the seductive addiction that can develop to these large amounts of fat and sugar - by the end of the film, Spurlock craves his daily dose - and an illustration of how damaging the diets of many Americans are. Taking things only a bit further than a surprisingly large number of people, a relatively healthy man risked permanent liver damage within only a month.

In 2018, Spurlock went public with a decades-long history of chronic alcoholism, stating "I haven’t been sober for more than a week in 30 years."[7] This contradicts the central premise of the film, which ostensibly required him to eat and drink nothing but what was available at McDonald's, and in the film there is a scene where he tells his doctor that he doesn't use alcohol. It is also a more likely explanation for the severe liver damaged observed at the experiment's conclusion.

The response of Penn & Teller on their show, Bullshit!, was marginally better. It essentially ceded much of the film's point, acknowledging that fast food is disastrously bad for consumers, but argued that for many families it remains the most easily-accessible and lowest-cost source of food.

Comedian Tom Naughton did an entire feature-length attack on Super Size Me with his film Fat Head, an embittered and painfully unfunny refutation of numerous imaginary claims. Naughton argues that no one is forced to eat at McDonald's, and that too many people are labeled as "obese". In one memorable moment, Naughton discovers he has 31% body fat and that though he is 5'11" and only 206 lbs, he is nonetheless medically "obese", a fact he repeats with an air of disbelief, as though through sheer incredulity he can make it seem silly. Naughton "suggests that Spurlock's calorie and fat counts don't add up" and criticizes Spurlock's refusal to publish the Super Size Me food log; The Houston Chronicle reports: "Unlike Spurlock, Naughton has a page on his Web site that lists every item (including nutritional information) he ate during his fast-food month."[8]

While McDonald's denied and downplayed much of the impact of the film and Spurlock's assertions, changes occurred at the restaurant level that appeared to be a response. Within several months of this film's release, the "supersize" option was removed from the menu. Within several years, McDonald's began to regularly offer and advertise more healthy options, such as apple dippers, 2% milk, salads, and snack wraps (a lower-calorie alternative to a full-fledged sandwich).