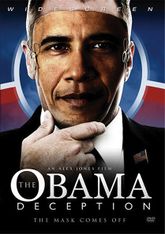 Alex Jones never was known for his Photoshopping skills.

The Obama Deception: The Mask Comes Off, usually just referred to as The Obama Deception, yet oddly referred to by Jones' voice over on the title screen as The Obama Deception: The Truth Strikes Back, is a schlockumentary film created by Alex Jones about American President Barack Obama.[1] It argues that "the Obama phenomenon is a hoax carefully crafted by the captains of the New World Order. He is being pushed as savior in an attempt to con the American people into accepting global slavery."[2] It is the worst kind of conspiracy theory, as it takes out-of-context sound bites and some elements of real concern and then suggests a wholly fictional and malignant plan. This makes The Obama Deception particularly difficult to refute among conspiracy theories, especially when combined with the esoteric financial theories and elaborate Illuminati mythology.

The movie is composed of a series of speeches by various individuals — a rapper, a Republican strategist, "trend forecaster" Gerald Celente — interspersed with a voiceover by Alex Jones providing an overall speculative narrative about the emerging New World Order. The evidence for his claims seems to be:

Obama is continuing the process of transforming America into something that resembles Nazi Germany, with forced National Service, domestic civilian spies, warrantless wiretaps, the destruction of the Second Amendment, FEMA camps and Martial Law.[2]

Much of these claims rely on frenzied exaggerations about Obama's planned youth service programs to encourage volunteerism; some commentators have alleged that this is an attempt by Obama to create some manner of personal army.[3] There is nothing but hysteria to justify such a view, but that's never stopped Alex Jones before.

Other elements of these claims stem from justifiable concerns about the Obama administration's failure to oppose some expanded elements of executive power in the United States, such as powers granted by the USAPATRIOT Act. However, these reasonable points are blown into an outlandish assumption that this failure is leading to a bloody and permanent seizure of power.

Comparisons to Nazi Germany are leaned upon heavily by the movie, which repeatedly seizes on superficial similarities.

The perfect way to refute all these claims is to say, "Hey, Obama is out of office, and, well, none of this actually happened."

Obama’s handlers are openly announcing the creation of a new Bank of the World that will dominate every nation on earth through carbon taxes and military force.[2]

This theme of an oppressive group of international bankers, malicious and controlling, that have been trying to take over the world for years, is a common one for Infowars. There are probably several reasons for this.

One of the reasons for this theme is the dense and opaque nature of high finance, which doesn't lend itself well to dilettantism or soundbites. For the uninitiated, it can be alarming to hear on the news that the World Bank

are extending relief loans to the Republic of the Congo and will monitor its development; [4]out of context, it sounds as though international banking conglomerates will control a sovereign country. Sometimes the IMF and other international lenders impose conditions in exchange for loans; these are intended to ensure the loan can be repaid but nonetheless can be politically controversial. An example is the austerity package Greece agreed to in return for a joint European Union-IMF bailout in 2010.[5] These complex economic issues lend themselves well to fearmongering by The Obama Deception. It is also false to link this specifically to Obama: the World Bank and IMF were founded in 1944, and the IMF has imposed conditions in exchange for loans for decades.[6]

Further, the historical story given as background - the long conflicts in early American history over a national bank, the establishment of the Federal Reserve, and so on - can be strung together to sound as though it's always been "bankers" versus "the people." But this is of course a false perception in many ways. For one, the "bankers" have varied tremendously over the years, and it's a stretch to try to identify modern-day executives at Citicorp with Alexander Hamilton. Additionally, the fact that "bankers" have been in conflict with government or populists is mostly a reflection of the long existence of banks. It would be just as valid to read history as "farmers" vs "the people," and just as absurd.

The notion of "carbon taxes" as the tool of a malevolent Bank of the World is simply an update to the previous theory which had tariffs on goods as a tool. There is still no more evidence that either is being used that way by such a group. Interviews with speculating pundits do not count as evidence - far too often, the movie makes the mistake of thinking that "someone said this" is proof.

International bankers purposefully engineered the worldwide financial meltdown to bankrupt the nations of the planet and bring in World Government.[2]

Considering how much the world recession hurt international bankers, they must be some very altruistic people. Of course, there's no way to prove that a shadowy cabal didn't engineer the repeal of the Glass–Steagall Act

(which allowed the mass accumulation of so-called "toxic loans" and "too big to fail" conglomerates), the massive banking debt of Iceland (80% of their huge debt was with international banks, who were crushed when Iceland essentially defaulted), and the other exceedingly complex factors involved. But given that all the players appear to have acted in their (short-sighted) best interest, and there is no evidence to indicate that they were being manipulated, Occam's Razor suggests that the best explanation is probably not that the Illuminati were at work.

Obama plans to loot the middle class, destroy pensions and federalize the states so that the population is completely dependent on the Central Government.[2]

Wait, isn't that the Republican agenda?

The Elite are using Obama to pacify the public so they can usher in the North American Union by stealth, launch a new Cold War and continue the occupation of Iraq and Afghanistan.[2]

The analysis about how Obama is "clearly being controlled" is given by Webster Tarpley, whose long association with Lyndon LaRouche, 9/11 truthers, birthers, and virtually every other sort of conspiracy theorist suggests that he can't walk to the corner store without spotting more machinations by the global elite that haunt his steps.[7]