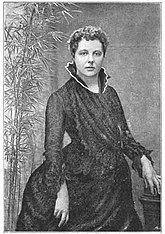 Annie Besant (1847–1933) was a well-known British atheist, freethinker, socialist, feminist, political activist[1] and, ultimately, a latter-day woo-peddler. She was raised a Christian and, at the age of 20, married Frank Besant, an Anglican minister. However, she was a formidable woman, and split from her husband over religious differences to become an active member of both the secular movement and the Fabians. Later, she met Helena Blavatsky and became involved in the Theosophical movement and Freemasonry.

Born Annie Wood into a middle-class family of Irish extraction living in London, Annie lost her father, who died when she was just five years old. Her mother ran a boarding-house for boys at Harrow School, but struggled financially - young Annie was cared for by her mother's friend Ellen Marryat, who ensured that she had a good home-schooled education and imbued her with a sense of duty and with feminist ideals. At the age of 19, while on a walking holiday, she was reintroduced to Frank Besant, a young, high-church,[2] evangelical vicar who proposed to her after only a week.[3] Frank took Annie's reluctant silence as a tacit acceptance, and she drifted into an engagement under the pretence that as a vicar's wife she would be able to satisfy her desire for a noble and useful life by working with, and helping, the poor.

In the three years following her wedding Annie conceived two children, a boy in January 1869 and a girl (born August 1870). A near-fatal bout of whooping cough and bronchitis suffered by her daughter caused Annie to start questioning her religious beliefs, and over the following three years she endured self-torment, and even contemplated suicide with chloroform, as she turned from Christianity to atheism.[3] However, Annie's political views hardened, and she became convinced that deeper social changes were needed beyond immediate service in order to alleviate poverty and suffering, advocating birth control. She converted to Theosophy in the 1880s, and continued to follow this cause for the rest of her life, eventually rising to become the leader of one branch after it split into factions. Among secular causes, she advocated Indian independence, women's suffrage, and vegetarianism.[4]