Swastikas on a Native American bowl

The swastika (Sanskrit), also known as the Hakenkreuz (German) or fylfot (Old English), is a cross-like emblem with angled arms, found in most cultures throughout the world. Nobody flipped their shit about it for over 10,000 years until a certain psychopath got a hold of it. 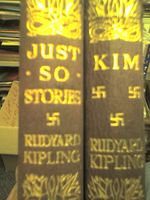 Before the Nazis, the swastika was used as a decorative motif to represent India, as on these Kipling

Swastika-like images have been found throughout ancient cultures. Most notably, it was a fertility symbol in India and other countries, and has positive connotations in Hinduism, Buddhism, Jainism, and some other faiths. The Hindu swastika was and is an emblem of a faith-based set of constructs, but apart from that, it is fairly harmless. 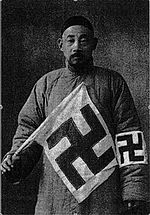 was dressed to help out in a soup kitchen.

The most common Buddhist swastika has anticlockwise arms and can be seen at numerous temples in the far east; Hinduism and Jainism, however, nearly always use a swastika with clockwise arms. A comfortable myth abounds that Hitler's swastika was "backwards," but even in Buddhist iconography, the right-facing swastika was far more common a hundred years ago than it is today. Because the left-facing swastika is rare in Hinduism (keep in mind what Hitler was trying to convey) and absent from Jainism, this myth has the potential to be very dangerous.

In North America petroglyphs have been found with the swastika symbol. There is not yet consensus regarding the meaning of the symbol. The state of Arizona paid homage to this heritage on its state highway markers of the 1920s and 30s.[1] During World War II, the Arizona Department of Transportation began installing state highway markers sans swastika.[2]

See the main article on this topic: Raëlism‎

The swastika, in conjunction with the Star of David, is used in the Raëlian movement. They believe that the whole symbol represents the infinitude of space and time. However, the Raelians eventually changed their symbol when the Israeli government prohibited them from building an embassy for their alien gods in Jerusalem.Who knows why?

See the main article on this topic: Asatru

A banner used on Asatru websites

The swastika is also used as a symbol in Germanic neopaganism, and there is a movement among Germanic neopagans to "rehabilitate" the swastika as a religious symbol rather than a racist one.[3][4] Many Asatru websites display a banner containing the swastika along with the tagline, "Heritage Not Hate," apparently unaware that this makes an association that really doesn't help their case. 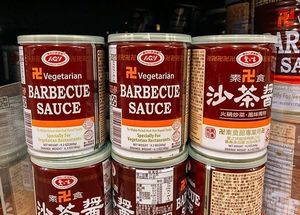 Don't be shocked at the sight of this product, which you can find in Asian specialty grocery stores; this is just the Chinese Buddhist use of the symbol.

While the swastika was originally a relatively harmless symbol, the far-right Thule Society appropriated it. Many of the original Nazis were involved in this group, and as a result turned it into an emblem of racism. Thus, it is one of the most recognized symbols in the world. Such is the power of the emblem to provoke, any shape vaguely resembling it is often deemed to be one, and its owner or designer accused of being a Nazi. Most of the time, this is actually no different to the face of Jesus appearing on a cheese sandwich.

If you ever see this happening, don't be a dick. Inform people, but be aware not to help nazis in defending their use of it. Also, be mindful and informed yourself about the cultural context. Swastikas on Asian products and structures or buildings that predate World War II are most likely innocent. People from Asia, for instance, already have to deal with shocked ignorant people, unaware of the swastika's worldwide ubiquity, calling for their symbol to be removed.

There have been attempts to reclaim the swastika back to its original, more positive roots. They usually receive backlash or unwittingly receive the support of Neo-Nazis, but most attempts at reclaiming the swastika strongly reject Nazism and even present it as an argument to combat Nazism.

Post-Nazi Germany has banned use of the swastika in a Nazi context, to the point where even anti-fascist use of it spawned a debate (in the end it was allowed if the anti-intent was undoubtedly clear). In 2007, Germany attempted to get the European Union to pass new laws instituting a similar ban across the EU, but failed in this due to the objection of Hindus. Hindu communities are exempted from the ban in Germany as well.

Another exception is if the swastika is displayed for the purpose of teaching, research or other pursuits aimed at staatsbürgerliche Aufklärung (civic education). However, material that is not considered educational, such as WWII-themed computer games and plastic model kits, have to be sold in special, swastika-free versions. In some cases, companies not wishing to make two versions of their software/model may wind up distributing a swastika-free version in all markets, not just in Germany and other markets banning the swastika.

As of March 2020, the video game Through the Darkest of Times is the first and only game in Germany to legally contain Swastikas as well as the Nazi salute. This is due to the nature of the game in which the player takes lead of a cell of resistance in pre-war Nazi Germany. Since the game's purpose is also to educate young players about the progression of Gleichschaltung, its symbols bear meaning that are important for understanding the historical context. However, some have also criticized the decision, namely the Ambassador of Israel Jeremy Issacharoff.[5]

Note: The Nazis never referred to the swastika as a "swastika," but as a hakenkreuz (hook-cross). 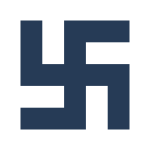 The swastika has always been popular in Finland. It has been the symbol of the Finnish Air Force since 1918 and is a state symbol as well. After WWII, Air Force planes and symbols don't show it anymore, as requested by the Allied coalition. It survives though in badges, awards, symbols; even the Presidential Order of the Cross of Liberty showcases a swastika. Many paintings by the national painter Gallen-Kallela include the symbol, which means that prior notifications and arrangements must be made when they are loaned to exhibitions abroad.

It doesn't help that Finland allied with Nazi Germany to fight the Soviet Union. 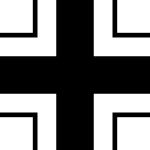 Most groups that reenact WWII-era military events are understandably hesitant to use the swastika in public when playing the role of the Germans. In its stead, the Balkenkreuz[6] ("beam cross" or "bar cross") is frequently used.[7] Some, however, are perfectly happy with flying the swastika and the SS runes.

See the main article on this topic: Pseudohistory

Some claim that their country is home to the world's oldest swastika(s), and that therefore it is the cradle of civilization, and their ethnic group is the Aryan (or whatever) master race. Of course, given that such arguments are made by nationalists in several different countries, such claims regarding which swastikas are "the oldest" are almost always false.