Weimar's Courtyard of the Muses.

The Enlightenment or The Age of Enlightenment (an approximation of the German Aufklärung) was an era in the 17th to 18th century that occurred following the Renaissance, and describes the period when Western philosophy switched to advocating reason as a primary source of authority. Its impact on Western thought, and indeed Western civilization in the long term, can hardly be overstated, although some people sort of missed out on this period. It marks a time when philosophers across Europe as well as in the North American colonies presented a fundamental challenge to many long-held beliefs and traditional dogmas, resulting in significant societal upheaval, most notably the American and French Revolutions.

Enlightenment philosophy is an umbrella term for many divergent schools of thought, and being philosophers, those who adhered to it loved nothing better than to quibble with each other. It is nevertheless possible to make out some general features of this broader trend: at the center of Enlightenment thought is the human capacity for critical reasoning, an ability which philosophers of the time considered to have so far been underutilized and rendered impotent by unquestioning adherence to tradition and superstition, as well as deliberate suppression at the hands of traditional elites.[note 2] This leads directly to the fundamental importance of freethought as well as the ability to voice one's opinions freely in the public square, without having to fear repercussions from those in power. An important goal of the Enlightenment was to offer opportunities for education to the broader populace, so they might be empowered to engage in free and public debates as well.

Enlightenment philosophers, most notably John Locke, developed the modern form of the notion that all human beings possess certain universal and unalienable rights that are independent of the society in which they live. Drawing on the work of Thomas Hobbes and his concept of the social contract, Locke argued that humans have a natural right to life, liberty, and the ownership of property.[2] Spinoza identified the concept of right with power or capability to do something, and saw this as a fundamental aspect of citizenship and believed that outcomes were better when reason played a larger role in political decision-making.

While the establishment of a sovereign government is in the rational interest of the would-be subjects, it can only be legitimate if it serves to uphold and defend these rights, and is therefore constrained by them. In the USA, this sentiment was echoed in the Declaration of Independence and codified in the subsequent constitutional Bill of Rights, as far as US citizens are concerned. The French Declaration of the Rights of Man and of the Citizen of 1789 takes a more explicitly universalist approach.[3]

The aforementioned notion of natural human rights, most importantly liberty, that exists independently from the state has sweeping implications for the legitimacy of any government. Both Locke and Thomas Paine argued that revolution is permissible if a government does not respect the fundamental rights of its citizens.[4] This served to justify both the American and French revolutions and subsequent successful (at least in the US) attempts to establish orders based on the explicit consent and participation of the governed, an important precedent in the development of modern democracy. Enlightenment thinkers were not unanimously in favour of this development; notably, Immanuel Kant rejected any right to a revolt against even a dictatorial government and praised the "enlightened absolutism" of his native Prussia. Other influential philosophers of the time supplied additional underpinnings of modern liberal democracy: Jean-Jacques Rousseau put forward the notion of popular sovereignty and reaffirmed a republican model of the state,[5] while Montesquieu

developed the doctrine of the separation of powers as a safeguard against tyranny.[6] Montesquieu's analysis was that each of the differing types of governments – democracy, monarchy, and despotism – had strengths but were subject to specific weaknesses, and that the best way to remedy the weaknesses with each type was to combine elements of each into a republican form of government, with checks and balances among the different branches.

While the scientific revolution predates the Age of Enlightenment, this period saw significant advances in the circulation and availability of scientific knowledge, mostly due to the rapid proliferation of books and newspapers among an increasingly literate populace.[8] Debate societies, book clubs and coffeehouses sprang up in the cities, exposing broader social strata to the newest ideas and bringing the academic ideals of open debate into the public sphere. In their role as salonnières, women began to participate and play an important part in these debates, although only a small number of them had this opportunity. The first edition of the Encyclopædia Britannica was published in 1768 and became an instant hit despite its severely constrained editability. First attempts were made to apply the scientific method to the study of patterns in human behaviour, most notably by Adam Smith, generally considered to be the father of economics. 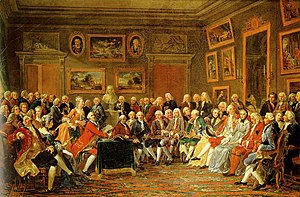 A French intellectual society—a salon—discusses the works of Voltaire.

Although the Enlightenment is often associated with the rigorous application of logic and scientific principles to all areas of human life (this is the premise of critiques such as Horkheimer and Adorno's Dialectic of Enlightenment, as well as many contemporary defenders of Enlightenment principles), most enlightenment thinkers were concerned with identifying the limits of rationality, establishing where reason could and could not be applied, and what other methods were available to understand the world and make judgments about science, morality, and art. While early proto-Enlightenment thinkers like Spinoza and Descartes typically applied rationality and mathematical models to all areas of thought, from the mid 18th century this was critiqued by figures such as David Hume and Immanuel Kant.

Kant's Critique of Pure Reason claimed that human reason is based on sensory data but constrained by innate mental structures. He deduced that reason could not be usefully applied to areas not directly accessible to perception, such as the human mind or soul; cosmological questions and metaphysics; or God.[9]

Particularly in Britain and Ireland, many philosophers such as Adam Smith, the Earl of Shaftesbury, Francis Hutcheson, and somewhat Hume, believed human beings have an innate moral sense which allows us to tell what is right or wrong without the application of reason.[10] Many philosophers applied similar ideas about the existence of an aesthetic sense to the appreciation of beauty, although few people even today would claim the assessment of art is based purely on reason.

Much of David Hume's work was focused on setting out what we could not know. His skepticism extended to denying we could have knowledge of cause and effect or certainty about any thought process involving induction. Hume concluded that we must rely in our everyday lives on beliefs that we cannot prove, including the connections of cause and effect and the supposition that the future will resemble the past.[11]

Hence, the Enlightenment model of the human mind is far from naive scientism or positivism.