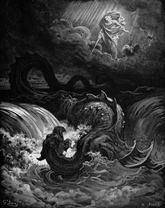 The imaginary beast as imagined by the imaginative Gustave Doré.

[1] a giant relative of crocodiles that did in fact exist, but died out 112 million years ago. Some creationists believe Leviathan could have been a dinosaur, such as a Parasaurolophus or Corythosaurus, or a pliosaur such as Kronosaurus.[2]

One main trait of the supposed Leviathan was that it could breathe out fire (Job 41:1-34). Amazingly, creationists have started to suggest that Sarcosuchus and even the hadrosaur Parasaurolophus could breathe fire![3]

Thomas Hobbes used the term to refer to a strong, absolute sovereign in his writings on social contract theory.

It might be argued that Leviathan could conceivably have been an extinct aquatic reptile such as a Liopleurodon — except for a single issue: pliosaurs such as Liopleurodon became extinct some 150 million years ago.

As for the fire-breathing argument presented by creationists, if dinosaurs could breathe fire, they would have had adaptations around their mouths to protect themselves from radiant heat. Nothing resembling such an adaptation has ever been seen. Furthermore, in order to fuel its fire breath, the animal would need to have an impossibly high caloric intake, since in order to expel energy in the form of flames it would first have to go into the animal in the form of food. Another question is what use an aquatic Sarcosuchus would have for breathing fire; it would have to be concluded that God gave them this purpose in anticipation that millennia later, a few cranks would use it as proof that the Bible is true in all particulars.

The Leviathan is equated with the Sin of Envy; however, it is also described as being king over all the sons of Pride. As such, some Biblical scholars argue that the Leviathan is a metaphor for Satan. That, at least, is plausible.

In the Book of Job, God is described as having "crushed the heads of the Leviathan" and in Jewish tradition, it is believed that the Leviathan will be served alongside Behemoth as the main course at a banquet for the righteous at the end of the world. Let's just hope "the righteous" like seafood, or not.

The Fertile Crescent mythologies that ultimately lead into the Bible frequently involve a primordial chaos (the "waters" that God moved over and parted into Earth and sky), which in turn may be represented by a water-dwelling serpentine beast. In a motif termed Chaoskampf

by folklorists, the serpent is destroyed by a deity who represents order, thus allowing the world to be created (sometimes from the remains of this beast). The Bible's offhand reference to God crushing Leviathan's head is one artifact of this trope; another, much more recent Chaoskampf is the story of St. George and the Dragon.