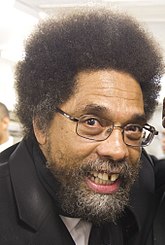 Cornel Ronald West (1953–), an African-American philosopher, author, and civil-rights activist, has arguably become best known for his 1994 book Race Matters, in which he analyzes the relationship between race and social/economic matters.[1] He also appeared in both The Matrix Reloaded and The Matrix Revolutions, and provided philosophical commentary on The Matrix Trilogy, injecting the philosophy of William James, Schopenhauer, and others.[2] As of 2018 he is an emeritus Professor of African-American Studies at Princeton University;[3] he is also professor emeritus in Philosophy and Christian Practice at the Union Theological Seminary in New York.[4]

In the 2008 U.S. presidential election, West supported Barack Obama as the Democratic Presidential candidate, speaking to over 1,000 of his supporters in 2007 at the Apollo Theater, Harlem.[5]

However, as a socialist, West soon turned sour on Obama's policies: he criticised when Obama won the Nobel Peace Prize as he deemed his drone bombing of civilians to be a little bit too hawkish and militarist. In his latter years, West became notorious for his criticisms of Obama. He criticizes him so much that he has been compared to a "jilted lover" by Chris Hedges from Truthdig.[6]

West retracted his support for Obama as early as 2009, saying that Obama had become "a black mascot of Wall Street oligarchs and a black puppet of corporate plutocrats. And now he has become head of the American killing machine and is proud of it."[7][8][9] In November 2012, West said in an interview that he considered Obama a "Rockefeller Republican in blackface."[10][11] Despite this criticism, he chose to vote for Obama in 2012.[12] In 2014, West gave an interview slamming Obama, calling him a "counterfeit" who posed as a progressive. West defined Obama's presidency as "a Wall Street presidency, a drone presidency, a national security presidency."[13]

See the main article on this topic: 2016 U.S. presidential election

In 2015, West expressed his support for the "democratic socialist" Democratic contender Bernie Sanders during an interview on CNN Tonight. West argued that Sanders' plans to divert wealth from Wall Street elites to the poorest members of society would be beneficial for the African-American community.[15] On August 24, 2015, West tweeted, "I endorse Brother @BernieSanders because he is a long-distance runner with integrity in the struggle for justice for over 50 years."[16][17] In July 2016, after Sanders exited the presidential race, West endorsed Green Party nominee Jill Stein.[18]