The Greenback Party was a 19th century left-wing and populist American political party, also known as the Independent Party, the National Independent Party, and the Greenback Labor Party (not to be confused with George Wallace's American Independent Party, or the villain from Danger Mouse[1]). Founded around 1875, it comprised a mix of farmers and trade unionists who found common cause in opposition to a Republican Party which favored big business particularly in its monetary policy. This made them one of the few political parties to be actually in favour of inflation.

In mirror image to Goldbuggery, the worship of gold and the gold standard practiced as a second religion by many American fruitcakes, the Greenbacks put their faith in fiat paper money: the greenbacks which had been printed by the North during the American Civil War to finance its costs.[2] The Greenback Party liked the way that paper money could become less and less valuable, which is crap if you hold lots of it, but it's significantly better if you owe lots to the bank. (Whether this would work in practice is not guaranteed, since banks may have the option to raise interest rates or otherwise change terms of lending.)

As well as calling for greenbacks to remain in circulation with an increased supply to drive down the price of money, the party pursued a generally leftist, pro-worker agenda. They filled the space temporarily vacated by the Democratic Party, which had been discredited in the North by its unfortunate support for the losing side in the American Civil War. The Greenback Party was also a precursor to the Populist Party of the 1890s.

Before the Civil War, American money was convertible to gold: you could swap a banknote for a fixed weight of metal. When he went to war, Abraham Lincoln found that he needed a lot more money than he could borrow at reasonable interest rates from banks. Faced with interest rates of up to 36%, the solution was for Congress to use its powers to print money that the government would agree was legitimate and full legal tender but which couldn't be converted to gold. This may seem counter-intuitive but is how paper money works today; however Lincoln's banknotes, nicknamed greenbacks, were novel in an era of gold-backed currency. Humorously, Lincoln rejected the notion of printing "In God We Trust" on the new money, suggesting a better motto would be: "Silver and gold I have none, but such as I have I give to thee."[3]

The value of greenbacks fluctuated against conventional gold-backed dollars during the war, depending on the fortunes of the Union armies: from parity it fell to as low as 2.58 greenbacks per gold dollar at one point in 1864. After the Civil War, the government let some of the greenbacks remain in circulation while they argued what to do. Conspiracy theories hold that Abraham Lincoln was assassinated for issuing the greenbacks or refusing to withdraw them, because they threatened the banks' powers and profitability.[4][5]

The Civil War ended and Lincoln assassinated, for whatever reason, and America tried to get back on its feet despite considerable debt and destruction. As often happens, after the war a recession followed. The US government sought to stimulate the economy by encouraging lots of railroad companies, giving them land to build railroads on. The railroad companies (who needed money to buy trains and track) sold much of the land to farmers. This fueled a property bubble, which burst in the Panic of 1873, creating a deeper depression and leaving large numbers of indebted farmers. 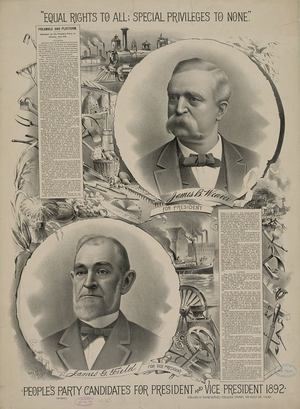 The economic theories of the founders of the Greenback Party weren't as strange as those of the Lincoln conspiracy theorists, but they reflect a similar belief in the disruptive power of Lincoln's greenbacks. Devaluing the currency would reduce the value of debts, helping indebted farmers, the overstretched railroad companies, and the steel companies who were the railroads' main suppliers. For the same reason, banks were strongly opposed to any devaluation, because it would mean they got less money back. In 1874, President Ulysses Grant vetoed a devaluation bill. In 1875, a new Congress moved to further tighten the money supply by accumulating gold so they could eventually redeem the remaining greenbacks left over from the Civil War. The result was further deflation, a threat to the greenback's existence, and no end in sight for the indebted.

The Republican Party was strongly pro-bank; the Democratic party was hated in the North for its part in the Civil War. So what America needed was another party. The Greenback Party took shape from an initial meeting of farmers and reformers in Indiana in 1874, being constituted at a national convention in Indianapolis in May 1876. Initially, it was a farmers' party, but 1877 saw a series of strikes being brutally repressed, leading to a politically committed wave of workers in the US's industrial heartlands who joined the new party.[6][7]

Their initial motivation was currency reform, but they moved to a wider progressive platform supporting an eight-hour day, income tax, and female suffrage. This led to particularly strong results in the 1878 midterm elections to the House of Representatives, winning 13 seats.[8] The same year they became the second-biggest party in the Texas state legislature.[9] Prominent figures included their 1880 presidential candidate James B. Weaver, and Thomas Ewing, Jr, a Civil War general. Marcus M. Pomeroy, a newspaperman and anti-Civil War Democrat from Wisconsin, led a faction which briefly split into the Union Greenback Labor Party, before rejoining.

In the mid 1880s the Greenbacks rapidly faded away, under the presidencies of Republican Chester Arthur and pro-business Democrat Grover Cleveland; the economy was improving, trade unions were becoming more organized, and the Democrats were more electable. And perhaps they were unable to escape the taint of the single-issue party whose issue has become a bit less relevant. Some members went on to join the Populist Party (or People's Party), a largely agrarian movement. The Greenback Party fell to 2 members of Congress in the 48th session (from 1883), 1 in the 49th Congress, and 0 in 1889. It took nearly 100 years and the toil of Richard Nixon but in 1971 the US dollar ceased being convertible into gold.

The party stood presidential candidates in 1876, 1880, and 1884, never gaining any electoral college votes but managing a reasonable showing by third-party standards.

In 1876, when Rutherford B. Hayes won by a whisker, Peter Cooper polled 83,726 votes (0.99%). He was an industrialist and inventor, who started with a glue factory in Manhattan's slaughterhouse district at Kips Bay, pioneering industrial chemistry and polluting the city's water. He built the US's first steam locomotive, Tom Thumb, and founded the Cooper Union for the Advancement of Science and Art in New York. But by 1876 he was 85 years old, the oldest ever presidential candidate, and nobody expected him to win.[10]

1880 was their high point, with James B. Weaver attracting 305,997 votes (3.32%); he polled 11% in Texas, 10% in Iowa, and 9.9% in Michigan.[11] Weaver was originally a Republican, and strong supporter of Prohibition. But in 1878 he was elected to Congress on the Greenback ticket, with Democrat support, as a Representative for Iowa's 6th District. After his failed presidential bid, he stood unsuccessfully as Greenback candidate for Governor of Iowa. He then became active in the Populist Party, standing for President in 1892, winning 5 states and receiving 8.5% of the vote; he then joined the Democratic Party.[12]

In 1884, Benjamin Franklin Butler stood on a joint Greenback Party/Anti-Monopoly Party ticket and came fourth with 134,294 votes (1.33%), just behind the Prohibition Party candidate John St John. Butler, a Massachusetts-resident soldier and lawyer, was a divisive figure and a strange choice for nationwide office. Before the Civil War he had been a pro-slavery Democrat, supporting Jefferson Davis's 1860 leadership bid. As a major general in the Union Army, he had been instrumental in emancipating the South's slaves (as a form of economic warfare rather than out of humanitarian concern), was a controversial military governor of occupied New Orleans (whose Jewish population he called "Jews who betrayed their Savior, & also have betrayed us"), and embarrassingly failed to capture Fort Fisher in December 1863. Renowned for his legal mind, he later co-authored civil rights legislation including an unsuccessful 1871 ban on the Ku Klux Klan and the 1875 Civil Rights Act (parts of which were struck down by the Supreme Court in 1883). He served as a representative for Massachusetts 3 times and briefly as Governor just before his presidential run.

By 1888 the party was effectively dead.

Using inflation to combat debt is still advanced as a strategy by some people, including in recent debt crises. Most relevantly to the concerns of the Greenbacks, lenders will typically respond by raising interest rates, which means any advantage gained will be short-lived, and would depend on the terms of lending (fixed or variable interest rates, necessity of refinancing debt with revised terms).[13]