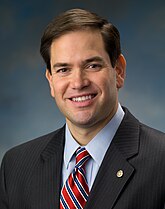 Starting in 2000, Rubio served in the Florida House of Representatives, eventually becoming Speaker of the House.[1]

Elected to the United States Senate in 2010,[3] he is (as of 2021) is one of six Latino Americans serving in the Senate, alongside fellow conservative Cuban-American Ted Cruz, as well as Bob Menendez, Catherine Cortez Masto, Ben Ray Luján, and Alex Padilla.[6]

In April 2015, Rubio announced that he would run for President of the United States,[3] though he ended up suspending his campaign after Donald Trump won Rubio's home state of Florida in the primaries.[3] During the 2016 campaign, Trump had a particularly fun time bashing Rubio, calling him "little Marco" (in apparent reference to Rubio's relatively small stature of 5'9") and "a little frightened puppy".[7][8] Perhaps Trump's "best" internet flame at Rubio was Trump's tweet that "Lightweight choker Marco Rubio looks like a little boy on stage."[9]

After dropping out of the 2016 Presidential campaign and initially stating that he would not seek reelection in the Senate, Rubio changed his mind and was reelected in the 2016 general election.

Rubio seemingly changes religious stances with the wind. He's transferred from Catholicism to Mormonism, back to Catholicism, then to a Southern Baptist Convention-affiliated evangelical megachurch, before joining up with Catholicism again.[10] While it's unclear what type of confusion could cause a person to completely reject, then be completely convinced, then completely reject again the factual assertion that an Angel named Moroni led Joseph Smith to the Third Book of the Bible in upstate New York in the 1820s, it probably has nothing to do with pandering to the voters.

Rubio supports shutting down the Department of Education,[14] expanding charter schools,[15][16] and teaching creationism in classrooms.[17] However, he also does support the teaching of evolution.[17]

He is an outspoken opponent of Common Core.[14]

In 2016, the NRA Political Victory Fund gave Rubio an A+ rating.[18] He is a prominent supporter of the Second Amendment.

In the wake of the mass shooting at Marjory Stoneman Douglas High School in Parkland, Florida, on February 14, 2018, Rubio stated that he is against a ban on assault rifles[19] but wouldn't go so far to suggest arming teachers.[20] After pressure from the Never Again MSD activists, Rubio announced his support for the ban of bump stocks as well as more stringent background checks.[21]

Rubio supports a full repeal of Obamacare[22] (because of course he does) and replacing it with tax credits and less regulation, saying that tax credits could be used for health insurance.[23]

Not surprisingly, Rubio is anti-abortion and opposes abortion in all cases, including rape and incest.[24] He strongly opposes Roe v. Wade, calling it an "egregiously flawed decision."[25][26]

Rubio thinks that LGBT issues should be left up to the states to decide. Though he is not overtly homophobic, he thinks that marriage should remain "traditional," between a man and a woman.[27]

Rubio does not like the current government of Venezuela and has advocated regime change.[28] He also doxxed the man behind the 'Salt Bae" meme for cooking for Venezuelan President Nicolas Maduro.[29]

Rubio has said that he does not think the Iraq War was a mistake,[30] though he would not have supported it at the time had he known there were no weapons of mass destruction.[31] He supports the current Saudi intervention in Yemen.[32][33]

Rubio is also vocal in his opposition to the Chinese government, including their camps in Xinjiang and crackdown of the 2019–20 Hong Kong protests

, enough to earn himself an individual sanction.[34] Given Rubio's own track record and defense of Trump's camps and crackdown of protesters, one has to question whether this is simply political opportunism.[note 1]