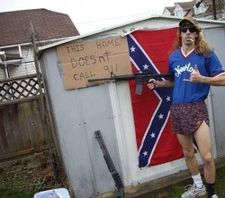 But this person still needs to be arrested for atrocious fashion sense.

Gun nut (or ammosexual) is a snarl word referring to a person (often, but not always, white, male and Republican, and usually in the United States, though they exist elsewhere) who not only believes in the right to keep and bear arms, but makes a point of doing so with gusto.

Like mall ninjas, gun nuts rarely refer to themselves as such, except in an ironic or sarcastic manner (much as PZ Myers and others have co-opted the term "evolutionist"), and typically call themselves gun owners, collectors, or enthusiasts. However, there are several points separating genuine "nuts" from the average gun owner.

Nearly all gun owners, including moderates on the issue, believe in the right to keep and bear arms for sport, hunting, historical interest, and in most cases self-defense. What separates the average owner from the nut is the degree of such support. Most moderate, non-nutty gun owners accept or even support some degree of gun control (background checks, at the very least), or at most grumble about it creating long lines and ammo shortages/purchase limits at gun stores. Where they do oppose gun control, it is mostly from a utilitarian direction, questioning the crime-fighting efficacy of measures like assault weapons bans.

Gun nuts, on the other hand, take a staunchly anti-regulatory position on the issue of gun control that veers into out-and-out crankery. Restrictions on semi-automatic (and in some cases fully-automatic) weapons, magazines that hold more than ten rounds, and "assault" features,[note 1] as well as measures like waiting periods for gun purchases and permits for ownership and carry, are seen as not only an unnecessary burden, but as a step towards authoritarianism and a threat to freedom. This is the position of groups like the Gun Owners of America[3] and the Jews for the Preservation of Firearms Ownership,[4] as well as, to a lesser extent, the more radical wing of the National Rifle Association.[5][6]

However this, in and of itself, is not a clear mark of gun-nuttery; one can take staunchly anti-gun control positions without being a nut. Some of them may not even own guns themselves, instead seeing it as a civil liberties issue.

Another dividing line between normal gun owners and nuts is the degree to which the idea of self-defense is embraced. Most gun owners take it as a given that defense of one's life, limb, loved ones, and property is an acceptable use for a firearm; the "castle doctrine" is rooted in this idea, as is support for concealed carry. The common refrain of responsible gun ownership is that one always hopes to never have to actually use a gun to kill another person, keeping it solely as a last resort in the event of the worst — a malicious home invasion a la the Manson Family, a spree killing, an attempted mugging or rape, etc. Even then, it is hoped that the mere sight of the gun, or the sound of it being cocked, would scare off any potential threats before things turned ugly.

Many gun nuts do not subscribe to this idea, instead keeping guns in the expectation of having to use them against intruders, robbers, or killers. While they may offer platitudes about hoping to never use their guns, their personal, unvoiced attitudes will differ. The guns they view as defensive weapons are likely to be more mechanically sophisticated[note 2] than simple[note 3] long guns or pistols; instead, they will argue that semi-automatic rifles are necessary to defend one's home.[note 4] Some go further and anticipate long-term societal breakdown and an oppressive police force or government (which has never encountered an executive power that the War on Terror didn't justify) as things to defend against.

In an example of horseshoe theory, the latter view puts them (perhaps ironically, since white racists may own guns at a higher rate than average) in line with the original Black Panther Party, which called for African-Americans to embrace gun ownership in order to stand up to police brutality, though the idea was hardly original to them as Frederick Douglass had written to the same effect nearly a century before.[7] Even more ironically, the position of the Black Panthers on the Second Amendment led directly to the passage, under Governor Ronald Reagan, of some of California's first gun control laws, with most of their chief backers being white conservatives afraid of black militancy; the galvanizing moment was when fifty Black Panthers brandishing guns marched into the California State Capitol as a protest.[8]

It's worth pointing out, of course, that the specificity, plausibility, and factual grounding of someone's beliefs about the necessity of preparedness for self-defence are relevant in whether that person can be called a "gun nut". If those beliefs are indeed reasonably specific, plausible, and well-grounded, then carrying a firearm may very well be a rational response to reality. The proportionality of the response to the perceived threat is also relevant: someone who goes to the store with an assault rifle over his shoulder is very likely to be a gun nut if he lives in a suburb, but not so much if he lives in a semi-wilderness area where conflict with large and dangerous animals such as bear or wild boar is a reasonably foreseeable possibility.

Embrace of conspiracy theories relating to gun control is perhaps the clearest dividing line between the average gun owner and the true nut. While not necessarily all gun nuts believe this crazy shit, there are very many that do, and this is probably the biggest decider if one is or is not a gun nut. As noted, a popular idea among gun nuts is that gun control is a threat to freedom, and that, by extension, the only way people could support it is if they have authoritarian tendencies or have been scared by those that do. As a result, they are often more inclined to believe that killing sprees committed with firearms, like Columbine, Virginia Tech, Aurora, Sandy Hook, and Las Vegas, were false flag operations or staged hoaxes carried out by the government in order to drum up support for gun control, and that the United Nations' proposed Arms Trade Treaty

, designed to crack down on smugglers and arms traffickers, is targeted at American gun owners.[9][note 5] Likewise, there tends to be a significant deal of cross-pollination and sympathy with the militia movement and the radical right in general. In the last few years, a great deal of Agenda 21 conspiracies have become especially popular with gun nuts.[10]

Many doomsday preppers are typically gun nuts, realizing the dire necessity of being armed to the teeth in anticipation of the imminent future in which we will all be forced to ward off BDSM-clad raiders sporting neon mohawks and gocarts. Since doomsday has yet to happen, no matter how many predictions are made, a number of extremists of these already fringe groups can't seem to wait and have turned those gun stockpiles on their fellow citizens and authorities.[11]

Prior to and during President Barack Obama's first term there was much distrust about ulterior motives of his administration to institute major new gun control restrictions, in the face of evidence that he did not significantly restrict American gun rights. To contrary, most of the gun-related bills he signed in his first term, thanks to being included as add-ons and riders to other legislation, expanded gun rights.[12] However, such fears were vindicated swiftly after President Obama was no longer eligible for re-election. Immediately after the first major mass shooting tragedy after the election, the mass murder at Sandy Hook Elementary School, President Obama spearheaded a massive push for new gun control restrictions,[13] just as the gun nuts feared. Due to the failure of the Democrat-led efforts in Congress to garner the needed votes to pass new legislation, the major gun control proposals failed, but President Obama was still able to institute limited new restrictions and bans via executive actions and policy changes that have the force of law. For example, he stopped the importation of old American World War II era military rifles (by private companies) that had been given to South Korea,[14][15][16] among other importation and ammunition bans.

Things that aren't necessarily signs of a gun nut[edit]

A common stereotype is that gun nuts own vast stockpiles of weaponry and ammunition, to the point of having a room in their house that looks more like an armory than anything. While many do conform to this stereotype, owning lots of guns is not a mark of a nut. Many people collect guns in the same manner as others collect dolls, mugs, DVDs, action figures, or other items, seeing it chiefly as a hobby.[note 6] Another subset of those owning many guns are target shooters, especially competitive target shooters. An additional subset are hunters, professional or hobbyists, that track many different types of game that require different types of guns (a gun that's great for quail hunting is definitely not one you should bring to take down moose).

Effect on the gun debate[edit]

The stereotype of the lunatic who sits on a stockpile of guns and ammo has frequently had a detrimental effect on the debate over gun ownership in America, with both sides buying into it to some degree. On one hand, responsible gun owners get legitimately offended by this stereotype when it is used by gun control advocates as the image of the "average" American gun owner, leading them to treat even reasonable gun control efforts with suspicion or outright hostility. On the other hand, gun manufacturers also seem to embrace this stereotype in their advertising, running ads seemingly aimed at this demographic, often directly linking guns with manliness.[17] Furthermore, it is always the loudest voices that get the most attention, and here it is no exception, with gun nuts getting the media spotlight by voicing positions on gun rights that few people can reasonably defend –– like that we should go start a violent revolution and shoot members of the federal government for trying to enforce gun control.[18] Since the best idea in the world to show you aren't a crazy violent fanatic is to make unhinged rants about shooting people who disagree.

Gun control advocates see all this and, incorrectly but not unreasonably, assume that most gun owners are like this, leading to the above. Which isn't helped when fewer than expected reasonable gun owners denounce these rants. There also tends to be a trend of these rants going off the rails like Ted Nugent publically denouncing gun control and Jews as the NRA stays quiet in the face of their members openly protesting.[19]