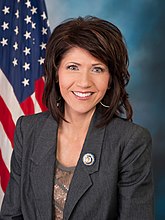 Kristi Lynn Noem (November 30, 1971–) is the current governor of South Dakota, coming from the Republican Party. Like most Republican politicians, she is a complete reactionary whose continued electoral success will make you want to give up on humanity. She's also her state's first female governor so... chalk this up as a victory for feminism?

Noem entered national politics in 2010, when she defeated Democratic incumbent Stephanie Herseth to become Representative of South Dakotas' one district in the House of Representatives.[note 1] This was actually a hard fought campaign as Herseth was quite popular, winning the 2008 election in a massive landslide. By aligning herself with the Tea Party Movement and saying her foe gave preferential treatment to family members as lobbyists, she managed a close victory in the context of a red wave which put the house under GOP control.

Of course, being elected as a Tea Party crackpot means you have to legislate like one. This means she opposed Obamacare, gay marriage, teaching kids climate change is real, and saying we should cut taxes while cutting funding on petty wastes of money like the EPA or Medicaid. During the Trump administration she supported his Travel Ban.

As yet another in a long list of crackpot lawmakers, what makes Noem stand out? She became governor of her state during the Trump era, when the Republican Party became openly authoritarian.

She ran for Governor in 2018, somehow managing to make a South Dakota Governor race close against her Democratic opponent Billie Sutton – for reference, the last time a Democrat won this office was 1974, and the last close race for it was 1986.

Her tenure is best known for the sort of COVID-related mismanagement you expect from a GOP governor.[2] She also encouraged people to come to the Sturgis rally in spite of the pandemic with predictable results.[3] To show how seriously she takes this, she used Coronavirus relief money from the federal government...to encourage tourism.[4] She downplayed the efficacy of masks through the whole pandemic regardless of silly things like actual science.[5] To defend this, she relies on pseudoscience pushers like the Association of American Physicians and Surgeons.[6]

She succesfuly overruled a state referendum legalizing marijuana by litigating it in court. Funnily enough, the judge she herself appointed overruled it! Bear in mind this amendment had the support of a solid majority of voters.[7] But activist government is bad and conservatives are here to save you from it! On a larger scale, she pushed the "voter fraud" false narrative during the 2020 U.S. presidential election.[8] She backed away from some of the more extreme views after the capitol riot, which she condemned, but instead began talking out of both sides of her mouth.[9][10]

For more fun, compare her mental gymnastics after the events of January 6th with her open loathing of more left-wing protests.[11]

But degenerate LGBTs are the REAL problem[edit]

She supported an anti-LGBT bill modeled after the infamous "Religious Freedom Act" Mike Pence proposed in Indiana,[12] which was disingenuously phrased as "protecting churches from closure" during COVID despite it being far more broadly worded.[13] She has also promoted transphobia in regards to sports teams, entering into quite the controversy over it,[14] and signed two executive orders banning trans women from high school and college sports.[15]

She has been hyped as a rising star in the GOP, which should tell you a lot about the GOP. Noem is being considered as a new running mate should Trump run in 2024 now that Pence is a RINO for not magically making Trump president in 2020,[16] and was invited to speak at CPAC. It has been speculated she would run for senate in order to primary John Thune (according to some people, even he's a RINO(!!) now) in 2022, but she said no despite Trump's insistence.[17] She has even been subject to presidential speculation...but again she has said no. Bear in mind it's only 2021, so she might well change her mind or just be playing coy the whole time - it has happened before.[18]