In mythology and folklore, a trickster figure is a god, spirit, person, or anthropomorphic character who exhibits a high degree of knowledge and intelligence, and who uses that knowledge to deceive people or other mythological personages, and who generally violates social conventions. Trickster gods and figures appear in a wide variety of myths and folklore.

Some examples of characters from folklore, mythology, or religion that manifest the trickster archetype include: 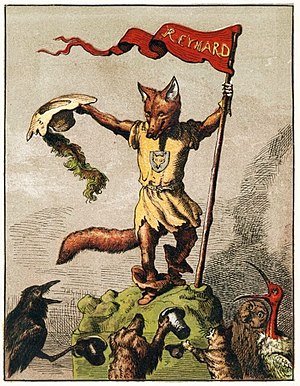 Reynard the Fox, a trickster figure from many European folklores.

Trickster figures are popular especially among the members of an underclass. The trickster figure turns the tables on bosses, masters, and other oppressive figures. Tricksters are often shape-shifters and are fluid with respect to gender.

Deities can be trickster figures. In Greek mythology, Hermes is the divine patron of thieves and the inventor of the art of lying, a skill he passed to his disciple Autolycus. The Homeric Hymn to Hermes calls Hermes a god of "many shapes (polytropos), blandly cunning, a robber, a cattle driver, a bringer of dreams, a watcher by night, a thief at the gates, one who was soon to show forth wonderful deeds among the deathless gods."[1]

The possibility that God may be a trickster is another thing that throws a monkey wrench into Pascal's wager; there might be a god who likes liars and thieves, and rewards vice or mockery rather than piety or virtue. History shows that such gods were in fact worshiped by attested religions.

From the portrayal of Loki in Marvel movies, to early Christianity, there has often been an emphasis on the "evil" aspects of the trickster figure in Western thinking. While the trickster figure is usually much more ambiguous and sometimes even venerated in the culture of origin, the trickster is portrayed in a negative light by most Christian sources that came into contact with the culture where the trickster figure originated. This goes as far as giving attributes of the trickster to the devil (who is not described in much detail in the Bible). As many cultures are only attested in writing through Christian sources (either because they had no own writing system[2] or because Christians eliminated most written sources[3]), it is often difficult to judge whether a trickster-like figure was viewed positively or negatively within its culture of origin.