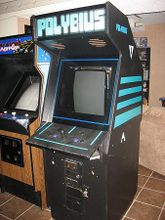 Polybius is a fictional video game. According to urban legend, the game showed up in Portland, Oregon and caused players to have various mental conditions. The first rumor about the game appeared on clickto.com then in coinop.org in February 2000 but it claimed the game was released in 1981.[1][2][3] While the CIA has proven that they are not above horrific psychological experiments on unsuspecting civilians, this has been proven false numerous times by multiple historians and experts. Conspiracy theorists claim it is part of MKULTRA.[3]

A simple video game can not induce a mental condition, and video games, as long as you are sane, have no effect on the mental state of the player (though a game with specific light patterns could induce epileptic seizures in a susceptible person, or induce hallucinations in someone who plays a game continuously to the point of sleep deprivation).

EuroGamer attributed the legend to stories about gamers falling ill in the early 1980s after playing games such as Asteroids and Berzerk non-stop for 24 hours or longer, while noting that conspiracies about video games were a prominent part of the 1984 movie The Last Starfighter (in which aliens use video games to recruit space pilots). However even EuroGamer notes there is a problem in the time delay from the early 1980s to the first documented mention of the legend.[3]

The legend does have some (very small) basis in reality: there were cases of stomach discomfort (due to both anxiety and drinking too much Coke), migraine headache, epileptic seizures, police raids in arcades (due to illegal gambling), sale of stolen goods and drugs, and truancy.[4] The United States military uses video games for training its soldiers.[4] There were also East German vídeo game arcades, known as Poly Play, based on pirated Russian CPUs, which were themselves pirated versions of Western games, which weren't wonders of engineering; due to these reasons, they were recalled after the Berlin Wall fell.[4]

The Youtuber Ahoy did an exhaustive search for the origin of the Polybius myth and concluded that it all centered around a coinop.org page created sometime on or shortly before 6 Feburary 2000[5] and was brought to the general public's attention in the GamePro #180 (Sept 2003) article "Secrets and Lies".[6] He also reasoned that people remembering seeing information on Polybius on Usenet in 1994 were actually remembering the Pink Floyd-related Publius Enigma

The Angry Video Game Nerd went over the Polybius story before going into what amounts to a creepypasta.[7]

The name of the supposed manufacturer of the game, Sinneslöschen, is nonsensical German for "sensory deprivation" or, more literally, "sense delete";[4] alternatively, it could be intended to mean "nonsense."

was a Greek historian who wrote The Histories, invented the Polybius square in cryptography,[4] and was known for his assertion that historians should never report what they cannot verify through interviews with witnesses.[8]

There have been several games that have used the Polybius name and have either presented as recreations of what might have been or as the actual game.

One of the homage games is at sinnesloschen.com and was created in DarkBasic by Rogue Synapse, a group that specializes on the recreation of fictional games. This version has been used in "discovery" videos of a Polybius cabinet.