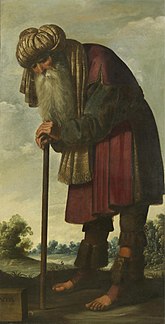 Jacob (Hebrew: יַעֲקֹב) is the third of the three patriarchs of the Jewish faith, "Abraham, Isaac, and Jacob." Jacob, after encountering an angel of the Lord and wrestling with it, changes his name to Israel, "He that has struggled with god." It is with Jacob that God makes a covenant to give him and the Israelites the territory that will be known as "Israel." His 12 sons would become the namesakes for the 12 Tribes of Israel.

Jacob's legacy as the "right to the land of Israel"[edit]

According to Jewish tradition, the entire story of Jacob from his birth to his death lays out the history of their land, Israel. It is also the entire premise for the Zionist movement, believing that the return to the Lands of Israel is not only God's desire, it was foretold in the story of Jacob. (Genesis 35:10-12)

Jacob and his older twin brother Esau are said to have fought their entire lives, including in the womb. But God, the nice, honest, and law abiding god that he is, decided to rig the situation so that the older twin serves the younger (and via the metaphor, his nation would serve Israel). Jacob deceives Esau into trading his right as firstborn for a bowl of stew, and then wears skins so that his blind father Isaac confers his blessing on him, thinking him to be the hairier Esau rather than the hairless Jacob. (Genesis 27)

How to be a Good Christian™ according to Jacob[edit]

Jacob is truly the best role model for all Christian family value types, especially those looking for any "out" for all those misdeeds.

Any American women older than 35 knows that Jacob's Ladder is a string game played between two kids. Movie goers will remember it as a Tim Robbins movie about a Vietnam Vet. Sailors know it as a rope ladder. Techies know it as a high-voltage traveling arc. Music fans know it as an awesome Rush song, about the weather phenomenon of the same name. But the original was Jacob's vision of a stairway (or ladder, depending on the translation) which had angels climbing up and down. From here, Jacob was told by God various messages and given various blessings. (Genesis 28:11-16)

In Islam, Jacob (or Ya'qub) is revered as a prophet of Allah and patriarch of Islam. However, Muslims, recognizing that lying is not really such a great thing, edit the story of the received blessing so that Jacob earns it, not lies for it. They also change the story of the sheep to be more upfront with Jacob explaining that if he can produce a better sheep through feeding and breeding than his father-in-law, he is allowed to keep them.[1]