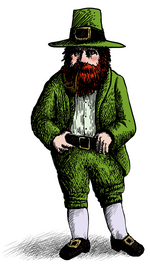 Leprechauns are mythical creatures said to live on the island of Ireland. Notable characteristics include their greed, love of trickery, short stature, and their modern incarnation's near total disconnection with Irish folklore. Capturing one is notoriously difficult, although rainbows reveal the locations of their treasure hoards. Their name comes from the Irish word for "shoemaker," as they were in many early representations shown fixing a pair of shoes. A "clurichaun" is a continually drunk leprechaun.

Along with unicorns, dragons, and Chupacabra, they are often used as a metaphor for a personal God in arguments against theism.

A leprechaun was supposedly spotted in a trailer park near Mobile, Alabama.[1] Another is notorious for stealing children's breakfasts[2] and yet another for representing the Boston Celtics.[3] One is known for appearing in awful horror movies;[4] others are known to work for the reconnaissance division of the Lower Elements Police, and in doing so make the world's worst pun.[5]

This mythology-related article is a stub.
You can help RationalWiki by expanding it.
Retrieved from "https://rationalwiki.org/w/index.php?title=Leprechaun&oldid=2459402"
Categories:
Hidden categories: