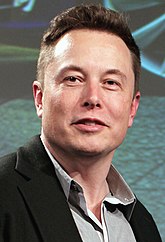 Elon Reeve Musk (born 1971) is a high-profile businessman, best known for his SEXY S3XY electric vehicles and his plans to colonise Mars,[2][3][4] and is currently the wealthiest person in the world, beating out Amazon founder Jeff Bezos at the beginning of 2021.[5] He is also the embodiment of the hi-tec messiah complex of the 21st century with a detailed history of terrible twitter shit-posting.[6] Musk is notable for massively promoting several firms that have pushed cutting edge innovation forward in the fields of green technology, cars in space, artificial intelligence, hyperloop, and space travel and several charities including the Tesla Museum. He is considered by some as one of the world's most influential people and a major player in alternative-energy technology and future spaceflight. Musk is, however, also notable for defending questionable labour practices[7] and anti-union practices[8] at his manufacturing companies and having a strange view of modern capitalism. In the last couple of years Musk has found endless controversy (and legal problems) with bizarre and even despicable tweets ranging from COVID-19 denial, market destabilizing comments and baselessly slandering a hero as a pedophile.[9]

Elon Musk was born wealthy, as are so many billionaires. His father owned an emerald mine in Zambia and Elon lived a lavish lifestyle in his youth because of this.[10][11] 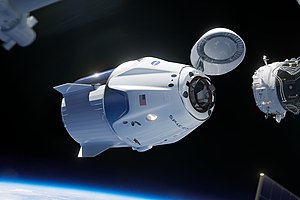 Rendering of the SpaceX Dragon 2 reusable space capsule. The Dragon 2 comes in two variants, one for human spaceflight and the other for cargo.

Either the logo of the most valuable car manufacturer in history or the drawing of a uterus.

Tesla Motors is a car company figure-headed by Elon Musk. It is famous for being the only company with a commercially available car floating in space. It makes electric cars, which made the news for catching fire.[17][18] As it turns out though, while Teslas caught fire, they did so at a much lower rate than the cars relying on controlled explosions of flammable material.[19] It also makes cars that can drive themselves, but they often seem to crash while driving on their own.[20]

In late 2020, Tesla hinted that they would begin accepting Bitcoin for cars, which sent the already overpriced bitcoin even higher. In early 2021, Tesla bought $1.5 billion in Bitcoin,[21] and then in March made the actual announcement they'd sell cars in Bitcoin. Bitcoin skyrocketed even further, making Tesla's Bitcoins even more valuable. Then Tesla began selling off their Bitcoins,[22] whereas Musk loudly insists didn't happen,[23] just before refusing to accept bitcoin for their cars in May 2021.[24][25]

But there's another explanation that doesn't involve insider trading or market manipulation. During those two months, numerous problems with bitcoin purchases became apparent, at least for the consumer. To purchase a Tesla, you have to place a deposit of $2500 or equivalent value in bitcoin. If you cancelled before the car was made you got a refund, but if the deposit was made in bitcoin, Tesla got to choose whether to pay you bitcoins or cash. I.e., if bitcoin went down, you got bitcoin, but if it went up, you got cash. The US also has "lemon laws" for defective cars, colloquially known as "lemons", where you can be compensated if the manufacturer gives you a lemon. But if you paid for your car in bitcoin, you guessed it, Tesla could compensate you in whichever currency was worth less.[26] Purchasing itself was a hassle; when given a quote, you had 30 minutes to complete the purchase or you would have to get a new quote.[27] This was needed because of Bitcoin's notoriously volatile price, as otherwise the purchaser could change their mind as bitcoin fluctuated. Most charitably, this whole debacle was such a miserable experience for everyone involved, and not the image that Musk wants for Tesla.

Elon and the terrible, horrible, no good, very bad Tweets[edit] 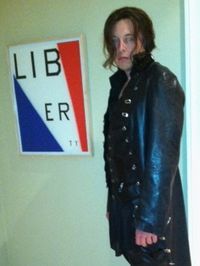 Despite being a rock star of scientific progress and innovation, a busy professional with a million things to do and a good understanding of the essential importance of good communication, Elon still finds time to tweet stupid shit every now and then.

Taylor Harris: What would you proclaim yourself as? Anything specifically?[30]

Musk: Marx was a capitalist. He even wrote a book about it.[32]

See the main article on this topic: Trade union

Musk: If you must know, I am a utopian anarchist of the kind best described by Iain Banks

Musk: Iain certainly wasn’t pro-union in the Culture books. At all. And wouldn’t be in the case of Tesla. Banks was about freedom through & through. Maybe for a single buyer (monopsony) vs single seller (monopoly), I would be too, but that’s a special case.[35]

Doctorow: Banks consistently endorsed the freedom of workers to form collective bargaining units. The existence of a thought experiments in which this was obviated by eg FTL [faster-than light travel] is by no means an indication that a marginal improvement in EV tech would have turned him into a strikebreaker[36]

Musk: I endorse freedom to form a union too, as well as freedom not to do so if they feel Tesla is a good company. UAW has major conflicts of interest & failed our car plant already when they abandoned us in 2010. Tesla can only hire 5% of applicants, so must be doing something right.[37]

David Slack: Unions don’t exist only at “bad” companies, Mr. Musk. They exist to provide workers with a voice to negotiate with management, insuring that conditions do not become intolerable or unsafe, that good companies do not become bad ones. Good companies should welcome unions.[38]

Musk: You think all companies are bad and all unions good? That’s a very bigoted position.[39]

According to Musk an over-generalization that no one ever said about labor practices...is synonymous with offensive commentary on people such as African Americans or the LGBTQ+ community.

After his flagship company Tesla posted a massive loss it could be imagined that analysts would want to know why. Musk was busy telling everyone that things were fine when he said:

"Boring bonehead questions are not cool. Next," ... "We're going to go to YouTube. Sorry, these questions are so dry. They're killing me."[40]

This briefly bummed out the investors and Tesla stock dropped 5% (about $3 billion).[41]

Musk appears to be denying/reducing the impact that the 2019-20 COVID-19 outbreak is having on the world.

The coronavirus panic is dumb[42]

Based on current trends, probably close to zero new cases in the US too by the end of April[43]

In May 2020, Musk opened his Fremont, California Tesla factory in defiance of Alameda County health orders. As a result, he personally caused 450 COVID cases.[46]

In 2019 Musk tweeted that the company may go private.

For whatever reason he did this, who knows, he broke the law as it was of a speculative nature. While the company wasn't destined to go private, the market took the tweet seriously and some investors lost millions in the speculation game. Investors initiated a law-suit which is still in the courts.[48] Somehow Musk survived this colossally stupid move.

However clearly this wasn't enough. In 2020 while he was busy denying the serious nature of COVID-19, he also made a casual claim that his company was "over-valued".[49]

This led to a huge drop in market value with himself losing billions in value. It is unlikely any of this will stop Musk making stupid pointless destructive comments in the future about the value or future of the company.

On May 17th, 2020, Elon Musk tweeted an apparent call to "Take the Red pill", which is a common alt-right trope symbolizing admitting their point-of-view as the truth. [51]

Although the rose is a symbol of Social Democracy, Elon Musk is known to be strongly against this position.

Elon Musk, despite his brainchild Tesla being well-known for its inclusiveness of LGBTQ+ people, has also made quite a few attacks on the use of pronouns for non-binary transgenders. After facing much backlash after infamously tweeting "pronouns suck"[53], Musk went on to make the following even-more damning follow-up tweet a few months later:

It also didn't help Musk's case that he additionally shared (also on Twitter) an image of a soldier rubbing his face with bloody hands, with the caption ""when you put he/him in ur bio"[54]- a very tired meme often made by antifeminists and conservatives when ranting about America's loss of so-called "manliness".

Musk was very critical of Donald Trump until Trump became President. Musk then changed his mind and joined Trump initiatives including a council of business advisors and a project to promote manufacturing in the US.[55][note 4] Musk's attacks on the media's lies seemed in accord with Trump's complaints about fake news and were supported by the President's son Donald Trump Jr.[56] He also supported Trump's campaign to shift global tariffs on car imports and exports to be more favorable to American car exports.[57] He left Trump's Presidential council in June of 2017, citing Trump's withdrawal from the Paris Climate Agreement.[58]

A mixture of overwork, substance abuse, fame, gross insecurity has cracked his head. In recent months he has posted misguided, possibly illegal as well as frightening tweets. They include suggestions that Tesla would go private (without detailing sources of funds) and then backtracking the claim. Prosecutors have opened an investigation on possible financial fraud (as the shares in the company went up sharply after the announcement. His other tweets range from self aggrandizement to semi-misogynistic comments and worse. He admitted a reliance on stimulants and depressants to fulfill his work load and a few hours of shut eye. Two high level members of Tesla resigned after Elon openly smoked pot on a pod-cast with Joe Rogan. Musk suggested we live in a kind of real life Matrix, and his reasoning is humorously reminiscent of the logic used in Roko's basilisk:

"If you assume any rate of improvement at all, then games will be indistinguishable from reality, or civilization will end. One of those two things will occur," Musk said. "Therefore, we are most likely in a simulation, because we exist." —Elon Musk [59]

Elon's most ghastly batshit-insanity is the accusation of a child-rescuing hero of being a pedophile. While several young soccer players were stuck in a cave, Musk flew to Thailand and tried to offer help however he could.[60] Regardless of whether or not the suggestion that his mission to help out was nothing but a PR stunt, it seemed his help was rather useless and was getting in the way.[61] A semi-professional spelunker, Vern Unsworth helped bring the trapped children to safety.[62] He was critical of some of Elon's efforts to help including criticism of the feasibility of Elon's proposed amazing-cave-submarine-child-rescue-awesome-mobile.[63] Unsworth risked his life to reach the boys, comfort the scared children and rescue them.[64] As thanks for this he was accused of being a pedophile by Musk.[65] Elon's petty hissy-fit in the form of a vague accusation of pedophilia didn't go away even after Elon deleted the tweet and gave a half-hearted retraction.[66] A week later Elon sprayed a full out pedophile on social media...twice.[67][68]

In September 2018, Unsworth filed suit for defamation, with Musk somehow winning,[69] despite none of his accusations having a shred of truth to them - the Private Investigator hired by Musk having scammed him.[70]

During the trial, he essentially defended his right to be a Twitter troll.[71]

See the main article on this topic: Simulated reality

Musk believes in the theory that all of existence is a simulated reality, and has dedicated millions of dollars towards proving an unfalsifiable hypothesis true,[72] rather than using that money to do something beneficial. Presumably he believes in this theory because he believes it could absolve him of any accountability regarding his actions.