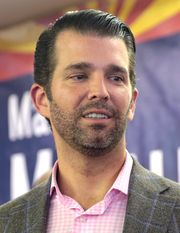 Donald John Trump Jr. (1977–) is the eldest son of disgraced former president Donald Trump. Much like his father, he is a conspiracy theorist and an extraordinairy wingnut. He has also hinted he will run for office in the future, just to have 'pwned the libs'.[1] That he is relevant at all, despite never having held office, only being wealthy by dint of nepotism, and barely even qualifying as a talking head, is a sad display of what a personality cult the GOP has become. He is important to conservatives simply by being the son of Donald Trump.

Junior has been known for pushing the white genocide conspiracy theories. He retweeted a post on Twitter about white genocide.[2] He also said that Mike Cernovich, who supports the theory, should get a Pulitzer Prize.[3] Another strong indicator of racism is his willingness to appear in a public event with somebody like neo-Nazi Jack Posobiec.[4] Trump Jr. supported a birther conspiracy on 2020 Democratic Presidential candidate Kamala Harris.[5]

He was investigated by Robert Mueller for his role in getting his father elected in a highly contentious and controversial 2016 U.S. presidential election.[6] On November 6, 2019, Trump Jr. tweeted the name on his official Twitter account of the alleged Trump-Ukraine whistleblower and publicized the name of a CIA agent, thus putting their lives and their families' lives at risk.[7]

Another conspiracy theory that he spread was engaging in holocaust denial by falsely smearing George Soros as a Nazi collaborator.[9] In February 2018, after the Marjory Stoneman Douglas shooting, he pushed a conspiracy theory about a survivor's father, who served in the FBI.[10] He also called for "total war" after it started to look like his father lost the 2020 election,[11] and threatened some of the more reluctant Republicans in Congress.[12] As you might expect from those comments, he is a person of interest in the capitol riot investigation,[13] to the point of texting ideas for overturning the results of the 2020 US presidential election to then-White House Chief of Staff Mark Meadows.[14]

This politics-related article is a stub.
You can help RationalWiki by expanding it.
Retrieved from "https://rationalwiki.org/w/index.php?title=Donald_Trump_Jr.&oldid=2452838"
Categories:
Hidden category: