Megalodon (Otodus (Carcharocles) megalodon) is an extinct species of massive shark from the Miocene and Pliocene. It is quite possibly the most overhyped animal ever.[citation NOT needed]

Megalodon first appeared in the fossil record around 15 million years (hereafter typed as MA) ago, during the Miocene epoch.

Megalodon is mostly known from its eponymous big teeth, which can get up to 18 centimetres in length. They look similar to those of an extant great white shark, but there are some significant differences, particularly in the shape. (An image will be provided as soon as I can get one.) As such, estimates of the creature's size varies, but it's generally accepted to be 15-18 metres in length, with a mass of up to 50-60 tonnes. As such, it was one of the largest fish of all time.

Megalodon is often depicted as similar in form to a great white, but it almost certainly did not look entirely like one. It was definitely a heavily built shark, but any similarity to great whites, living or dead, is purely coincidental, as the two sharks were from two different families of the same order (Carcharodon carcharias is from Lamnidae, Otodus (Carcharocles) megalodon is from Otodontidae, both families are part of Lamniformes). In any case, it probably had features similar to those of multiple different groups of Lamniform sharks. 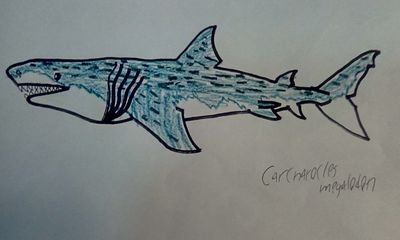 For instance, this depiction of a megalodon shows it with a head resembling that of a basking shark.

Megalodon fossils (again, almost always teeth) are known from mostly mid-latitude to subtropical areas throughout the world, including North and South America, Europe, Africa, Japan, and Australia. Populations from the Southern Hemisphere on average tend to be somewhat larger than populations in the Northern Hemisphere in terms of individual size.

Megalodon shared its environment with all manner of predatory whales, most of which (in particular, the colossal Livyatan

) were related to the modern sperm whale. Some other animals megalodon was contemporary with included such things as: Paleoparadoxia

, a large animal related to sea cows that looked like a cross between a manatee and a hippopotamus; Pelagiarctos

, a close relative of the narwhal that resembled a walrus; Eurhinodelphis

, a dolphin with an excessively long snout, possibly convergent with marlins; and Thalassocnus

, a semi-aquatic relative of the famous Megatherium, in addition to more familiar animals like "Balaenoptera ryani

Megalodon's cetacean rivals went extinct during the Pliocene due to being outcompeted by orcas. Things were going okay for megalodon until the Pleistocene rolled around, resulting in the ocean cooling enough that great white sharks started coming down from polar waters and further outcompeting it. The last time megalodon appeared in the fossil record was about 2.5 MA ago, and is almost certainly extinct at this point.

A lot of terrible information is circulated around the Internet about megalodon. The most common false claims about this shark will be featured below.

Okay, technically this one could be true, given how birds are dinosaurs, but generally, when someone says this, they mean the ones that are not birds. Ya know, the ones that died out in the K/Pg extinction? Ya know, the extinction that occurred 51 MA before megalodon even began to show up in the fossil record? Yeah, that one.

To put it bluntly, there is no way Otodus (Carcharocles) megalodon and Tyrannosaurus rex would have ever been able to duke it out. There were large sharks in the Cretaceous though

, which presumably had the occasional tangle with dinosaurs. Still, Cretoxyrhina is from a different family than Otodus, and therefore, it is not megalodon.

This has been said earlier on the page, but there area still a lot of reports of megalodon teeth dated to significantly younger than 2.5 MA old. Most of these are either due to the teeth retaining their white colour in the fossilization process, or getting covered in a thick crust of some sort of mineral precipitate, usually manganese dioxide. Occasionally, the teeth are the result of the "zombie effect"

, in which a fossil gets uprooted from the rock encasing it and re-deposited in significantly younger rocks.

Needless to say, certain breeds of crank still claim that megalodon is still out there, citing a few eyewitness accounts of massive sharks exceeding 10 metres in length. Given what pop culture says megalodon looked like, these are probably just great whites viewed without any references for size available.

Megalodon hid out in deep water[edit]

A common claim to support the above is that megalodon managed to survive the Pleistocene ice ages by hiding in deeper waters, like the abyssal zone of the ocean. All evidence points to the contrary - megalodon preferred shallower, warmer water, preferably with lots of large animals like whales, sea cows, and the aforementioned sloths, narwhals, and desmostylians for them to feed on. Also, we have yet to find a single globster that can be identified as megalodon as opposed to, say, another large shark like a basking shark.