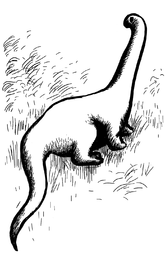 Unlike other fictional monsters, this one doesn't even have a cool picture.

Mokele-mbembe is a mythical creature often described as a dinosaur, often a sauropod, which is claimed by some people to live in Lake Tele near the Congo river in Africa. There is no scientific evidence for the existence of this creature. The example of Mokele-mbembe is sometimes used by creationists to justify their belief that dinosaurs and humans coexisted.

Mokele-mbembe, roughly translated from the Lingala as "One who stops the flow of rivers," is a traditional folk creature in stories told by the peoples living in the Congo River basin. Western reports of this creature date back to 1776, when a French missionary in the Congo reported giant, lizard-like footprints. The creature's notoriety became widespread in 1909, when several Europeans relayed these local myths to the European press. One witness, German Army Lt. Paul Gratz, claimed in 1911 to have been shown the hide of a hippo Mokele-mbembe by natives. The animal was also reputed to kill or even feed on hippopotamuses.

Later in the century, scientists and explorers launched expeditions into the Congo to locate the creature. Cryptozoologist Ivan T. Sanderson claimed to encounter the most amazing mushrooms Mokele-mbembe in Cameroon in 1932; most others settled for footprints or for testimony from natives. An American missionary, Reverend Eugene Thomas, related a story in 1979 that natives killed a Mokele-mbembe and ate its flesh; according to his account, all those who ate the creature's meat died soon afterwards.

Despite these various expeditions, claims of footprints and hides and second or third-hand testimony, there haven't been any verifiable eyewitness accounts of the creature. As with any cryptid, there are occasional photographs and video footage that is either too unclear to verify, or turns out to have been hoaxed.

British travel writer Redmond O'Hanlon, upon visiting the Congo in 1989, found that most natives believe Mokele-mbembe is a spiritual entity rather than a physical being, which would make any search a fool's errand. A BBC team in 2001 asked a group of Aka tribesmen to identify the Mokele-mbembe; they said it resembled a rhinoceros, which isn't found in the Congo (but a description might have been passed to them via word of mouth).