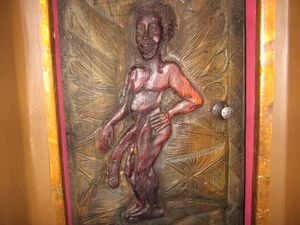 You are now a janitor. Here's your mop and bucket! I'd block you so you can practice undoing it, but I think it would be more fun if Mustex did it. ħuman

I've got no idea whether I should be honoured, non-plussed or angered. So thank you/meh/damn your eyes, whichever one's appropriate. I'll try and wrap my pitiful mind round what I'm meant to do. Maybe such feats as unblocking yourself come easily to you tecno-magi but I might as well be trying to pilot a rocket ship where all the dials are in chinese. This is the first forum/wiki anything I've ever joined.Little Bobby Oppenheimer (talk) 19:04, 4 February 2010 (UTC)

In the almost unfathomable unlikelihood that someone should wish to leave a message, I must apologise for any seeming rudeness as I am frantically trying to get into art school, and will be for the next month or so, my visits to the site will be erratic at bestLittle Bobby Oppenheimer (talk) 19:10, 4 February 2010 (UTC).