Glad to see that you got that archiving question resolved.--Herbert the Hamster 18:32, 5 December 2008 (EST)

Thought that we were old friends by now. How's the problem with the old premature archiving going?--Herbert the Hamster 18:34, 5 December 2008 (EST)

I've admitted that I came to this site mainly because I disagree. I am offended by this site, which calls itself 'Rational' in the title, taking the politically correct line and women and other issues, which I consider quite irrational. If RW should ban me for disagreeing, then how can you criticise CP for doing the same?

My 'insult' to Armondikov was really meant as a joke.

Remember I'm just trying to get across what I feel is the truth, same as you. User:God hates haters

That's the point... what you feel as the truth. You haven't offered any rational basis for your "feeling". That's what most people mean when they think of something as rational. Your views are not only irrational but offensive too. WazzaHello? Is there anybody in there? Just nod if you can hear me... 02:06, 7 December 2008 (EST)

Also, please leave PFoster alone. Why do you persist in hassling this user on their talk page when they have expressed a strong desire not to talk to you? ħuman

Here you go! Don't drive proxies while over the legal limit. Proxies may cause blindness. Proxy use in California is limited by law to liberals only. Proxies are not a substitute for safety harnesses. DogP 14:06, 7 December 2008 (EST)

I thought this was supposed to be a fun place, but it feels more like I dropped into the middle of a war zone... I guess it's back to occasional lurking... sorry for disturbing you at all, no harm meant... --Rose Pedals 16:26, 10 December 2008 (EST)

It's probably safe, despite being mildly hectic. Welcome back, anyway. weaseLOId

Because using sexual orientation as an attempt to insult is low and hateful and I have no room in my life for homophobia. PFoster 22:30, 23 December 2008 (EST)

But isn't 3 years too much time? I mean I'm not even a fucking homophobe. Rob Halford who is the singer for Judas Priest which is one of my favorite bands is gay. The name is a joke my friends use to describe shitty bands (Like the Poop Fighters) we don't like --Jonasbrothershater666 22:33, 23 December 2008 (EST)

If you called someone "nigger" or "kike" would you expect any different. You used faggot as a hate word, and you had the unfortunate luck of doing so after an unfortunate experience with a misogynist/homophobe troll. I've unblocked you. We're done talking. PFoster 22:36, 23 December 2008 (EST)

You shouldn't block for 3 years for it. Give him a warning first not to use that kind of language. Isn't there some don't bite newcomers rule or should we copy it off Wikipedia and use the GNU license thing? He may not have realised that this is a place for grownups and when he get over 15 he too can contribute in a grown up manner. - User

I renamed you per your request. I also re-registered your old account and will email you the password so you can reset it. Don't forget to change any special files (like for your signature) that use your old username. ħuman

You can ban this account for as long as you want, but can you please not do the IP vandal thing? That seems a little too severe --Gene Simmons 16:30, 29 December 2008 (EST)

I will. I will start making better edits from now on as long as you remove "All IPs associated with User:Gene Simmons" from the vandal registry --Peter Criss 08:10, 30 December 2008 (EST)

So now the members of KISS are 1) telling us how long we are allowed to block accounts for, and 2) offering to make "better edits" if we bow to their demands? Come on now, don't be silly. ħuman

My mistake, I thought it was unprotected since someone was able to come in and make changes, I guess it doesn't cover moves? --Kels 17:31, 1 January 2009 (EST)

Actually, that makes no sense. The tab said "Capture", which means it wasn't protected in the first place, so how'd I unprotect? --Kels 17:33, 1 January 2009 (EST)
I think you meant to protect it but forgot to pull down the menu to "sysops only," which then unprotects it, even if it was already so. We WANT it protected, right? TheoryOfPractice 17:34, 1 January 2009 (EST)

I dunno--what with all the trolling we've been having here, some guy with only a handful of edits redirects his user page to the main page--looks kind of weird, y'kow? TheoryOfPractice 12:45, 3 January 2009 (EST)

In an effort to update our sometimes too-vague and too-often ignored current Community Standards, I drafted a possible update of them. The draft can be found here. I invite you, and the rest of the site, to discuss this important issue.

Now this is a real woman. 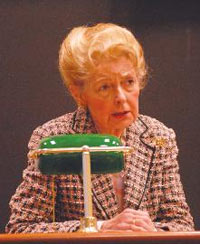 I think that, perhaps, using the same name here and on CP is a bad idea. I'll set up another account with my real name (NTemple). I'm gonna blank my talk page out, but could you, perhaps, block my account as a CP vandal, or some such nonsense after I do so? Thanks--BWatson 22:31, 11 January 2009 (EST) P.S. Delete this too, if you could.

No. We don't block for such a reason. Or for fundamental incompetence at sockpuppeteering. TheoryOfPractice 22:37, 11 January 2009 (EST)

Picking on the little guy...[edit]

is not nice. While the mockery is appreciated- advice would be nice... if you were feeling charitable, that is (judging by my new info box, I find that unlikely).--NTemple 22:56, 11 January 2009 (EST)

1. New posts on the bottom of the talk page please. 2. Someone told you to read our article on socking up; that would be a start. The link is mentioned on the WIGO:CP talk page, I believe. 3. Come on, you guys are horrible, and BWatson is a lost cause, TK has already blocked him for a day, and while he may not be dead, he certainly smells funny. (That's a Zappa quote; ask your parents), so outing him--which you already did, is moot. TK reads this site (*waves*: Hi Terry: you don't call, you don't write....so sad.), so you can rest assured he's well aware of how badly you goofed. Take a few days, read some WIGOs, take it slow, and don't try and blow your load as soon as you get onto CP. RELISH the experience...TheoryOfPractice 23:02, 11 January 2009 (EST)

There's plenty of us non-gurus who probably would have done the same thing. CorryMom signed me up for the army, just because the fat man dared her to. 19:11, 13 January 2009 (EST)

Where do you get off?[edit]

i am not a sockpuppet of anybody, right? present evidence before making wild accusations. Father Jack Harkness 14:28, 17 January 2009 (EST)

What are you doing? - User

I've had nothing but bad feedback on this site and RWW about my blatant abuse of powers. Point taken; I don't need them to do what I enjoy most--WIGOs, edits on political articles, etc. (*sheepishly* - My user page is locked from FD's vandalism Unlock it for me please so's I can remove the sysop pledge...) TheoryOfPractice 19:29, 17 January 2009 (EST)

You don't have to desysop yourself, just show some restraint. Unless you strongly object I am going to give you your rights back. - User

19:31, 17 January 2009 (EST)
I strongly object. I like this place a lot and take it too seriously sometimes: guilty as charged. Dude, in one week I've destroyed the database, issued a harsh block and edit-warred with CUR. For now, I'm happy to be promoted to editor. TheoryOfPractice 19:34, 17 January 2009 (EST)

The data base wasn't your fault, it take some experience in dealing with them to realise why you should not do that (you know Ed make even bigger mess at WP and they let him stay on). Everyone edit wars with CUR he doesn't understand talking. Blocks are reversible and all you have to do is stop and think whether the block is for you or RationalWiki? - User

(EC)I've unprotected your page, as asked. Edit warring with CUR is to be expected; unfortunately it's often the only option. The other stuff is just acting rashly, which everybody does sometimes. Stay an editor if you're sure that's what you want, but if you change your mind I'm sure anybody will be happy to demote you again. You do a lot of good work around the site. Wẽãšẽĩõĩď

Thanks, Weasel, appreciate it. I love this place--smart people, lulz, doing the right thing, fighting the bad guys, all of that. I know I've pissed off some people here, and for now there's enough janitors to go around--and to help keep this place the place I love so much. TheoryOfPractice 19:48, 17 January 2009 (EST)

TOP, anything you have done wrong I pioneered and mastered, and still continue to fail at (OK, except for the DB crash, but any of us might have done that, you just got there first). Do not chastise thyself so harshly. See RA's user page for a list of my sins ;) ħuman

But everyone has edit warred with CUR. The red exclamation marks are disconcerting. Phantom Hoover 11:35, 18 January 2009 (EST)

Rollback is faster than undo and you can lock your page again? - User

I've handed out a mop again. You can hand it back in when you've finished.

The vandal bin means that editors can only edit one an hour if they've been placed there. It's meant to take the place of blocking...and the right word is "condolences," not "congratulations." TheoryOfPractice 17:33, 18 January 2009 (EST)

I was in the middle of moving the comment too and got EC... just so you know I'm not wholesale deleting your remarks. CorryMom signed me up for the army, just because the fat man dared her to. 18:02, 19 January 2009 (EST)

No, I thought the Michigander had just that minute signed up and you were calling them a sock--I didn't realise pi was welcoming people who signed up hours ago...TheoryOfPractice 23:25, 22 January 2009 (EST)

I was just going through the user creation log to welcome people so we don't look rude. - User

Blocked. Again. I lasted slightly longer, but I got busted on an ip catch. I made the mistake of using the same computer I used as Watson ONCE to make an edit as Reynolds. I am so bad at this.... Though I did make the WIGO page again! --NTemple 01:08, 25 January 2009 (EST)

Hi here is something that Nx made, that I tried to club together for you. Copy the commented out material

to User:PolarBearInTheJungle/Archive 5/monobook.js and CUR and my signatures go away. You will need to set you preferences to just normal monobook and refresh ctrl+F5. - User

You haven't tried your new toy out yet? - User

Moved to a debate page.

I have sent you a monumentally unimportant email[edit]

Thanks for cleaning up my edit to the whaling section. The fact tag should be unneccesary, just create a sock on CP and ask KotomiT, or just ask me (I'm Half Japanese),