From RationalWiki
(Redirected from Vandalism)
Jump to navigation Jump to search

Wandalism is a neologism popular on this site,[1] which means "wiki vandalism". Commonly called vandalism on most wikis, it consists of editing an article (or any page) in a destructive way, such as blanking pages or replacing them with irrelevant, inappropriate, or satirical monkies. In other words, wandals are the sons (and daughters) of Satan himself! Death to all wandals! Kill, kill, kill, kill! 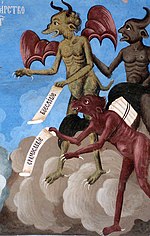 (e.g. "keying" a car, graffiti on a bridge, destruction of real property). This kind of destruction can cause permanent damage, or take a lot of time and money to repair. Wiki vandalism, on the other hand, simply consists of making edits that the wiki owners or admins don't like, and can typically be undone with a few clicks of the mouse at no financial cost. There are similarities in that both forms of vandalism are destructively motivated, and show a disrespect for the object of vandalism (property or wiki), but the effects are much less devastating.

On a wiki, particularly one that is open to any user to sign up, the concept of "vandalism" is very weak. When a user has signed up, it is then up to the site owner or admins to decide who to give edit rights to and what edits are considered useful. Although it is usually very easy to distinguish vandalism from a legitimate edit, unlike parody which can be very subtle, how it is defined depends very much on a given site's rules (or lack of them). As any edits not considered useful can readily be reverted in seconds, leaving no damage whatsoever to the wiki, it is considerably different to physical vandalism. Hence our use of the sillier and less brutal-sounding word, "wandalism".

For example, an editor adding an original thought to Wikipedia would be committing wandalism, as original research is against that wiki's policies. In a similar fashion, an editor adding anything vaguely true to Uncyclopedia would be guilty of kitten huffing wandalism. Somewhat ironically, any editor adding thought or truth at Conservapedia will not only be adjudicated guilty of vandalism (and summarily hanged and banned), but probably sockpuppetry, trolling, being AmesG, cyber-terrorism, and being 95% liberal as well. Godspeed!

Wandalism is not the same as the negative version of "hacking" — breaking into a website (or computer) in order to render it ineffective for its owners' purposes. No level of hacking is involved in wandalism, since wandals are only doing what the wiki is set up for users to do: freely editing website content. The only thing that makes them wandals is that they are editing the content in ways not in accordance with that wiki's goals. Occasionally a bot may be used to perpetrate a large number of wandalous edits quickly, since wandals are swiftly blocked once noticed, but this is still only using resources which are available to more productive editors.

How it works, or doesn't, here

A real wandal infamous for his wandalism. Obviously deserving of being sold into slavery or being confined at Alcatraz

On RationalWiki, a wandal is an editor whose contributions might be unexpected in form or content. Boring wandals insert quote-mined comments about creationism on our evolution article, while interesting wandals replace pages with "pwned by XX" or insert some kind of provoking remark. Wandalism, therefore, should be funny at the very least so that archiving it is worthwhile. The very best wandalism simply becomes part of the article if the mob likes it, of course. This particular form may be indistinguishable from so-called "normal" editing here,[2] and often committed by otherwise "respectable" editors. Alcohol may of course be involved, along with other drugs.

Can you spot her?

"Lopezing", also known as "easter-egging", involves replacing images present on an article with slightly altered versions of the same image. The altered image will typically be altered to contain vocalist Jennifer Lopez hidden in the background. The goal is to hide J Lo. in the image so discreetly that only fellow wandals notice. However, those dedicated to the cause of counter-wandalism have effectively de-Lopzed all affected images on RationalWiki.

The worst kind of wandalism deals with altering the format of an article with intention to promote oneself rather than provide information. This may involve adding links to one's social account, or citing one's own unrelated work as a source. Plugging may also extend to companies — such as North face — promoting their products.[3][4]

How to appropriately deal with wandalism

It's important to remember that the Geneva Convention does not apply in the Global War on Wandalism. Therefore it's a good idea to adopt a take no prisoners policy. Torture and show no mercy! Make the wandals cry and sob! Hardblock them all! Burn them at the stake like witches! If you must take prisoners, send them to Gitmo or Alcatraz and lock them away for eternity! Report them to FDACS and the Department of Homeland Security! It doesn't matter if they're young, old, male, female, white, black, Christian (Christians don't wandalize), Muslim, atheist, etc, treat them all the same. Wandals aren't even human anyway! (They're wabbits ducks wabbits, and it's wabbit duck wabbit season!) Punishment should be equal opportunity! Yes, wandals have feelings too, you get bonus points for hurting their feelings!

Or, you could do this: Revert, Block, and Ignore. Don't feed the troll any more than you have to; wandals love attention. In Wikipedia and Conservapedia, abuse reporting is sometimes a good option, but it's important not to make a spectacle of it.

This Page Has Been Wandalised!