From RationalWiki
Jump to: navigation, search
Not to be confused with the Daily Mail, though given the content, may as well be interchangeable

The Daily Bale (short for Britons Against Left-Wing Extremism, its original title; it also refers to itself as simply Bale) is an online outfit owned and edited by Joshua Bonehill-Paine, which has at various times operated a blog, a Facebook page, and a Twitter account; these are prone to being shut down and then restarting under slightly different names. Its primary activity is posting completely fabricated stories about right-wingers being cruelly persecuted by left-wing activists, particularly Hope not Hate, as with many other "journalistic" sites with "Daily" in their name.

Given the ludicrous nature of the claims made by the group, it is unclear whether Bale is making a genuine — if singularly incompetent — attempt to smear critics of the English Defence League, or whether it is some kind of parody that got out of hand.

The articles on the blog are occasionally credited; the names of the alleged authors include Terrance Barlington,[1] Ajax Somerton,[2] Steven Sodholmy[3] and "NH".[4] However, as the blog has shown a definite fondness for inventing fictional people, this should be taken with a grain of salt. All the names are most likely Joshua Bonehill.

Members of the group "Still Laughing at UKIP" managed to infiltrate Bale's Facebook page, and revealed that the administrators are Joshua Bonehill, Justin Fulkirk, Dave Peters, Theodore Pimpleton and Wendy Wentlock.[5] Bonehill has a history of creating false evidence to smear anti-fascist groups,[6] and has been fingered as the "brains" behind the Daily Bale.[7]

A screenshot was tweeted late on the morning of 16/01/2014 by @EDLNewsXtra which appears to be a confession by Joshua Bonehill to being either involved, or behind Bale.[8] Indeed, on the same public Facebook page, he now claims to be the 'CEO and Founder' of Bale. In a later blog post entitled "My Struggle", he outlined an incident that led to the founding of the Daily Bale: "The final straw really came when at 1am in the morning I heard a large crash on my front door and heard somebody shout 'Nazi Racist' before stuffing a McDonald’s banana milkshake through my letter box."[9]

More recently the Daily Bale has a page admitting Joshua Bonehill is behind the site. 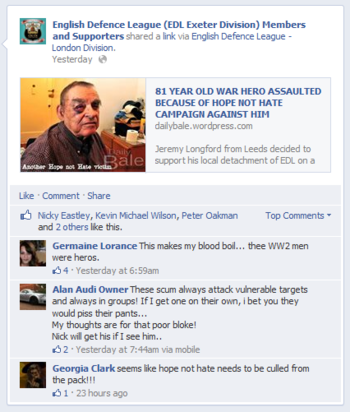 Various EDL-affiliated Facebook groups have reposted the false claims made by Bale; note the violent language used to describe Lowles and Hope not Hate in this example. The man in the photo, incidentally, is actually Jose Rodriguez, a Bronx resident who was attacked by a mugger in 2011.

Bale appears to have been responsible for a story that went viral across the far-right British blogosphere in 2013, about an EDL member named John Green who "was made the victim of an ongoing smear campaign by the left wing extremist blog, Hope Not hate" and committed suicide after losing his job. However the HnH website makes no mention of an EDL supporter named John Green, and the photo used to illustrate the story actually shows Andrew Bunby — a man who went missing in 2007.[10]

Shortly after this incident, Bale published a story about an anonymous EDL supporter, who turned to self-harm after she was exposed by HnH and the website EDLNews. This account was accompanied by a photograph of a scarred forearm, with the caption "Another Hope not Hate victim".[11] However, this photograph was lifted from Wikimedia Commons, where it had been uploaded in 2006.[12]

These two stories are just the tip of the Bale iceberg. Bale had previously reported that an 81-year-old war veteran and EDL supporter, Jeremy Longford, was attacked by a left-wing mob.[13] Mr. Longford is just another fictional character, however: the picture used in the article shows an American victim of assault, Jose Rodriguez.[14] Likewise, the story about a man called George Banbridge, allegedly refused service at Burger King for being a British soldier,[1] was made up — the individual in the photo is one Captain Jeremy Hann.[15] A later incarnation of the blog continued this tradition, posting a photograph of an elderly assault victim and claiming that he was a Bolton army veteran attacked by a Unite Against Fascism member[16] when, in fact, the man in the photograph is a New Zealander.[17]

Other posts on the site have mixed fact with fiction. One such article is about the paedophile activist Tom O'Carroll; O'Carroll is definitely a real person, but Bale claims — without providing any actual evidence — that he is connected to Hope not Hate, and that the group's frontman Nick Lowles is also a paedophile:

Evidence handed to BALE suggests that Evil nonce, Tim O'Carroll has been donating part of his vast fortune to Left wing Political Blog, Hope not hate.

Over a five year period, this vile nonce has donated in the excess of £50,000 which goes directly to fellow child abuser, Nick Lowles.

The Daily Bale asked Mr. O'Carroll about his donation to Hope not Hate and how he feels about the operation:

"I have been donating to Hope not Hate for several years because the organization purveys my idea of political ideology. Although my views are controversial, I feel that Hope not Hate helps bring together fellow Peds."

"Nick Lowles is a personal friend of mine and has the right views about how the world should be. His status as a convicted paedophile is quite frankly appalling as paedophilia should be legal and I feel we can lobby the government to make this happen through Hope not hate"[2]

Indeed, unsubstantiated accusations of paedophilia are a recurring theme across Bale.[18][19]

While Hope not Hate is the main target of the group, it also has a byline in attacking certain members of UKIP, using similar tactics.[20] In addition, the blog has an unsavoury obsession with smearing people who have Down's Syndrome.[21][22]

One lie from Bale which had repercussions involved the Globe pub in Leicester. Bale ran a faked story claiming that the Globe was barring any British army personnel so as not to offend immigrant customers; the story was linked to by an admin at the official English Defence League Facebook page, before being removed and subsequently reposted by a different admin. The staff of the pub were reportedly treated with aggression and abusive phone calls from people who believed Bale's lie, and the Globe even had to close down temporarily. The EDL admin later deleted the link and apologised to the Globe.[23][24][25]

Bale was charged with malicious communications and, in March 2014, pled guilty in court to lying about the Globe.[26] In a subsequent interview with BBC Asian Network, he attempted to defend himself:

I was tipped off that somebody working at the Globe pub had been directly responsible for the main article which described me as being far-right. Through the Daily Bale I created this malicious article which targeted the Globe pub. It was false, and it was slanderous, but I was using the same tactics that had been used against me.

To swallow this argument, you would have to see no distinction between using a subjective term such as "far-right" and making the demonstrably false statement that a particular pub is not serving military personnel.

The Daily Bale was responsible a campaign against a woman named Nikki Pilkington; Pilkington has speculated that this is because her step-sister Maggie Chapman had been involved in a dispute with Joshua Bonehill, the likely owner of the Daily Bale.

The blog ran a story claiming that Pilkington had stolen from the grave of Lee Rigby — despite the fact that she lives over two hundred miles from where Rigby is buried. Predictably, this resulted in Pilkington being harassed by people gullible enough to believe the Daily Bale. "You should be hung along with the twats that murdered Lee Rigby", said Lacey Adams; "deffo smash her back doors in with a dead mans dick", posted Kevin Turner.

The blog then ran a bogus story on Pilkington's daughter, claiming that she decapitated a cat for fun. Bizarrely, this was accompanied by a picture of her which had been Photoshopped to make it look as though she suffered from a facial deformity.[27][28]

In one particularly bizarre article, Bale reported the statistic that 275,000 Britons disappear each year, and theorized that they are being kidnapped by left-wingers:

So where are these people actually going? Most likely towards the left-wing's sickening satanic rituals or for the use of scientific research as they are so opposed to the use of animals.

Have you ever seen the film Hostel? I should imagine these good British people are being transported into Ukraine somewhere and are being used for sickening left wing blood sport and murdering.

One valid point that we will make though, since Britain joined the E.U, the number of missing people has been on the rise. Surely it's a coincidence you say? Probably not, something odd is going on.[4]

Later on, the blog ran a story entitled "White Man attacked by feral cats". This was copy-pasted from a report about a French woman of unspecified ethnicity being attacked by cats; Bale simply altered the victim's identity to that of a white male and added the tag "Racist cat attack".[29][30] Other curious reports from Bale include the claim that Princess Diana was killed by communists.[3]

People who believe this rubbish[edit]

Quite a few nationalists have eagerly swallowed Bale's lies. Here are just a few examples of those poor, gullible souls...