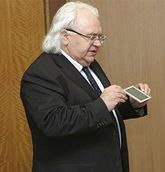 Viktor Ivanovich Petrik is an "inventor" (not) and an "academician" (as if) of the so-called Russian Academy of Natural Sciences, which is a fairly strange name for that organization to have, because the only accurate part is "Russian".

Petrik was largely insignificant on the field of Russian science until the "wild nineties".[1] Born in Ukraine, he obtained a degree in psychology from the Leningrad State University, and tried and failed to also obtain a degree in physics. In 1984 he was imprisoned for 11 years for attempted robbery, fraud, and eleven more articles of the Soviet criminal code.[2][3] Then Petrik was prematurely freed in 1989 and all details about his criminal record mysteriously vanished from the archives.

Then in the early 1990s, Petrik became one of the many new-wave entrepreneurs who exploited failing state businesses by cheaply buying their assets for their own commerce. Petrik plundered the State Optical Institute that way, using its former equipment and scientists to grow artificial gemstones for jewelry. During that period, he also made connections with future leaders of the United Russia party, Vladimir Putin and Boris Gryzlov.

In 1997, Petrik joined the Russian Academy of Natural Sciences (RAEN), which was founded in 1990 and is known primarily for being a haven for pseudoscience promoters opposed to the legitimate Russian Academy of Sciences, or RAN (which they call, surprise surprise, the "scientific establishment"). While the RAEN has genuine scientists in it, its low standards of recruitment and publication made it an ideal organization for believers in ESP, astral woo, homeopathy, and too many crank theories to count.

The purification business did not even begin with water. In 2007, Petrik listed Gryzlov as a co-inventor in their patent for a radioactive waste purifier. Experiments made by Eduard Kruglyakov, the leader of the RAN committee for fighting pseudoscience, found that the effectiveness of the device were far from claimed. This didn't stop Petrik from completely ignoring the data and claiming unrealistically high figures.

Petrik's connections with Gryzlov were instrumental in securing government funding for his company, Gold Formula, which produces carbon-based water filters, for a national project for water purification. Petrik, in return for assistance in what was in effect budget theft, was generous on compliments, calling Gryzlov "a brilliant scientist".[4] At first, in 2007, Petrik's filters were installed in a limited number of social organizations in the Novgorod Oblast, and then in 2009, Gold Formula won a rigged contest for government funds. Petrik's work was approved, with much fanfare, by a delegation of scientists from the Institute of Common and Non-Organic Chemistry of the RAN. There is a suspicion that the event in Petrik's support was a result of Gryzlov personally asking the RAN president to interfere.

The resulting shitstorm among fellow scientists blew into a scandal nicknamed "Petrikgate" that raged from 2009 to 2010, essentially a battle between Petrik and Gryzlov versus the pseudoscience committee and consumer rights organizations. The latter became involved when it turned out, in the meantime, that the filters were not only ineffective at filtering the water, but actually made it more dangerous to drink. Whoops.

In response, Gryzlov said that the committee has no right to dictate what is science and what is pseudoscience, in other words, to fulfill its sole function. Wut?

There exist those forces now that do not want the RF[5] to become a power that has high technologies, into a country that implements our president's plan for modernization, and these forces cut short the development of new ideas.[6] […] Therefore, specific scientists cannot pretend to be the ultimate authority in truth. […] The word pseudoscience dates far back to the Middle Ages. We can remember Copernicus, who was burned for saying 'And yet, the Earth moves.' —Boris Gryzlov, ever the expert on history of science; interview for March 19, 2010

In March-April 2010, Petrik got the dubious honor of having a special committee in the RAN formed just for him, which included Kruglyakov of that very pseudoscience committee, plus 13 more RAN members, gathered specifically to investigate what was dubbed "the Petrik-Gryzlov problem". Eventually, on April 21, committee leader Vladimir Tartakovsky published a resolution that, unsurprisingly, confirmed that Petrik's filters were worse than nothing, and furthermore that patents filed by Petrik demonstrated his scientific incompetence.

Petrik responded by claiming that the academicians opposing him "were motivated to do so by a reward promised by representatives of the USA". While he, presumably, acted this whole time as an uninterested party only concerned about pure science with no political or financial support at all.

Petrik allegedly invented the formula of guaranteed winning in casino play, an engine that powers vehicles without any kind of energy source, and an eternally spinning cylinder.

In October 2010, he protested against the awarding of the Nobel Prize in Physics to Andre Geim and Konstantin Novoselov, claiming to have discovered graphene before them. Among other things, he misunderstood the nature of the research in question (they were not the first to synthesize graphene, but they discovered new properties of it), and waved two planks in front of journalists that he claimed were made from graphene, proving he did not understand what graphene is.[7]

The website of Petrik's water filter company, Gold Formula, also contains information on his other research, which somehow manages to make even less sense than his filter escapades. These contain articles about such things as water memory and homeopathy, the golden ratio and pyramids (including, obviously, Khufu's pyramid), and energy woo. That last one is down[8] for reconstruction… Did the scientist conspiracy silence the brilliant inventor after all?

Nice to see tax rubles at work! Well, not anymore, at least. In late 2010, United Russia apparently saw Petrik as too much of a crank even by their standards, and Duma member Vladimir Medinsky recommended the party to distance itself from the "inventor" and equated him to Lord Voldemort, AKA "He-Who-Must-Not-Be-Named", for damaging the party's image by association. His company has been excluded from the government pure water program, but continues to exist and lobby the support of city administrations — this time in Ukraine…