It even has a centerfold!

The Voynich Manuscript is a text generally assumed to have been written in the first half of the 15th century, in a seemingly unknown and curiously repetitive language. Despite the language's statistical similarity to real, known languages, the text has so far defied all attempts at translation or deciphering. The drawings and mathematical figures add an air of intrigue, and the work is often assumed to be some form of religious or pseudo-religious mystical text. Consequently, it has attracted some attention from the wingnut theorists.

The manuscript and its "language"[edit] 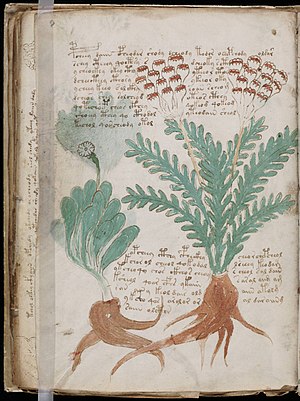 The text is 240 pages (though there are several missing pages) written on vellum, many pages including intricate illustrations of plant like designs or mathematical figures. The language in the text is currently unreadable. It is either a constructed language, or a cipher. No experts in ciphering or linguistics have given a compelling reason to favor one possibility over the other. If it is a cipher, the most popular theory is that it is a monoalphabetic, letter for letter shift.

Scholars of both cryptography and linguistics have found ample interest in studying the text, even if they feel it is a hoax, simply because the process itself presents many questions that become intrinsic to the very notions of "how do you break a code, or crack a new language?"

The plants illustrated in the text have no connection to any real-world plants (with a few exceptions). The mathematical figures do not seem to correspond to any real-world formula or symbolic principle either.

According to Yale University, the current holders of the manuscript, there are 6 conceptual divisions[1]:

Its modern life began in 1912 when it was acquired by a Polish revolutionary turned Anglo-American antiquarian book dealer, Wilfrid Voynich (husband of Ethel Lilian Voynich, author of The Gadfly, etc.), after whom it is now named.

The managers of the Jesuit Villa Mondragone in Frascati sold the manuscript (and a number of others at the same time) to him to help raise money for repairs to the Villa. The Jesuits, in the best mystery novel tradition, appear to have inherited it from Athanasius Kircher S.J. several centuries earlier. Before Kircher, the cookie trail of clues leads back to the Imperial Court of Rudolf II in Prague before the crumbs finally run out, still 150 years or more after its vellum's radiocarbon date. Nearly everything else about its prior history remains largely speculative.[citation needed]

In the 17th century, early owner Georg Baresch concluded that its author must have "acquired some Egyptian treasures of medicine" from a visit "to the oriental regions"[citation needed]; while in the 20th century Wilfrid Voynich concluded that only Roger Bacon could have been its author, and similarly that John Dee must have carried it to Rudolf II's Court.[citation needed]

Not surprisingly, given that it's filled with star charts, exotic unknown plants, and mathematical formulas no one can correlate with any math known today, the "aliens among us" crowd loves this book,[2] suggesting that it is clear evidence aliens not only have been here, but they've been here recently. The Internet Site Above Top Secret has "conclusive evidence" that no one could know how the universe worked in the 1400's. "Flip the pages" and "that spiral looks just like a galaxy arm"[3] (or you know, the arm of any spiral). "Aliens, or a mad genius?" (Minus the "genius", perhaps?)

The "lower half of the internet" seems quite abuzz that this is an alchemical text from some super-secret brotherhood that coded its findings so no one would have record of them.[4] This is actually a decently rational idea of what the text might be, but not to the extent that it possesses any real alchemy secrets.

In 2011, a Finnish businessman named Veikko Latvala claimed to have read the manuscript, not by conventional cryptographic means, but by divine revelation.[5] He claimed it to be a book of prophecy to which he alone was given the key,[6] which sounds much like another book we've heard of before.

Third-party verification of these hypothesis is still pending, with the usual uncertainty implied.