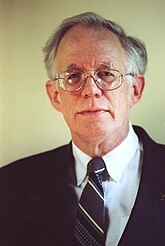 Not your kindly grandfather.

Even their healthcare motivations are 100% hate-driven.

William Luther Pierce (1933–2002) was a key leader in the white supremacy and neo-Nazi movements and a vocal Al-Qaeda supporter.

He is most notorious for writing (under the pseudonym Andrew MacDonald) the white supremacist novel The Turner Diaries.

Pierce, a one-time physics professor at Oregon State University, first got involved in right-wing politics with the John Birch Society in the early '60s. Soon deciding that the Birchers weren't right-wing enough, he started his neo-Nazi career in 1966, working as an associate of George Lincoln Rockwell of the American Nazi Party. He published the ANP's newspaper National Socialist World, and after Rockwell's assassination in 1967 continued as a leader in the organization, which by then had been renamed the National Socialist White People's Party. He joined the far-right National Youth Alliance in 1970, quickly rising to a leadership position and getting himself into a rift with the group's founder Willis Carto, who accused Pierce of using the NYA's mailing list to disseminate letters attacking him.

Leader of the National Alliance[edit]

Eventually, in 1974 Pierce and his followers split from Carto and the NYA to form the National Alliance, one of the most powerful white supremacist groups in the late 20th century. Key to the National Alliance's success was Pierce's autocratic leadership style, which put him in complete control of the group's message and (at least until his death) prevented the leadership disputes that plagued so many other far-right organizations. He realized early on the power of the internet, running internet broadcasts and transcripts of his radio program American Dissident Voices. Also, despite his disdain for rock music and personal affection for classical music, he also saw the propaganda value of the newly-emerging white power rock scene, buying up the neo-Nazi record label Resistance Records in 1999.

In 1985, Pierce moved his organization from Arlington, Virginia to a 346-acre farm in Mill Point, West Virginia, which he called the Cosmotheist Community Church. Cosmotheism is a "religion" invented by Pierce in 1976 that believed that white people were the current apex of evolution, and that only by keeping themselves separate from (and even exterminating) other "races" could white people evolve to a higher level. In reality, the Cosmotheist Community Church was a transparent effort to acquire tax-exempt status for Pierce's organization; unlike many in the American white nationalist movement (who usually profess either Christian Identity or some form of paganism), Pierce was an atheist, having deconverted as a teenager.[2] He had sought tax-exempt status for the National Alliance itself in 1978, on the basis that it was an "educational" organization, but the IRS saw straight through his claims and denied it. In any event, the "church" enjoyed tax exemption for only a year — an IRS investigation in 1986 found that most of the compound was being used to support the National Alliance's activities, and it stripped its tax exemption from all but 60 acres of the property (which were to be reserved for religious use only).

His last years were spent holed up in his "church" in West Virginia, overseeing his multiple print publications, his book publishing firm National Vanguard Books, Resistance Records, and American Dissident Voices. Like most white supremacists, he blamed the media, the government and the Jooz for his own failings, including his inability to get anyone to take his ramblings seriously. Pierce died of cancer on July 23, 2002. His beloved National Alliance started showing signs of terminal illness itself less than two months later due to leadership disputes.

After he kicked the bucket[edit]

Since then, Pierce's esteemed successors have devoted the bulk of their time to collecting child pornography, insulting each other's mothers on the internet[3] and making crappy video games.

Pierce's best-known work, The Turner Diaries, depicted a near-future race war in graphic detail and is thought to have inspired many other white supremacists, including terrorists like Timothy McVeigh and white supremacist gangs such as The Order and the Aryan Republican Army.[4] He also wrote a "more realistic" novel, Hunter, about a serial killer who attacks mixed-race couples, which he dedicated to Joseph Paul Franklin, who had killed precisely for similar reasons. (He's also the guy who claimed to have paralyzed Larry Flynt, after Flynt had included interracial sex in an issue of Hustler.) 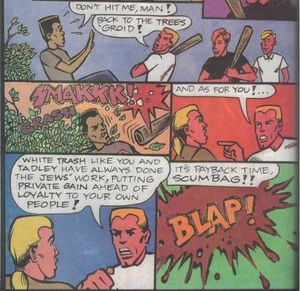 One of Pierce's lesser-known works of fiction is an underground comic from 1993 entitled New World Order Comix: The Saga of White Will. Pierce's script was illustrated by Daniel "Rip" Roush and coloured by (ahem) William White Williams.[5]

As you would expect, the comic is a white supremacist version of a Jack Chick tract. It takes place in a similar alternate universe, in which almost everybody is either a) a wingnut who agrees entirely with the author; b) a card-carrying member of a sinister left-wing conspiracy; or c) an ill-informed fence-sitter who initially sides with b but defects to a after hearing a few choice soundbites.

The action begins in what is apparently meant to be a typical American high school, where white kids are routinely beaten up by black classmates, politically incorrect books have been purged from the library and pupils are forced to follow an Afrocentric curriculum which claims that Beethoven was black.

The school appears to have done a terrible job of indoctrinating its students, however, and contains a surprisingly large number of white supremacist teenagers. White Will and his Nazi buddies are guided by an all-knowing patriarch (the equivalent of that guy in the eyepatch from the Chick tracts) who tells them that modern schools "want to kill all white pride and sense of identity. They want all whites to become wiggers!" A helpful footnote explains that wiggers are "white niggers". The protagonists are opposed by a Jewish student ("Izzy Rabinowitz, valiant son of Israel") but they win the support of Leroy X, a militant black Muslim who shares their belief in racial segregation. Eventually, they succeed in sabotaging an anti-racist rally, and their pipe-smoking mentor pats them on the back for their efforts: "Izzy and his kind may seem to have the upper hand now through their money and control of the media, but their time is running out! A new day is dawning for nationalism and racial and ethnic self-determination everywhere" he comments. Did Pierce and his associates actually talk like that, one wonders?

New World Order Comix was billed as the first issue in a series, but does not appear to have been continued. Presumably the second issue would have seen several of White Will's friends grow dissatisfied with his leadership and form their own splinter group, resulting in the school's white nationalists collapsing into total obscurity following long, drawn-out sessions of in-fighting.

The very idea of pro-Nazi comic books is ironic, especially when one considers that fact that comic books were declared "Entartete Kunst" (degenerate art) and banned in Nazi Germany under the "Smut and Trash" decree of 4 February 1933.[note 1]

Due to the "my enemy's enemy" dynamic, neo-Nazis can find like-minded people in the most unlikely places. Pierce was no exception: