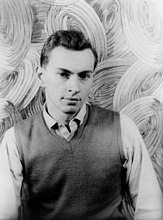 Gore Vidal (October 3, 1925–July 31, 2012) was an American author, public intellectual, and atheist. Vidal's life can be divided into several episodes, serving as an evolutionary model of how an intellect can be all so correct at one point and absolutely, egregiously wrong at others. The Dan Savage of his day — a clever, opinionated, bisexual "gentleman-bitch," as he called himself — he had a superb talent for making enemies everywhere he went, and his name is mud in literary circles.

Vidal was open about how he hated his mother and only really felt happy as a child when he read documents to his blind grandfather, Senator Thomas Gore (D-OK). By World War II, he knew he was bisexual, though he resented any adjective of his sexuality and refused to call himself gay his entire life, despite having a live-in lover for several decades. He once famously replied "I was too polite to ask" when a reporter inquired whether he lost his virginity to a man or woman. He often said the great love of his life, a man called Jimmy Trimble, was killed in the Asian Theater, and his first novel, The City and the Pillar, was secretly dedicated to him.

He was raised conservative but soon found himself out of step with the "joyfully neo-fascist"[1] culture of the U.S. right, shifting from Tory to Whig to outright social democrat in a thirty-year span.

With the election of JFK, Vidal found himself the step-brother of the First Lady (his father, Jackie O's mother, you figure it out). This elevated him into the Beltway gossip circle, which he loved viciously. But a feud with Bobby sent Gore on a downward trajectory in Washington, so he left politics to write more, though he continued to cover Republican National Conventions with the morbid curiosity of a zoologist. He continued to publish essays and give lectures on persistent cultural taboos—sex, prohibitions of drugs, crime woo, and bigotry—in a sharper and more forthright manner than his ofttimes supercilious interviews and books.

While tolerant of realpolitik, Gore was irritated by rhetoric of the American exceptionalist sort.[2]

In 1998, Vidal reaffirmed his reputation for tactlessness and balls of titanium. He did it by publicly engaging in correspondence with convicted Oklahoma City bomber Timothy McVeigh. Vidal later wrote a Vanity Fair article entitled "The Meaning of Timothy McVeigh," which, if not humanizing the mass murderer, sought to understand his reasoning for the killings and the threat of future "blowback" for U.S. policies.

The McVeigh affair was immortalized in a stage play suggesting a budding romance between the two pen pals (to Vidal's consternation).[3] The irony seems to have been lost.

Take in the words of VDARE's favorite intellectual,[4] Gore Vidal, at his most quotable:

A characteristic of our present chaos is the dramatic migration of tribes. They are on the move from east to west, from south to north. Liberal tradition requires that borders must always be open to those in search of safety, or even the pursuit of happiness. But now, with so many millions of people on the move, even the great-hearted are becoming edgy. Norway is large enough and empty enough to take in 40 to 50 million homeless Bengalis. If the Norwegians say that, all in all, they would rather not take them in, is this to be considered racism? I think not. It is simply self-preservation, the first law of species.[5]

The text of that speech is an excerpt from one of Vidal's favorite essays[6] on overpopulation and free trade. The rest of the speech is unavailable (assuming that it ever took place). This quote is bandied around the internet, euroskeptic forums mainly. Meanwhile, in reality, Vidal spoke positively of the European project and the decline of the nation-state.[7]

Getting old usually is not fun, but Vidal made it look plain miserable. In his last years, he became hampered by a bad knee, forcing him into something of a Recluse Mode. Furthermore, many would say he took a dive into the land of moonbats when he began hooting and hollering about some conspiracy regarding 9/11,[8] though his contention was not that the gummint organized the attacks but rather went "out to lunch," sat back and let it happen. His politics began to be more and more reminiscent of pre-war isolationism (not unlike those of his grandfather). This became evident as he started coming off as a relic of the America First crowd by spouting conspiracy theories about FDR and Pearl Harbor.[9] Perhaps strangest of all, he accused the Jews of conspiring to give him a bad book review.[10] Ultimately, he will be remembered for a great set of books and a bizarre set of conspiracy theories.

Though he personally liked JFK, Gore did not shy away from criticizing what he regarded as a disastrous presidency. He also held many heated opinions regarding Bobby Kennedy (lying opportunist) and his cousin Al Gore (flaky careerist). Needless to say, meetings at the annual Gore family barbecues were few.

Sadly for a man who aspired to political office, he died confident that the American republic was beyond saving.[11]

Gore Vidal is referenced in three episodes of The Simpsons, most notably, in "Summer of 4 Ft. 2" when Lisa regards Gore (or, at least, his books) as one of her only friends. She describes him as a grown up nerd, who still had kissed more boys than she ever will.[12]

Gore Vidal was also well known by regular folk for his role as the patrician character "Director Josef" in the sci-fi movie Gattaca.[13]