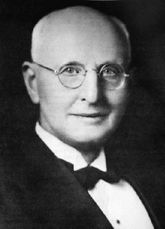 "And now, young Skywalker… you will die."

Weston A. Price (Born Weston Andrew Valleau Price)[1] (Newburgh, Ontario September 6, 1870–Santa Monica, CA January 23, 1948) was a prominent dentist known primarily for his theories on the relationship between nutrition, dental health, and physical health. He founded the Research Institute of the National Dental Association, which later became the Research Section of the American Dental Association, and served as its chair from 1914-1928.[2][3][4] He is practically the patron saint of crank dentistry.

Noted in the dental profession for his work in the relationship between X-rays and cancer, the invention and improvement of a pyrometer dental furnace, and the development of radiological techniques expanded on in the 1940s,[1][5][6][7][8] Price has been brought to the general public's attention by anti-root canal, anti-fluoride, and paleo-diet supporters basing their ideas on two of his works: Dental Infections, Oral and Systemic (1923) and Nutrition and Physical Degeneration: A Comparison of Primitive and Modern Diets and Their Effects (1939).

Dental Infections, Oral and Systemic was Price's research supporting the then-prevalent concept of oral focal infection theory which had already led to extractions, rather than endodontic therapy being the predominant method in dentistry. However, research in the 1930s raised questions about the quality of this and similar evidence and, despite a cautious resurgence in interest in oral FIT, there is still no scientific evidence for it working to the degree supported by Price and his contemporaries.[9]

Nutrition and Physical Degeneration: A Comparison of Primitive and Modern Diets and Their Effects detailed his global travels studying the diets and nutrition of various cultures, coming to the conclusion that so-called Western diet was the cause of many diseases.

While notable during his lifetime and for a few years afterward, aside from the occasional note in dental textbooks regarding his research into the relationship between x-ray and cancer, invention and improvement of a pyrometer dental furnace, the development of radiological techniques expanded on in the 1940s, and the formation of the Weston A. Price Memorial Foundation in 1952 (not to be confused with the Weston A. Price Foundation), Weston Price was virtually unknown in both dental and average public circles, with his work on focal infection and nutrition being barely mentioned.

That all changed in 1994 when George E. Meinig published Root Canal Cover-up Exposed, reviving Price's 1923 Dental Infections, Oral and Systemic and pushing a man who before had warranted little more than a paragraph in dentistry textbooks into the limelight. It wasn't long before the anti-root canal and later paleo-diet crowds turned Price from the mainstream-for-his-time DDS he was into crusader whose work had been suppressed by the "establishment." The reality was, of course, quite different, but sadly the skeptics didn't point this out, helping to feed the suppression claims.

Unlike Price's Dental Infections, Oral and Systemic, Meinig's had no professional editor, made unsubstantiated claims, confused basic terms (such as infection and inflammation), and expanded into areas far outside the scope of Price's original work to the the point that a reviewer stated "I wonder how the serious researcher Weston Price would have reacted to the way his work has been presented."[10]

Unfortunately, critics of the anti-root canal movement have used Meinig's version of Price's work as the basis of their criticism rather than going back to Price himself, which is ironic as Price makes comments that could be easily used to challenge those who currently use his 1923 work.

Price conservative for his time regarding tooth extraction[edit]

Contrary to the picture both the anti-root canal movement and its critics paint, Price was never enthusiastic about tooth extraction:[11]

Some 12 years later the author of an article in the Journal of the Canadian Dental Association would cite part of this passage as an example of "the authorities that emphasize my contentions for conservatism" even though it came from the "radical" Price.[12]

The critics of the anti-root canal movement like to point out that causation does not imply correlation, seemingly ignorant of the fact Price himself stated:[13]

However, the biggest mistake of critics of the anti-root canal movement is missing this one passing comment Price made about his 1923 work in his 1939 Nutrition and Physical Degeneration:

Here, right from the very man that the anti-root canal movement has made their golden boy, is the admission that not only couldn't he find evidence of focal infection being the cause of systemic disease but that the actual cause was due to something else and that he needed groups as physically perfect as possible to test this new hypothesis.

A Product of its Time[edit]

However, both sides of the paleo-diet debate have missed an obvious problem with Price's work: the fortification of food. When Price printed his book in 1939 only vitamin D (1927) and vitamin C (1934) existed in synthetic form to be put into food and it wasn't until 1941 when the FDA actually came up with guidelines for fortifying flour.[17] This means that Price largely studied the consumption of unfortified modern food. But today, most processed food is fortified so there is a clear disconnect between the processed "modern" food Price studied and our processed modern food.

Another issue both sides of the paleo-diet debate have missed is that once one looks at the literature one realizes that while there had been earlier studies (such as May Mellanby's 1924 "The Effect of Diet on the Development and extension of caries in the the teeth of children"[18]) the early 1930s was when research into the relationship between tooth decay and nutrition really kicked into high gear. However, as a 1933 paper reveals this was largely unexplored territory with each researcher (including Price himself) promoting a different nutrient.[19] In fact, there were papers coming out as recently as a year before Price published his book on the matter.[20][21] So as with Focal Infection Theory in the 1920s, Price was neither a pioneer nor a lone maverick fighting the establishment but rather mainstream for his time.

This brings us to the elephant in the room both sides of the paleo-diet debate seems to want to ignore like the plague: Price's work was a product of his time not ours. The understanding of medicine in general and nutrition in particular has changed a lot since 1939 and any use of what Price did must take that into consideration.

The real lessons of Price[edit]

Stripped of all the woo added by Meinig and others, Price's work still has meaning for today's world.

These are the real lessons of Price's work.