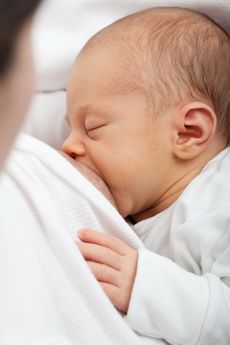 Breastfeeding is part of the wondrous, natural, healing, nurturing world of mother Earth exclusive to the God-blessed humans and other inferior mammals. If you don't exert your God-given responsibility to breastfeed your baby, you are an evil child-abusing devil monster. However if you do breast feed in public, you are a pervert creating trouble-maker.

In reality, breast feeding is mostly a very positive thing which is simply mothers lactating and babies drinking milk from their mother. It is a praiseworthy practice but not obligatory. In some very specific cases for medical or psychological reasons it is not advised to breastfeed and shaming mothers who don't is a pretty bad way to deal with the issue.

Breastfeeding is almost always a good idea when possible, though formula feeding is better than giving contaminated milk to babies.

The benefits of breastfeeding are well established and for the most part it is rather beneficial for children to drink their mother's milk. Thanks to the history of natural selection, babies are known to instinctively crawl and reach for their mother's breasts if laid on the mother's stomach after birth. One of the most commonly cited benefits of breastfeeding is that it helps connect mothers and their children; the baby feels its mother's body warmth and heartbeat (reminiscent of the womb it has left) and can become familiar with its mother's smell. Studies have shown that babies who are breastfed are more likely to reach adulthood.[1]

There have been more demonstrated benefits due to breastfeeding for the mother (though literature often focuses on the benefits for the child, of which few have been empirically proven). Mothers who breastfeed are less likely to develop certain forms of cancer and diabetes,[2] and it makes post-partum problems and complications less likely and makes part of the post-partum recovery process easier.

One long-term study on about 3500 subjects showed on average a significantly higher IQ score (3.76 points) and length of education (almost a year) at the age of 30 for those who had been breastfed for more than twelve months compared to those with less than one month, whereas confounders have been accounted for. The monthly income showed also higher, though this is attributed mostly to the higher IQ score.[3]

The breastmilk may contain certain substances that the mother ingests; in certain quantities these may harm the child. For instance caffeine, alcohol and mercury are known to pass through. Likewise, certain medication or illnesses of the mother can harm the child through the breastmilk. It is recommended mothers seek medical advice in these cases before they breastfeed.

For HIV-positive mothers there is conflicting indications as to how dangerous breastfeeding may be to their child. In general it is recommended to use alternative breastfeeding or formula, if they can be used.

Breastmilk that is purchased over the internet may contain high levels of microbial contamination, reflecting "poor collection, storage, or shipping practices", and putting the exposed infants at risk.[4] Another study by the same authors found that 10% of internet breastmilk was contaminated with cows' milk.[5]

Not to be confused with slacktivism.

"Lactivism" is an apparent portmanteau of "lactate" and "activism" used to describe the (often sensible) advocacy of breastfeeding in contrast to bottle feeding. Its main focus is on promoting the health benefits associated with breast milk and with attempting to counteract discrimination nursing mothers can face at work. Pretty much every medical organisation, doctor, and nurse on the face of the planet agrees with the old axiom "breast is best."[6] Studies prove that breast milk offers immunological and other benefits which cannot be found in infant formula.[6] However, more doctrinaire breast-feeding advocates imbue this simple biological process with a quasi-religious significance, and then use this to make mothers who can't (or, Heaven forbid, won't) breast-feed feel like child abusers.

Studies, including one long term study on siblings by Cynthia G. Colen and David M. Ramey, have concluded that the supposed 'benefits' of breastfeeding may be primarily due to selection pressures into infant feeding practices along key demographic characteristics such as race and socioeconomic status.[9]

Dr. David Meyers, the director of the U.S. Agency for Healthcare Research and Quality pointed out that six women would have to breastfeed exclusively for six months to prevent *one* ear infection. [10]

A notable meta study stated that "There was no relationship between breastfeeding in term infants and cognitive performance."[11]

There have been some instances of truly absurd, upsetting and in some cases dangerous lactivist harassment. The classic example is that of Emily Wax-Thibodeaux, a breast cancer survivor who had to have a thorough double mastectomy. When she told the lactation consultants that she was physically incapable of lactating, they suggested she try to produce milk through her armpits.[12]

Tara Blanchard related how she was on an anti tumour medication which completely suppressed prolactin, which is essential for producing breast milk. Again, she was bullied, painfully physically handled and pressured to produce milk that she was physically incapable of producing.[13]

Another woman reported how, when her baby was jaundiced and screaming, nurses still refused to provide formula - rather than leave the baby to starve, the parents resorted to smuggling it in.[14]

Author Courtney Jung, who wrote Lactivism:How Feminists and Fundamentalists, Hippies and Yuppies, and Physicians and Politicians Made Breastfeeding Big Business and Bad Policy, also pointed out:[15]

“Not one of the breast-feeding initiatives launched since 1995 seems directed toward supporting women’s own preferences and choices.”

At the more extreme ends, lactivism and the mania for breastfeeding can kill. Florence Leung killed herself during an episode of postpartum depression which her husband says was exacerbated by the pressure to breastfeed.[16] Babies have died from malnutrition because their mothers did not know that their breastmilk was insufficient.[17] Mothers in Africa with HIV have been pressured to breastfeed, even though breastfeeding could transmit the virus to their babies, and between 4.9 - 7.35 million babies have been infected as a direct result of breastfeeding.[18]

Breastfeeding shaming is a two-sided problem. On the one hand some mothers are made to feel inadequate by the "all natural super moms" if they choose not to breastfeed or cannot do so. After all, no synthetic substance can improve on God's perfect natural design.[19] The argument goes that such mothers are selfish, anti-mother-nature or are even unfit to raise their children. While encouraging mothers to breastfeed is admirable, before you go overboard and start insisting or shaming those who don't, you should keep in mind that there are many reasons some women cannot breastfeed or choose not to. These include: serious discomfort or even pain, a sense of alienation from others and issues involving bodily autonomy.

On the other hand, some women are shamed into not breastfeeding in public. While laws have changed in many countries to allow mothers to openly breastfeed almost anywhere, some conservative men[Who?] have thrown all sorts of moronic arguments against it. According to them and other arguments from the depths of lunacy, women who openly breastfeed are sluts who wish to frustrate other men, they care more about their tender nipples than social decency, and exposing their breasts will turn children who witness this into perverts. Never mind that most breastfeeding mothers cover themselves modestly while giving junior a meal.

Rush Limbaugh opposes breastfeeding,[20] though likely not out of informed decision-making, but as a knee-jerk to Michelle Obama's Health Forums, or perhaps as a way to curry favor with patriarchal conservatives who freak out at the idea of a woman's breast being exposed to view. Juicy speculation has also revolved around Freudian and Oedipal explanations.

Historically (and still in parts of the developing world) substitute breastfeeders (wetnurses) were used to nurse children. These days, it is uncommon and some[Who?] claim that the only milk a baby should take is that of their own mother. It has not been demonstrated that taking the milk of one's own mother is likely to create a stronger bond between mother and child nor are any of the benefits shown to be more effective when the milk ingested is from the baby's biological mother.[citation needed] Some mothers and woo-meisters claim that babies should be directly nursed and that many of the benefits of breast milk are lost when pumps are used and breast milk has been stored. After all, breastfeeding is essential for bio-psycho-spiritual-health.[21] This has not been substantiated by research.[citation NOT needed]