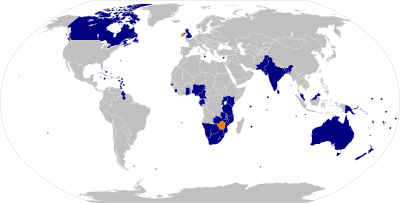 The White Commonwealth, sometimes the Old Commonwealth, is an expression referring to those members of the British Commonwealth who are substantially white[1] and mainly English speaking.[note 1] Traditionally, the white populations of these countries were linked to the UK through numerous family ties, but subsequent immigration and the march of generations have weakened these ties. In addition, Americanisation of all these areas and UK involvement in the EU have undermined British cultural hegemony, and economic ties.

Unlike some other parts of the Commonwealth (or the USA), their transition to independence was gradual and non-violent.

The White Commonwealth is generally considered to include the following:

These four states have considerable economic and military clout. Australia and New Zealand are the only real powers in the South Pacific region.

The white commonwealth is also sometimes referred to as the ABCs - Australia, Britain and Canada - which name excludes NZ, the fourth and smallest of the main players.

South Africa (including Namibia, or South-West Africa as it was called when controlled by South Africa) and Zimbabwe (ex-Rhodesia) are/were sometimes included, because of their substantial white population, however they are now largely excluded following the end of white minority rule and Apartheid.

The following are also presumably in the White Commonwealth, but are actually a bit small:

Bits excluded from the White Commonwealth on grounds of not being white enough:

Former British/English colonies, protectorates and mandates that aren't in the Commonwealth, or the White Commonwealth, and don't want to be in either[edit]

Countries that are in the Commonwealth for no discernible reason[edit]

A frequent complaint of Third World commonwealth members is that it is a two tier organisation, and that the majority black member states are treated as second class.[2] This construct gives us an easy handle with which to talk about that issue.

The resentment seems to be widespread - the following quote is from a Ugandan source discussing Zimbabwe, and mentioning Fiji and Nigeria: