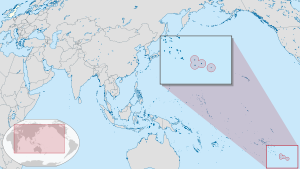 Easy to find on any world map with a little patience and a powerful magnifying glass.

The flag of the Pitcairn Islands.

The Pitcairn Islands are a set of four islands in the middle of nowhere, or more specifically, the Pacific Ocean. The main island (Pitcairn) is the only one that is inhabited by humans, and as of 2014 there were only 49 Pitcairners[2], and in 2019 there were only 50 of them there.[3]

Pitcairn's remoteness is enhanced by only being accessible by sea and by only having one small dock that is only accessible by small boats. It's also expensive to get to since the low numbers of people who want to visit give the boats that do go there monopoly power. The main ship, the Claymore II, only goes to Pitcairn every 3 months, costs NZ$5000 and leaves from Mangareva, Gambier Islands, French Polynesia.[4][5] To get there you need to take a once a week flight from Tahiti.[6]

The islands were settled by 9 mutineers of the HMS Bounty

and 18 Polynesians the crew of the Bounty had brought along as slaves with the intention of helping establish a community at the ship's original destination of Tahiti: 6 men (of whom 3 were stowaways), 11 women, and 1 baby girl named "Sully".[7] Of course, the white mutineers and their partners established property of their own, while the Polynesians were allowed none. (Goatdamn.) Things gradually devolved over the next few years following landfall, with the white and Polynesian men murdering each other, naturally over a saga of mindless generic relationship drama involving the Polynesian women following the deaths of the white men's partners due to natural causes.[7] (Goatdamn.) As you can probably guess, there was quite a bit of inbreeding due to the small founding population- all of whose descendants must by now be the cousins, aunts, and uncles of not only each other, but also of themselves. (Goatdamn.)

As a British Overseas Territory, the Pitcairn Islands are the only reason that the sun cannot set on today's British Empire, which is now a mere shadow of what it was in its glory days.[8]

Another consequence of being tied to the British Empire is that the Pitcairn Islands have a legal system which is absurdly out of proportion to their size. There is a Magistrates Court, which operates on Pitcairn, but above that there is a Supreme Court and a Court of Appeal, both of which operate in New Zealand, and appeals from the Court of Appeal may be made to the Privy Council, in England.

This was all theoretical until the 2000s, when it was discovered that a significant proportion of the population had committed sexual assault, and it was necessary to put them on trial. If there was ever anywhere that the term rape culture could be applied to, it would have been Pitcairn around this time;[note 1] girls as young as ten were routinely raped,[9] while the women, who were themselves victims, repeatedly looked the other way while this was going on.[10] More than half of the men living in Pitcairn Island have been convicted of sex crimes.[11] The trial cost the United Kingdom millions of pounds and the result was appealed through every level of the court structure, leaving the government to deal with arguments such as "You can't get me, the Pitcairn Islands seceded from the British Empire!" and "You never gave me a copy of the law. How was I to know that sexual assault was illegal?".[12] These arguments were all rejected.

Despite its obscenely tiny population, the Pitcairn Islands are one of the only South Pacific jurisdictions to have a freedom of information law.[13] You don't have to have any connection to Pitcairn to make a FOI request, so if there's ever anything that you want to know about this small island, then this is a great way to find out.

As for democracy, there is an "Island Council" elected by the islanders, but this only has an advisory role, and all laws must be approved by the governor, who doesn't actually live on the island, but to his credit does visit sometimes.

In 2016, the Island Council considered a request to adopt a "virtual currency" for Pitcairn, only to be told that the British Government would not let them do it.[14]

The Pitcairn Islands are actively encouraging immigration, due to concerns over its low population. If you ever want to move to another part of the world, then Pitcairn is probably the easiest place to get permission to move, if you don't mind living in the middle of nowhere among convicted sex offenders, such as the mayor, Shawn Christian.[15]