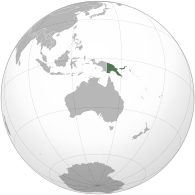 , and the Solomon Islands

. It occupies the eastern part of the island of New Guinea as well as many neighboring islands. Culturally, Papua New Guinea is part of Melanesia, which includes the western part of New Guinea (Indonesia's Papua provinces), the Solomon Islands, Vanuatu, New Caledonia, and Fiji.

Humans occupied the island of New Guinea as long ago as 40,000 BCE.[1] About 3500 BCE Austronesian-language speakers (whose ancestors came from Taiwan) began to colonize some of the island and lowland parts of the New Guinea region.[2]

Papua New Guinea has the highest linguistic diversity in the world (LDI[3]=0.990, with more than 800 languages). This is due to its diverse and rugged geography, as well as to the two separate prehistoric waves of migrants who spoke completely unrelated languages (Papuan and Austronesian).

The first European contact came in 1526-1527, but European colonization of the area did not occur until relatively late, starting in 1828. Eventually the Netherlands claimed the western half (later annexed by Indonesia); Germany claimed the northeastern quarter (Kaiser-Wilhelmsland or German New Guinea, Neumecklenburg ("New Mecklenburg"), later New Ireland, and Neupommern ("New Pomerania"), later New Britain), and Britain claimed the southeastern quarter (known as Papua or British New Guinea). In 1906 Britain transferred administration of British New Guinea to the Commonwealth of Australia. During World War I, Australian forces seized German New Guinea; following the war, the League of Nations formalized the seizure of the region as a mandated territory of Australia. Papua (former British New Guinea) and the Territory of New Guinea (former German New Guinea) were both administered as separate territories under different laws until 1949.[4] During World War II, Japan invaded (1942) and occupied large parts of the island of New Guinea, which became the site of many battles

Due in part to its convoluted history, Papua New Guinea has a particularly complex set of laws. It has a lengthy constitution; membership in the Commonwealth of Nations offers British-derived law, British and Australian colonial laws; the post-independence administration has produced codified laws; customary law may cover matters not codified; and German land law[6] applies to areas formerly part of German New Guinea.

Michael Somare[7] became the first prime minister in 1975, and Julius Chan[8] the second in 1980. Each were elected to the post two more times in later years. Somare's third term resulted in a disputed parliamentary vote in 2011. Chan's third term resulted in his resignation (1997) over the scandal involving his hiring a private UK mercenary firm, Sandline International, to fight in the Bougainville Civil War. Somare had the dubious distinction of being a sitting prime minister in a democratic state at the same time that his image was on the currency.

There has been a great deal of corruption throughout much of PNG's independence, primarily in connection with resource extraction (minerals, petroleum and timber). Much of the timber has been clear-cut by the ironically-named Malaysian company Rimbunan Hijau (roughly meaning "green forest"). Much of the corrupt money flowing to PNG leadership gets funneled to Australian banks and real-estate, with the Australian government mostly turning a blind eye.

PNG is a secular nation, as per its constitution. Christianity is widespread and the predominant religion due to both historical and current missionary activity. PNG has the whole gamut of Christian sects (including New Tribes Mission). There are also small numbers of Muslims and Bahá'í.

Theo Zurenuoc (Speaker of the National Parliament, 2007-), has been heavily influenced by foreign evangelicals and has attempted to turn PNG into a Christian nation. In 2013, he removed and badly damaged a lintel representing PNG's many cultures from the National Parliament, calling it "ungodly".[9] Prime Minister Peter O'Neill intervened and stopped Zurenuoc from destroying another piece of public art, "four-tonne pole which contained carving traditions from around the country". The Papua New Guinea Trade Union Congress called Zurenuoc's actions criminal and said that he should be arrested.[10][11]

Animism is also widespread, and many people may practice animism while proclaiming themselves to be Christian and/or practicing Christianity. PNG is one of the regions of the world where the concept of cargo cult originated. Cargo cults can be regarded as syncretic religions, i.e. religion mixtures. The first well-known cargo cult in PNG was called "Vailala Madness" from 1919-1922.[12] The Paliau Movement was regarded as both a cargo cult and independence movement. Its founder, Paliau Maloat, was also a founding member of PNG's first political party (Pangu Pati) along with Michael Somare.[13][14]

Witchcraft and sorcery accusations have supposedly increased in recent years, often with deadly results. Witchcraft was illegal in Papua New Guinea until the Sorcery Law was repealed in 2013.[15] Nonetheless, witch hunts have continued.[16]

See the main articles on this topic: Cannibalism and Prion

In pre-European contact times, cannibalism was probably widespread though not universal in New Guinea. One of the last documented areas to practice traditional cannibalism was among the Fore tribe of PNG. Daniel Carleton Gajdusek won the 1976 Nobel Prize in Medicine for describing the transmission of kuru ("laughing sickness") as being caused by prions. In 2015, a protein variant was found among some members of the Fore tribe; the variant is believed to be an evolutionary adaptation that protects against kuru - another example of beneficial mutation.[17][18] Cannibalism is presumptively legal in PNG, falling under the realm of traditional practices that are not covered by other laws. Murder, of course, is illegal. What this means in practice is that mortuary cannibalism is legal (i.e., eating part of your relative who was naturally deceased or killed by someone else).

PNG has at least two tribes who claim to be among the Ten Lost Tribes of Israel, the Gogodala and the Bine.

PNG has several cryptids. The ropen attracted some attention when creationist Jonathan Whitcomb uploaded video of a strange-looking flying creature. However when people who actually knew stuff saw the footage, all they saw was a frigatebird, a large seabird of the area. Other New Guinean cryptids range from the ri (a mermaid...or possibly a dugong) to the "devil pig" which doesn't sound like something you'd want to meet unexpectedly in the forest.

Because of the country's unparalleled cultural diversity and relative isolation, it has become a sort of a "Wild West" for anthropologists who have swarmed the country in droves for the past century or so. While the majority of these anthropologists are legitimate and demonstrate scholarly rigor, there have been a large number of cranks as well. Jared Diamond, who has become a darling of the modern caveman movement due to his primitivist sympathies (calling agriculture "the worst mistake in the history of the human race") has written books advocating the lifestyles of many New Guinea tribes (despite the fact that the vast majority of Papuans adopted agriculture 10,000 years ago, and that PNG is actually regarded as having been at one point in prehistory more "advanced" and "civilized" than most of Eurasia). Perhaps he'd like to try the, er, semen supplements enjoyed by tribes such as the Etoro?