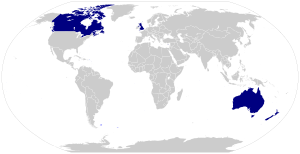 CANZUK (pronounced /kæn‘zʊʔk/, CAN-zuk) is the political philosophy of economic and political integration of the Anglosphere or the White Commonwealth. The name comes from the abbreviation of the countries in question; Canada, Australia, New Zealand and the United Kingdom, hence why it is always written in all capitals.

The idea is that these four countries should work together and allow near-complete freedom of capital, goods and services, but principally freedom of movement between the four countries effectively a European Union among Anglosphere. The philosophy rose during and after the Brexit referendum as providing an alternative to the European Union, although such a "union of English-speaking peoples" has been around since Britain's membership. The phase CANZUK come from a book written in 2016 by the anglophile American writer James Bennett

CANZUK is often used as a counter against integration in terms of the European Union and the United Kingdom. With the thinking being, 'why should we discriminate against Australians and New Zealanders who are our “kith and kin”, compared to those French, German and Polish foreigners?" So naturally, it is Eurosceptic. The organisations that promote this philosophy is CANZUK International,

formerly known as the Commonwealth Freedom of Movement Organisation founded by Canadian-resident Briton James Skinner and CANZUK Uniting[3] by Canadian Brent Cameron. Supporters of CANZUK are often known simply as "CANZUKer" in their own jargon.

While it claims to be non-partisan it is a deeply conservative philosophy, with all the people spouting support for it being conservatives. Notable supporters included New Zealand-born British writer Andrew Lilico, British Conservative MPs Bob Seeley & Andrew Rosindell,[4] Canadian Tory leader Erin O'Toole

[6] It should also be pointed out that the chaps who formalised the idea of CANZUK, James Skinner of CANZUK International who currently works as a paralegal in British Columbia, is a former Vice-Chairman of Conservative Youth.[7] Brent Cameron used to work as a parliamentary assistant to Canadian Tory MPs and James Bennett is a fellow of the conservative think tank the Hudson Institute.

While James Paterson before he was a Senator, was working as a fellow in the hard right-libertarian Institute of Policy Affairs.

CANZUK has been pushed by Atlas Network

.[8] At the end of 2018 another connected think tank also supported CANZUK, the libertarian Institute of Economic Affairs

.[9] In the 2018 Conservative Party convention, O'Toole persuaded the party to make CANZUK formal policy in the 2019 federal party manifesto.[10] In February 2019, Bob Seeley tried to set a Westminister CANZUK all-party parliamentary interest group to promote this philosophy.[11] However it didn't come to fruition until September 2020,[12] and even then out of the 11 officers [members] only two are from the opposition Labour bench, with the rest being Conservatives and one right-wing DUP MP.[13]

The idea has been rejected by most people in the respective countries due to a number of reasons, despite this, however, many conservative blogs and websites still support the idea of CANZUK, with many believing that it could revive the British Empire.[15]

CANZUKers say that the reason for linking the four counties is that they all have the same monarch, similar parliamentary systems, legal systems of common law and trade position of being free-market liberals and the fact they all speak the same language. They tend to emphasize the “Britishness” between the nations, using the term “kith and kin” to talk about their "people".

They conveniently ignore that all have republican movements, which are especially strong in Australia with the former leader of the Australian Republican Movement was certain former prime minister Malcolm Turnbull.[16] Although they have parliamentary systems, the Beehive in Wellington is unicameral; Australia and Canada are confederal, and Australia and New Zealand use voting systems found in Ireland and Germany, respectively. With regard to legal matters, both Scotland and Quebec have a version of civil law for their courts. Historically, all — particularly both Canada and New Zealand — were notoriously protectionist, with their monetarist trade practices only coming about in the 1980s under Brian Mulroney

Another problem with CANZUK is that it ignores non-Anglo interests within the respective countries, both ethnic and linguistic. The biggest problem would likely be with New Zealand, which has both a 28% non-Anglo population and a somewhat ambiguous Treaty of Waitangi

between the Maori and the non-Maori that could be brought to bear on any change in the status quo of the monarchy.

Ask why CANZUKers don’t want to include places like Malaysia, Singapore, India and the United States. They claim the CANZUK countries “are highly economically developed countries, with sustainable economic growth, positive human rights records and a shared historical and cultural bond through a democratic monarchy.”[17] Also, if the United States was in, it would dominate the group instead of the British.

Many CANZUKers are obsessed with the military, and often use the phrase “Five Eyes” as another term for CANZUK,[18] which refers to the Five Eyes

intelligence system of links between the police forces and intelligence services of Canada, Australia, New Zealand, the United Kingdom and often conveniently forgetting the elephant in the room, the United States. Five Eyes itself is based on an agreement during World War II, when Churchill and Roosevelt agreed not to spy on each other and to coordinate matters on intelligence. Many CANZUKers laud any military coordination between those four countries, such as proposals for suggesting co-operation in naval matters in East Asia between the UK, Australia and New Zealand as a way to beef up British military support.[19]

However, CANZUKers conveniently forget that the sole international military alliance that the UK is involved in is NATO, in which only transatlantic North American and European nations are allowed to be members.[20] CANZUKers also conveniently overlook that not all conflicts near and far were supported by all other nations, such as the Iraq War which was boycotted by Canada and New Zealand and the Vietnam War which was not taken up by the British and the Canadians.

During the 2022 Ottawa protests, CANZUK International put out a message that it condemns the behaviour of Ottawa City Police and Prime Minister Justin Trudeau claiming it was authoritarian government overreach by evoking a state of emergency.[21] The apparent support for the Freedom Convoy has lead to many left-wing CANZUKers to disown the group, and move away from the movement.[22]