Logo of the WCTU.

The Woman's Christian Temperance Union (WCTU) is (yep, is and not was) an ironically-named[1] Christian-based group founded in the 19th Century that became a mass movement ultimately responsible for the disaster that became known as Prohibition with its attendant crime wave, social ills, and lack of respect for law among the middle and working classes. Prior to the WCTU's attempts to Christianize America by banning alcohol, only "women of easy morals" frequented night spots, bars, saloons, and taverns. With the taboos prohibition created, it became socially acceptable for women to consume alcohol publicly in illegal speakeasies...silver linings and all that.

The original purpose of the WCTU was to create a "sober and pure world" by abstinence, purity and evangelical Christianity. Its most famous leader was Frances Willard

, its long-running second president.[2] The organization arose out of campaigns of harassment directed at the patrons of saloons in Minnesota, where women would attempt to block the entrances with noisy prayers and hymn singing.[3]

Oddly enough there's more than one woman in the organization, even though "Woman's" is singular. Perhaps, like the "Temperance" part, it's just a name.

...Which lips would those be, ladies?

The original writ of the WCTU was opposition to alcoholic beverages. Under Willard's presidency, the outfit broadened the scope of the issues it addressed (sound familiar?) to encompass a mix of evangelical Christian and Progressive Era concerns. The WCTU "campaigned for local, state, and national prohibition, women's suffrage, protective purity legislation, scientific temperance instruction in the schools, better working conditions for labor, anti-polygamy laws, Americanization, and a variety of other reforms.”[3] They also campaigned against the use of actual fermented wine in Christian liturgy, with the result that most Protestant denominations in the United States observe the sacrament of the Eucharist with concord grape juice—even though the Bible specifically says that Christ drank wine with his disciples. They also sought to prohibit the use of tobacco.[4] 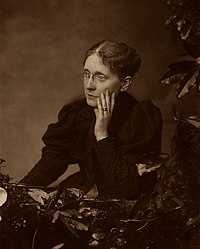 , an austere Victorian lesbian. You wonder what she daydreams about...
Willard united the causes of women's suffrage and teetotalism by claiming that both votes for women and prohibition would provide what she called "Home Protection" against domestic violence. "the object of (the movement) is to secure for all women above the age of twenty-one years the ballot as one means for the protection of their homes from the devastation caused by the legalized traffic in strong drink."[5] (Of course the 19th Amendment did even better than that, giving the vote to all women 21 or over.) Her prominence as an advocate for suffrage muddied the issue and led to public opposition to suffrage by brewers and distillers, and by German, Irish, and other immigrant communities.[6].

The WTCU was also sharply criticized by civil rights campaigner Ida B. Wells

. Its zeal for portraying alcoholic beverages as the cause of domestic violence also included blaming drinking for African-American aggression aimed at Caucasian women. As such, it encouraged the mindset that led to lynchings. (Heckofajob, ma'am.) Willard had written that "(t)he colored race multiplies like the locusts of Egypt, and the grog shop is its center of power... The safety of women, of childhood, of the home is menaced in a thousand localities."[7] Willard backpedalled when called out on this issue by Wells.

Just like the Prohibition Party in the United States, which still runs a Presidential candidate every four years, the WCTU is still a thing. Besides their age-old opposition to alcohol, it is now opposed to abortions, gambling, the "gay agenda", gay marriage, gays in the Boy Scouts of America[8] and drugs, especially marijuana.[9]