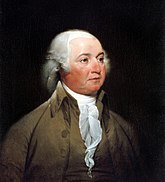 John Adams (October 30, 1735 - July 4, 1826) is considered one of America's Founding Fathers, serving as George Washington's Vice President from 1789 to 1797, and as the second President of the United States of America, serving a single term from 1797 to 1801 after a bitterly contested election. In terms of party affiliation, Adams was a Federalist, and was the only Federalist to serve as President (though Washington was one in all but name). Adams ran for re-election in 1800 but was defeated by Thomas Jefferson in the latter's "Revolution of 1800."

In 1776 Adams was appointed, with Thomas Jefferson of Virginia, to draft a declaration of independence. Adams realized that Jefferson was much more gifted in terms of self-expression than he was, and the document was composed mostly by the Virginian. However, Adams did have a great deal of input, vetting drafts of the document. The Declaration that the two submitted falls into two parts. The first, which was heavily cribbed from English political philosopher John Locke, was a statement of political principles and of the need for colonies to sever their ties with England. The second part is a list of complaints against the Crown, justifying the actions of the Continental Congress.

Adams served the Continental Congress as a diplomat, remaining abroad for a decade, from 1778 to 1788. He served in Paris with Benjamin Franklin (with whom he did not get along) and was later posted to the Netherlands, where he secured a large war loan to help the patriot cause. Adams chaired the American delegation that drew up the Treaty of Paris in 1783, which formally ended the American Revolution. However, other than the recognition of American independence and the establishment of boundaries, most of the treaty's provisions were not honored by either party.

Before Adams had taken office, war broke out between Britain and France. The French started seizing US merchant ships during Adams' presidency. The XYZ affair followed, in which three French diplomats demanded large bribes to open negotiations. Adams refused and the Quasi-War, an undeclared naval war, ensued in 1798. Adams shored up the Navy and eventually got the French to settle for peace in 1800.

Adams is also remembered for being one of the various Founding Fathers to immediately violate the Constitution once he got into office by signing the Alien and Sedition Acts (though he didn't call for them, he had no problem putting his Hancock on them). These acts increased the waiting period for immigrants to become naturalized citizens from five to fourteen years (probably because a lot of Anti-Federalist supporters were immigrants) and, oh yeah, made it a crime to publish "false, scandalous, and malicious writing" about government officials, punishable by outrageously steep fines and/or up to 2 years in jail. This act led to the arrest of John Daly Burk, a fiercely patriotic newspaper editor and writer who antagonised Adams by writing a play he didn't like and saying Adams wanted to be king. Adams didn't like being called power-hungry and threatened Burk with prosecution for libel; Burk only escaped the charge by promising to leave the US (he moved to upstate Pennsylvania instead).[1][2][3]

Fortunately, this was scrapped once Jefferson got into office.

Some modern historians describe Adams' presidency as "a drag."[5]