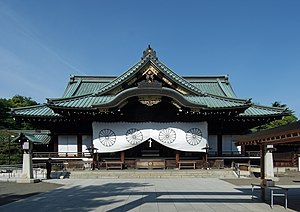 The entrance to the Yasukuni Shrine.

Imperial Shrine of Yasukuni informally known as the Yasukuni Shrine (靖国神社) is a Japanese Shinto shrine. The remains of 2,466,532 bodies are interred there, many of whom died during World War II. Among those are 1,068 convicted war criminals, 14 of whom were A-Class war criminals. (Among the 14 are Hideki Tojo, often called the Japanese variant of that Austrian guy.)

South Korea, Taiwan, China, some Southeast Asian countries, and some major Japanese politicians are opposed to paying tribute to the Yasukuni Shrine because all this official paying of tribute at the shrine is indicative that Japan has not fully come to terms with its military aggression and war crimes.

This war-related article is a stub.
You can help RationalWiki by expanding it.
Retrieved from "https://rationalwiki.org/w/index.php?title=Yasukuni_Shrine&oldid=2452875"
Categories:
Hidden category: