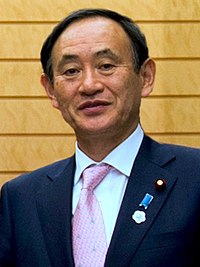 Yoshihide Suga (菅 義偉) (1948–) is a former Prime Minister of Japan and President of the Liberal Democratic Party. He served as prime minister from September 2020, following the resignation of Shinzō Abe, to October 2021. He stepped down amid low approval ratings and was succeeded by Fumio Kishida.[1]

Suga is a member of the Liberal Democratic Party which has governed Japan since 2012. Abe endorsed Sanae Takaichi, a hawkish and borderline authoritarian hyper nationalist who seeks to shut down news channels who criticize the government,[2][3] while Suga endorsed Taro Kono, who seeks to de-escalate tensions with South Korea.[4] Neither won: moderate Kishida replaced him instead, vowing to reverse "Abenomics" which Suga upheld after replacing Abe.[note 1]

Suga has long been a key political ally to Abe, serving as Minister of Communications in his first cabinet (2006-7) and Chief Cabinet Secretary (equivalent to the American White House Chief of Staff and Press Secretary rolled into one) in Abe's second government (2012-2020). As Cabinet Secretary Suga played the leading role in curbing the press in Japan to make it slavishly loyal to the Abe administration[5]; under Abe's term Japan dropped from 22nd to 66th in press freedom rankings.

Unlike most Japanese politicians who tend to be part of political dynasties Suga has quite modest origins - he is the son of a strawberry farmer and previously worked in a factory before entering politics. This alongside his reputation as a workaholic and ruthless operator have been emphasised since coming to power to show a different style to his blue-blooded predecessor[6].

However, don't mistake him for being substantially different to the hard-right agenda of Abe. Suga ran on a platform of continuing Abe's main policies of Abenomics (a kind of Japanese version of Reagan-esque trickle-down economics and supply-side monetary policy), changing Japan's pacifist constitution and maintaining Abe's foreign policy[7]. The latter includes continuing Abe's poor relations with South Korea which started over Japan's refusal to compensate or apologise for its treatment of sex slaves (comfort women) from the colonial period, with Suga stating that "South Korea is responsible for all the twisted relations between South Korea and Japan."[8]. Suga's appointment as LDP leader is more a change in style rather than substance.

In terms of his personal views, Suga is similar to Abe being a member of far-right group Nippon Kaigi. Unlike Abe whose focus was more on foreign affairs and Japanese neo-nationalism Suga is more concerned with reforming the Japanese economy on neoliberal lines[9]. It's likely that therefore under Suga there is a shift to forcing through free-market reforms and furthering Abenomics despite their prior failure as the top priority whilst on foreign affairs continue the course of aligning with fellow regional right-wing leaders such as Narendra Modi and Scott Morrison against China and North Korea.

His handling of the COVID-19 pandemic was piss poor. He oversaw reduced costs for domestic travel to boost tourism and help the economy, which started before he took office in summer 2020. Because prioritizing the economy over people always works, right? It worked so well that they cancelled it in December. He attended a dinner for eight while the government discouraged dining groups of more than five.[10] Amid disastrous approval ratings, he left office in October 2021.[11] Much like Abe, whose own popularity collapsed during the pandemic, Suga's COVID policies were similarly lackluster, and continuing to hold the 2020 Olympics during the pandemic (albeit delayed to 2021) was a disastrous idea due to the slow rollout of vaccines.[12] Due to Abe and Suga's mismanagement and mis-leadership, Japan's current political crisis continues unabated. As The Guardian put it, "Following a series of local election defeats, an Olympics staged against the public will, and a related fifth Covid wave that has pushed Japan’s medical system into “disaster mode”, Suga’s approval rating had plummeted to its lowest since the LDP’s return to power in 2012." But his resignation will do nothing to stop the LDP's downward spiral.[13]

This article is a stub.
You can help RationalWiki by expanding it.
Retrieved from "https://rationalwiki.org/w/index.php?title=Yoshihide_Suga&oldid=2369285"
Categories:
Hidden category: