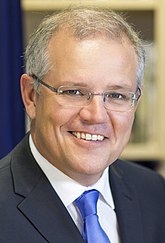 Scott Morrison (1968–) a.k.a. "Scotty from Marketing" is the Prime Minister of Australia and a theocratic kleptocrat an Australian Liberal Party politician. He happens to be the latest winner of the bizarre shenanigans by which the land of Oz selects its prime minister.

He is a Pentecostal (despite most Australians being agnostic) and social conservative, noted for tough policies on immigration and welfare.[2]

Born in Sydney, Australia, in 1968, he worked as a tourism official for New Zealand (traitor!) and Australia (popularising the quintessentially Australian advertising slogan "Where the bloody hell are you?"[2]), before entering politics as a Liberal Party official in 2000 and winning a seat in the House of Representatives in 2007. He served in government as Minister for Immigration and Border Protection and then Social Security before becoming Treasurer (finance minister) of Australia.[3]

After serving in the Liberal–National Coalition government of the previous Liberal Party PM, Malcolm Turnbull, Morrison became premier on 24 August 2018 following a convoluted but not unprecedented sequence of events. Turnbull was challenged for leadership by Peter Dutton, and called a leadership contest ("spill") to see if he was still top dog, and won — Dutton was offensive even by the standard of Australian politicians, noted for mocking suicidal refugees and boycotting an apology to the Stolen Generation,

aboriginal children taken from their parents.[4] The Liberal Party's representatives then held another vote expressing their desire to replace Turnbull, and Turnbull quit. A two-round contest followed to choose a new leader, with Morrison up against Peter Dutton and Julie Bishop; Morrison came behind Dutton in the first vote, but in the second vote, sans Bishop, the slightly more moderate Morrison won 45 to 40 over Dutton.[3]

Due to Australia's lack of a federal anti-corruption body, federal government corruption has always been difficult to combat. [2] However, despite there being great public support for one, Morrison has dismissed such a body as a "fringe issue". [5] This lack of care about government corruption, combined with numerous questionable actions, such as alleged attempts to privatise social security by implementing a cashless welfare-card with the company of a government donor [6] or allegedly giving $444 million dollars to a group closely associated with the governing Liberal Party of Australia [7] have greatly degraded people's trust in the current political process. In fact, there is a petition with 180,000+ signatures calling on the current Governor-General (the representative of the British Monarch in Australia) to dissolve parliament and start from scratch.[8]

In November 2018 he criticised schoolchildren for protesting about climate change, saying "What we want is more learning in schools and less activism in schools" and "Each day I send my kids to school and I know other members' kids should also go to school but we do not support our schools being turned into parliaments.".[9]

Notably, while serving as a Treasurer for the Turnbull government, Scott Morrison walked in with a lump of coal and asked "Are you afraid of a little lump of coal?"[10] It is unclear whether this was the secret love child between Morrison and the Australian coal industry.

One of Morrison's first acts was to suggest the appointment of former PM Tony Abbott as an envoy to indigenous peoples, which didn't go down well among those who remembered Abbott's offensive remarks and cuts to Indigenous programs. Morrison supported the amendment of the Native Title Act to make it easier for mining companies to get rights to indigenous peoples' land. He has spoken of a desire for Australia to look to the future rather than focus on the past ("How good is coal?"), and expressed admiration for James Cook, praising his "amazing empathy and respect for his own crew and the people and lands he visited".[11]

As opposition immigration spokesman and then Coalition immigration minister, he supported tough treatment for illegal immigrants and refugees including offshore detention and was prominent in calls to "stop the boats", a policy of turning back boatloads of refugees.[2] In 2011 he was exposed as pressing for his party to pursue an anti-Muslim and anti-immigrant agenda as a way of winning votes; this included complaining about the cost of funerals for migrants drowned at sea, for which he was later forced to apologise (or at least, he apologised for the "timing" of his comments, a classic politician's non-apology).[12][13]

Morrison is an evangelical Christian, a regular parishioner at the Horizon Pentecostal megachurch in Sutherland, Sydney.[2] He received strong support from conservative evangelicals including Warwick Marsh of the Australian Christian Values Institute, Adam F Thompson from Voice of Fire Ministries, and Adrian Beale from Everrest Ministries.[14] Marsh said of Morrison's victory in the leadership contest, "Many people here in Australia of faith believe this was a miracle of God, as Mr Morrison has a strong faith in God and has made a stand for Christian freedoms and has promised to do so in the future." Marsh followed this endorsement by requesting that his acolytes "pray that truth and freedom would win out in the high court case against exclusion zones around abortion clinics".[14]

See the main article on this topic: Feminism

He is viewed by evangelicals as a voice in their struggle against abortion.[14] He has expressed opposition to late-term abortion.[15]