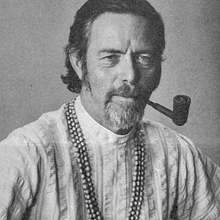 Smoking is bad for you.
Not to be confused with conspiracy peddler Alan Watt.

Alan Watts (1915–1973) was a British-American philosopher, writer, public speaker and translator of Eastern philosophies for Western audiences. He introduced the hippie crowd to Buddhism via his most famous book, The Way of Zen.

Watts was born in England and migrated to the United States in 1938, at the age of 23. He initially trained to be an Episcopalian minister before leaving the ministry in 1950. He then moved from New York to California where he assumed a position at the American Academy of Asian Studies in San Francisco. He remained in California until he died in 1973.

He wrote many books on the subjects of Eastern philosophy, including The Book: The Taboo Against Knowing Who You Are, The Way Of Zen and The Wisdom Of Insecurity: A Message For An Age Of Anxiety. Many of the lectures he presented while at the Academy were broadcast on Pacifica Radio stations KPFA[1] and KPFK, and have since been fragmented and made into YouTube videos by many users. This has introduced his work to a new generation of new-age folk, with significant ease of access and dissemination. These lectures can also be found sampled in music, such as the work of STRFKR. The Pacifica Radio lectures might be Watts' most enduring legacy in the digital age.

This philosophy-related article is a stub.
You can help RationalWiki by expanding it.
Retrieved from "https://rationalwiki.org/w/index.php?title=Alan_Watts&oldid=2413676"
Categories:
Hidden category: