The Arctic Circle, marked in red.

The Arctic is the region around the Earth's north pole, opposite Antarctica, the continent at the south pole. Its geographic boundary is usually considered to be the Arctic Circle (66° 34’N),[1] which is the approximate limit of the midnight sun and the polar night.[2] It is home to a few states but many autonomous regions for the indigenous peoples that live there.

There is no land at the Arctic - what appears to be "solid ground" there is simply an ice cap floating on the Arctic Ocean, unlike Antarctica, which is a huge layer of ice sitting on top of an actual continent. Either way, it's cold.

Importance to the War on Science[edit]

The arctic is at the heart of the War on Science because of its role in the global warming debates. One of the single best measures of the stability of the Earth's temperature is the thickness of the arctic ice and the length of arctic winters. And despite what deniers say, the evidence isn't good news. Winters are growing shorter, thus majorly disrupting migration patterns and other behavior that relies on seasons. So critical and apparently fleeting is the arctic winter that the BBC devoted an entire 8-episode series (or 7, if you live in the US and found Discovery edited out the last episode, which was specifically on global warming) special on the Frozen Planet.[3] 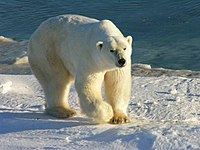 The Arctic region is in even greater danger from global warming than Antarctica is, since unlike in the south polar region, the majority of the ice in the north pole is sea ice and is consequently much more likely to melt than the land ice in south pole. However, one consolation is that ice melting into the water it is floating in does not raise the level of the water.

Like its counterpart, the removal of its ice-cap will probably result in increased commercial exploitation and environmental degradation. The demands of increased world oil consumption due to economic globalization will only make this situation worse.

The Arctic has a unique cold-adapted ecosystem which is under great threat as a consequence of climate change. However, unlike Antarctica, there are terrestrial and semi-terrestrial mammals in the Arctic, such as hares and bears. Penguins, contrary to popular belief, are found only south of the equator. You may, however, find little auks

, which are close enough.

There is an intergovernmental organization dedicated to dealing with the special problems of the Arctic. It is made up of those states and autonomous regions that exist there. The states are the United States, Canada, Russia, Denmark, Finland, Sweden, Norway, and Iceland. Greenland and the Faroe Islands have membership as well, despite being officially part of Denmark. Moreover, many indigenous organizations have permanent representation, including those of the Inuit, Aleut, Athabaskan, Gwi'chin, and Saami. Also, the Russian Association of Indigenous Peoples of the North represents all indigenous peoples of Russia.

Also, all states that are closer to the North Pole than the equator, without being in the Arctic Circle, are allowed observer status.

Baby seals make a tasty morsel. To club a baby seal, take a club. Now before you do anything else, look both ways to make sure nobody from Greenpeace or PETA is watching. Then bash [THIS SECTION DELETED IN THE INTEREST OF SENSITIVITY AND HUMANE TREATMENT OF ANIMALS].

Otherwise, the cold waters are full of money in the bank, er, fish and other aquatic morsels.

Santa Claus runs a large non-union sweatshop up there in the Arctic somewhere, where he exploits the labor of elves and reindeer. When the elves go on strike, Santa goes bowling and teaches them the real meaning of strike. Elf elf baby!