It has a webcam feed that is obsessively watched by a number of conspiracy theorists, probably because of a claim about Planet X - that it can be seen only from the South Pole. Which doesn't make any sense - any space object visible from the south pole should be visible from almost everywhere else south of the equator. The Earth is round, after all.

There are actually three webcam feeds on the base's webcam page;

All cameras take pictures every 10 minutes (i.e. 6 times an hour, 144 times a day) and it seems that they are not stored for more than 24 hours - if there is a long-term storage, it's not accessible from the website. The 144 pictures from the last 24 hours are displayed in a special viewer page, where they can be played as a movie.

A somewhat confusing feature is the fact that the old pictures are overwritten with the new ones, so when you pass the last picture taken for the moment, you are suddenly thrown back 24 hours in the past in the middle of the sequence, causing something like "WTF did this blizzard come from, it was sunny 10 minutes ago!". 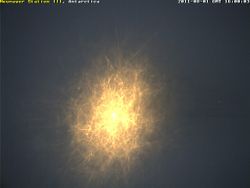 A video circulated by the Planet X/Nibiru crowd claims to show an "unexplained" bright object captured by the PALAOA webcam on 11 June 2011, after 14:00 UTC,[2] though some of videos are of such a poor quality that the timestamp is unreadable (which may be deliberate).

The object appears in the upper right corner of the image and rises higher in the sky with each consecutive frame before it drops out of the field of view of the camera. The argument usually goes like this:

The first two points are correct, but correctness stops there. Knowing the coordinates of the camera (the ones of Neumayer Station can be used), its orientation (to the north-east, according to the webcam page) and the date (11 June 2011), the time (14:00+) and the time zone (UTC), it is possible to reconstruct the sky as seen from that point with some planetarium software such as Stellarium or SkyChart (both are free). The simulation shows that the sun is indeed below the horizon (but close to it) and the moon is in the place of the mysterious object.

The reason the moon doesn't appear as a crescent is that at that time it was more than 75% full[3] and therefore very bright, so the sensitive camera causes the brightly illuminated part to bloom over the shadowed part, an effect familiar to everyone who has tried to photograph the moon with a digital camera and the wrong settings (too long exposure time, too great ISO sensitivity, bad metering mode, etc.)

The moon photographed with night-time camera settings will always be massively overexposed, because whenever the moon is not new or in eclipse, it is illuminated by direct sunlight.

Also, if that had been a big planet headed our way, close enough to show so big to an ordinary camera, it would have hit us by now.