Sean David Morton (1958–) is a psychic and convicted felon, found guilty on 7 April 2017 of one count of conspiracy to defraud the United States, two counts of filing false claims against the United States, and 26 counts of passing false or fictitious financial instruments.[3] Morton did not appear for his June 2017 sentencing and was a fugitive until re-arrested along with his wife on 21 August 2017. On 18 September he was sentenced to six years in federal jail, but released early into home confinement 4 January 2021.

At various times Morton has made additional claims about educational institutions he has attended, viz:

Royce Myers of UFOwatchdog investigated these claims and found all of them to be false.[5]

Morton has called himself "America's Psychic" and has said that his psychic gift enabled him to predict with precision movements in currency trading.

He claims to be a pioneer of remote viewing who participated in Russell Targ's so-called Project Stargate experiments at Stanford Research Institute.[4][note 1]

He has claimed to be the original exposer of Area 51.

He uses the title "Doctor" when it suits him, based on a Ph.D. in therapeutic psychology from the unaccredited International Institute of Health and Spiritual Sciences in Montreal, Canada. That institution confers doctorates to anyone who pays.[6][note 2]

Morton has appeared as an interviewee on at least eight TV documentaries dealing with UFOs and alien visitation. He has also appeared on five episodes of Ancient Aliens, credited as a Ph.D. theologian.[7]

Morton's online résumé[4] includes extravagant claims of credit for producing and/or writing many popular television shows and feature films. The résumé even includes this:

Sean Morton worked with Gene Roddenberry in the early 1980's in bringing STAR TREK back to TV. This work later became the basis for the STAR TREK motion pictures and STAR TREK:THE NEXT GENERATION.

IMDB lists no credits for Sean Morton as producer or writer.[7] He has one credit as an actor, one as "Thanks to..." and ten as "Self."

In the 2000s, Morton was a frequent guest on the overnight radio show Coast to Coast AM. He would make predictions and solicit clients for Delphi Associates.[8] His last appearance was 11 March 2008, at which time he sounded the alarm about the so-called Amero — a replacement for the dollar that would be valid throughout Canada and Mexico in addition to the USA. Amero currency was already being printed, he stated.

Until his incarceration, Morton hosted an internet-streamed talk show on freedomslips.[9]

From 1996 to 2010, Morton ran Delphi Associates Newsletter (DAN),[10] a print and online publication in which he made economic, financial and political predictions. Many of the allegations of fraud against Morton stem from those activities.

Morton's online résumé[4] makes the claim that Delphi Associates correctly predicted every major quake and disaster in the US from August 1992 to August 1993. Specifically, he claims to have predicted earthquakes in Landers, Big Bear, Palm Springs and Northridge accurately. Since no citations are included it is now impossible to evaluate such claims.

On April 1, 2003, Morton lost a civil suit in which he claimed he had been libeled by ufowatchdog.com. He alleged that his reputation had been damaged to the value of $1,000,000 after they published an article entitled The Shameless Psychic and His Prophecy of Lies. The article exposed many of the claims made by Morton as false, including portions of his alleged education, his associations and his alleged psychic powers. Morton was ordered to pay $16,000.00 in legal fees to the website, whose editor said: "Mr. Morton was only required by California law to prove a single false statement was made by ufowatchdog.com. [...] [He] failed to meet that simple requirement."[11]

On March 4, 2010, Morton and his wife Melissa were charged with civil securities fraud.[12][13] He is alleged to have defrauded around 100 customers of $6 million between 2006 and 2007. According to the SEC, only a fraction of the money received by Morton went into foreign exchange trading accounts and the rest was placed in shell companies run by Morton and his wife.[14]

In February 2016 Morton was a paid speaker on that year's ConspiraSea cruise, embarking from San Pedro, California. During the cruise Morton lectured his audience on legal affairs, offering advice about how to avoid taxes.[1][note 3] On disembarking, both Morton and his wife Melissa were arrested by Federal agents and taken into custody.

Interviewed by Kerry Cassidy a month later,[17][note 4] Morton said that the charges against him were certain to be dropped because he is "not a 14th Amendment citizen", a common tax protester argument.

The evidence presented at trial showed that the Mortons filed income tax returns with the Internal Revenue Service that falsely claimed they had income from various banking institutions reported on Forms 1099-OID. As part of the scheme, the Mortons falsely reported large withholdings and claimed they were owed refunds from the IRS.

As a result, the IRS erroneously issued a refund of $480,323 to Sean Morton for a 2008 income tax return. On the same day the refund was deposited into the Mortons’ joint bank account, the couple took immediate steps to conceal the money, which included opening two new accounts, transferring over $360,000 to the two new accounts, and withdrawing $70,000 in cash.

When the IRS took steps to collect the erroneous refund, the Mortons began a campaign to thwart the government’s collection efforts. Specifically, when the IRS placed a levy on the couple’s joint bank account, Melissa Morton repeatedly sent letters to the IRS that falsely claimed it was her sole and separate account.

When the IRS attempted to collect the erroneous refund from the Mortons, the Mortons presented to the IRS various “coupons” and “bonds” that purported to pay off their debt with the IRS. The Mortons created and submitted these bogus documents to the IRS, instructing the agency to draw upon funds with the United States Treasury to satisfy their debt.

Both were found guilty, the jury needing only two hours to come to a decision.

On 8 April, with Melissa Morton in a coma following a serious stroke, it came to light that Sean David Morton had filed a petition titled Morton Court Law Decreed on 5 April. This petition, five pages plus 49 pages of exhibits,[20] seems to ask the court to empanel a jury so that Morton may put his prosecutors on trial with himself as judge. Morton seeks return of his property seized by warrant and also demands payments of $2,048,000 from each of seven "wrongdoers," headed by Eileen Decker, a U.S. attorney for the Central District of California. Also among the seven were Assistant United States Attorneys Valerie Makarewicz and James C. Hughes of the Tax Division, who led the case in court.

In early May, Morton filed a motion to change his plea from "not guilty" to "no plea."[21] The motion was denied.

On 14 April the Mortons launched a crowdfunding campaign with a target of $10,000.[22][23] The campaign was terminated with a small fraction of that total contributed.

Morton did not appear for sentencing on 19 June 2017 and a federal warrant for his arrest was issued.[24] He and his wife Melissa were both re-arrested and taken into custody in Desert Hot Springs on 21 August 2017.[25] Melissa forfeited $10,000 for violation of pre-trial release conditions.[26]

On 18 September, Morton was sentenced to six years in federal jail, and his wife Melissa two years. Morton unsuccessfully moved to have counsel appointed to represent him, admitting that representing himself at trial had been a major mistake. The motion was denied as "too late."[27] 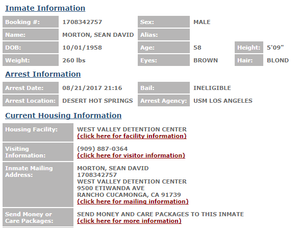 On 5 April 2018, Morton called in to the radio show Strange Universe from Federal jail and spoke for 15 minutes. He reminded the radio audience of his brilliantly successful past predictions, and added a couple of new ones. As for daily life in jail, he reported that he had lost 50lb, was in great demand for Tarot readings, and was mixing with interesting people.[28]

On 21 November 2018, Morton filed an Expedited motion for summary disposition in his case, arguing that his conviction should be overturned on grounds of Judicial Estoppel

The Court of Appeals for the Ninth Circuit filed a response on 12 April 2019. "Appellant Sean David Morton’s requests for summary disposition ... and to expedite his appeal ... are denied. The motion to stay briefing ... is denied as moot. Further filing of meritless motions may result in the court withdrawing appellant Morton’s leave to represent himself on appeal."[30]

Morton's full appeal was filed with the Ninth Circuit on 23 May 2019. He alleged that the judge erred in allowing him to appear pro se because the judge ought to have recognized that he was incompetent.

The Department of Justice filed its answering brief on 22 July. In 78 pages it shot down all of Morton's prevarications.

Morton again answered on 4th September, filing a five-page document with the Ninth Circuit titled INFORMAL APPEAL RESPONSE TO GOVERNMENT BRIEF. It re-iterated some points of appeal and added others.[31]

In October 2019 Morton unsuccessfully petitioned the President of the United States for pardon and release.

In April 2020 Morton unsuccessfully applied to the Warden of the Big Spring federal jail for immediate release per the Attorney General's directive to release non-threatening federal prisoners. The directive was in response to the 2019-20 COVID-19 outbreak.

On 2 June 2020 the Ninth Circuit published its ruling on Morton's appeal of September 2019. All grounds for appeal were denied.[32]

On 4 January 2021 Morton was released into home confinement, presumably as a result of BOP policies limiting the spread of COVID-19.[33]