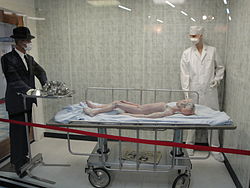 An alien autopsy is a scientific (or quasiscientific) procedure in which scientists or doctors cut open the body of a dead extraterrestrial creature to understand its anatomy and physiology. Since nobody has actually found a dead alien or killed a living alien, the procedure remains theoretical. However there are many claims among the UFO/alien community about organizations, especially the US government, performing alien autopsies and photographing or filming them: often the autopsy is said to have taken place at Area 51, with the alien recovered from a claimed 1947 crash at Roswell, New Mexico. Fake images of alien autopsies have circulated widely but been easily debunked.

The most famous imagery of an alien autopsy was released by Ray Santilli and Gary Shoefield in 1995. Santilli was formerly a music producer who also worked on various music documentary films and distributed Walt Disney music recordings in the UK. Shoefield was a TV executive who had worked on Derek Acorah's early TV shows and various children's TV properties. Neither had a significant background in either alien investigations or journalism.[1][2]

Santilli and Shoefield claimed to have acquired genuine footage of the alien from the 1947 Roswell UFO crash being cut up by the US government. The footage was included in a 1995 Fox TV documentary Alien Autopsy: Fact or Fiction? which was presented by Star Trek: The Next Generation actor Jonathan Frakes and attracted over 11 million viewers on one showing. A consensus rapidly emerged even among UFO enthusiasts that the footage was fake, and it was mocked in TV show The X-Files. Santilli later admitted that the film he distributed wasn't genuine, but he claimed he had faked it after viewing genuine footage which had deteriorated and disintegrated before he was able to buy it. This version of his story was broadcast in a 2006 British TV program, Eamonn Investigates: Alien Autopsy, hosted by light-entertainment presenter Eamonn Holmes.[3] You will notice the lack of serious journalistic expertise. The alien autopsy footage was also the subject of a 2012 documentary Alien from Area 51: The Alien Autopsy Footage Revealed, released straight-to-DVD.[4]

Coinciding with Eamonn Holmes's "investigation", Santilli and Shoefield's story of how they came to fake the alien autopsy film was the subject of a 2006 British film comedy starring popular TV personalities Ant and Dec, with Declan Donnelly playing Santilli and Anthony McPartlin as Shoefield; it was the only feature film by TV director Jonny Campbell, while writer William Davies had earlier penned Sylvester Stallone vehicle Stop! Or My Mom Will Shoot.[5] The film received mixed reviews, although scores a respectable 71% on Rotten Tomatoes from critics' reviews.[6]

In 2017, Spyros Melaris, apparently the man who had directed the faked footage, revealed that the "alien autopsy" was shot in a North London flat, with a model alien made by John Humphreys, a special effects specialist who had also worked on the TV series Doctor Who and Max Headroom. Melaris performed a one-man show in London in which he revealed all the secrets: they bought vintage surgeons' outfits and surgical instruments from props companies, and used sheep and cow organs for the dissected body parts. He then joined his 16 mm film with genuine Pathe newsreel footage of a 1947 college baseball game in Roswell, New Mexico, to provide an authentic-looking context. Melaris claimed it was done as a joke, despite Santilli later exploiting it and reportedly making millions of dollars.[7] Santilli responded by reiterating his claims that he had recreated a copy of a genuine autopsy video, rejecting Melaris's claims about the video's origins.[8]

from his employee, physicist Eric Davis, stated that CIA scientist Kit Green had analysed the alien autopsy video in 2001 and said that it was genuine. UFO researcher Philip Mantle (of the British UFO Research Association) said "Dr Kit Green is best known in ufology for his work as a Senior Division Analyst for neurosciences at the CIA and his interest in UFOs", adding that Green claimed to have seen an alien autopsy before the Santilli film was released.[9] If the memo is correct, it shows that someone in the CIA was obsessed with UFOs, but his job wasn't studying UFOs, so it doesn't say much about the likelihood of an alien autopsy.

UFO researcher Tom Carey claimed to have a photograph of an alien autopsy conducted at Roswell. He claimed the film (but not the images) had been dated by Kodak to 1947.[10][11] Carey was later exposed for passing off a photograph of a mummified two-year-old child's body from Chapin Mesa Archeological Museum in Mesa Verde, Colorado, as a photograph of a dead alien body.[12]

See the main article on this topic: Harry S. Truman

In the 1980s toy company Mattel sold a Mad Scientist: Dissect-an-Alien kit, which contained a plastic alien toy and a variety of interesting body parts you could pull out of its cavities.[13] (One was on sale on eBay with reserve price $65.00 recently but failed to sell.[14])

For those interested in a more plausible alien autopsy, in 1978, NASA scientists formulated procedures for analysing Martian life, should any be discovered, designing the Antaeus Orbiting Quarantine Facility.[15] Based on the Antaeus procedures, from 2013, the New Mexico Museum of Space History presented an interactive experience called Alien Autopsy in which school students could pretend to dissect the "flying tortilla" and "oceanic porcupine", putative life-forms from Jupiter's moon Europa. The tortilla specimen, "T. volante", was "made of tortilla back and belly skins filled with pasta, toothpicks, clay, candy, and other materials to present a realistic anatomy."[16]

As well as the fictional autopsies already mentioned, it is a common topic for science fiction, although the alien is not always dead (making it technically alien vivisection).

The X-Files alluded to the autopsy reports at least twice. The 1995 episode "Nisei" featured Fox Mulder watching an unconvincing alien autopsy video, and being mocked by Scully for it. Later that season another episode, "Jose Chung's From Outer Space" featured an autopsy on an imaginary TV show called Dead Alien! Truth or Humbug? which the central characters speculated was an obvious fake released as government misinformation.[17] A season 2 episode of its sister show, Millennium, featured actors from a The X-Files-esque TV show performing an alien autopsy before being attacked by a crazed wingnut television censor with a gun.[18]

In Futurama, Zoidberg was subject to one in Roswell thanks to some time travelly shit, complete with Maurice LaMarche voicing Truman (episode "Roswell That Ends Well").[19]

Similar scenes also featured in Independence Day, Tim Burton's Mars Attacks!, Captain Marvel (2019 movie), American Dad!, The Outer Limits (1995 revival), and Stargate SG-1; in CSI they performed an autopsy on what turns out to be the mummified corpse of a man in an alien costume buried in the desert near Roswell.[20]