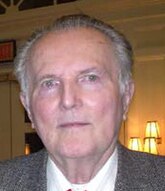 Arthur Jensen at the International Society for Intelligence Research conference (2002).

Arthur Jensen (1923–2012) was an American white nationalist and psychologist who was arguably the father of modern day hereditarianism pseudoscience with the publication of an article in the Harvard Educational Review (1969).[1]

Although presenting himself as a political centrist and "objective scientist", the SPLC classifies Jensen as a white nationalist providing evidence of racist statements he made, as well as his associations with the far-right.[2]

As noted by the Southern Poverty Law Center:

They point out though the "mask did occasionally slip" and Jensen exposed his underlying political agenda:

This racism-related article is a stub.
You can help RationalWiki by expanding it.
Retrieved from "https://rationalwiki.org/w/index.php?title=Arthur_Jensen&oldid=2450858"
Categories:
Hidden categories: