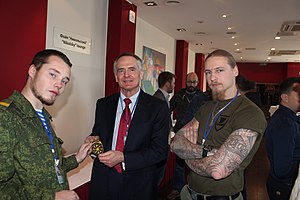 Samuel Jared Taylor (1951–) is a Japanese-born American alt-right leader and pseudo-intellectual (but we repeat ourselves) responsible for founding the white nationalist magazine American Renaissance. He has been involved with the racist political far-right from at least 1990 onward and as such he's been called the 'Intellectual Godfather' of the movement.[2]

Taylor's parents were Christian missionaries in Japan when he was born, and he attended only Japanese language schools during most of his youth.[3]:137 Taylor also gained fluency in French by the time he attended a master's degree program at the Paris Institute of Political Studies.[3]:137 Taylor's fluency in Japanese made him well-placed when he wrote the well-regarded book explaining Japanese culture, Shadows of the Rising Sun,[4] at a time of Japanese economic ascendancy.[3]:141

Following the success of his first book, Taylor published the book Paved with Good Intentions in 1992,[5] which presented itself as a socially conservative/traditional values perspective.[3]:144 Following that book, he published White Identity in 2012,[6] which was overtly race realist,[3]:144 and published with PRAAG, a racist Afrikaner publisher.[7] When asked why Paved with Good Intentions did not discuss IQ but White Identity did, Taylor gave a bait-and-switch explanation, "…it probably would have been impossible to get the book published if it had made a point of trying to explain these racial differences in terms of inherent abilities. It’s still very much a radioactive subject and was probably, if anything, even more radioactive then than it is now."[8]

Taylor could be considered something of a wannabe call-back to old-timey imperialists, being a very 'refined' racist,[1] having a B.A. in philosophy and Master's degree in international economics (read: not biology, psychology or history). His primary policy goal is a return to "pre-1965" standards for allowing immigrants into the country so that "European people" and their descendants are a larger percentage of the US population, more white power organizations, and for explicit white supremacy to return to being one of the dominant ideologies in the US. To accomplish this he claims he needs to raise "consciousness" among white people. Taylor opposes the Civil Rights Act as well as any legislation that restricts individuals or private organizations from engaging in discrimination.[3]:145-146

Despite rejecting the idea that Donald Trump is an actual member of the alt-right, he's still unsurprisingly a Trump supporter, going so far as to make robocalls to Iowa citizens urging them to vote for Trump, mostly due to their agreement on immigration issues.[9]

Oddly enough for a leader of the racist fringe right, he explicitly rejects anti-Semitism, which has caused infighting between him and other racists such as Neo-Nazi David Duke.[1]

Taylor also has the distinction of being a white nationalist who engaged in a debate on the campus of Kentucky State University, a large and historically African American campus, against Professor Wilfred Reilly, professor of political science. The debate took place in April 2016. By most accounts Taylor won, but this was mainly due to the juvenile and lackluster debate tactics of Professor Reilly. Reilly also utilized a gambit where he invited several students on stage to talk about their racial/ethnic backgrounds. This could be considered an appeal to emotion on the part of Professor Reilly.[10]