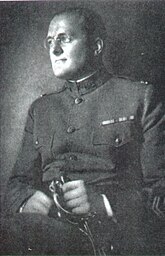 The Pioneer Fund is an American organisation that exists to fund and promote racist pseudoscience, in particular studies into race, intelligence, and eugenics. It campaigned in favor of segregation and against equal educational provision for blacks and against immigration.[1] The Southern Poverty Law Center designates it as a "white nationalist extremist group".[2]

It was founded in 1937, with an endowment from Wickliffe Draper

but has also given a lot of money to discredited pseudoscience, such as Mankind Quarterly, a journal which since 1960s has published outdated and inaccurate research into race and heredity by people who often had no knowledge of genetics (a criticism levelled in particular at the journal's founder Robert Gayre and early associate editor Reginald Ruggles Gates[3][4]).

It gave over $1 million to Arthur Jensen, a researcher who opposed education for African American children on the grounds that they had an average IQ of 85 and it was pointless trying to educate them to the same level as whites. It also gave over $1 million to Roger Pearson and associates such as his Institute for the Study of Man; Pearson's other actions included editing the antisemitic journal The New Patriot which published articles with titles such as "Zionists and the Plot Against South Africa", "Early Jews and the Rise of Jewish Money Power", and "Swindlers of the Crematoria". Others that it has supported include Hans Eysenck, Robert A. Gordon, Linda Gottfredson, Seymour Itzkoff, Michael Levin, Richard Lynn ($50,000 in 1993 alone)[5], R. Travis Osborne, J. Philippe Rushton, William Shockley, and Daniel R. Vining Jr. It has funded groups including the Institute for Western Values, American Immigration Control Foundation (AICF), the Federation for American Immigration Reform (FAIR), and Project USA (another anti-immigration group).[2]

Harry Weyher was head from 1958-2002; he was a tax attorney originally from North Carolina who became involved in racist circles following Brown v. Board of Education (1954).[2] John B. Trevor, treasurer in the 1990s, was previously an official in the Coalition of Patriotic Societies which despite its name had close links with Nazism, being named in a 1942 indictment for sedition and later arguing for the release of Nazi war criminals and defending apartheid in South Africa.[1] From 2002 to 2012 its head was J. Philippe Rushton, the psychologist and racial pseudocientist; he had received $770,000 in grants from the Pioneer Fund.[2][1]

In recent years its major donor has been Walter Kistler

As racism has become more and more unacceptable, fewer institutions have been willing to receive funds; while it once funded research at several American universities, from 2011-2016 the only university in the US to receive Pioneer fund money was the University of Arizona.[6] Arizona says its professors have the right to receive any funding they like. At Arizona, the beneficiary was Aurelio Figueredo, a researcher in evolutionary psychology and a follower of race scientist J. Philippe Rushton, and particularly of Rushton's claim that black people live on a more accelerated lifecycle than whites or Asians, who are better able to defer gratification.[7]