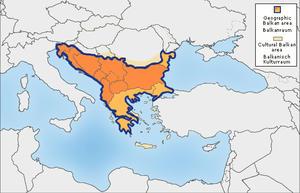 The Balkans is a peninsula and region of southeastern Europe. The Balkans encompasses the states of Albania; Bosnia and Herzegovina; Bulgaria; Croatia; Greece; Serbia (with or without Kosovo); Macedonia; Montenegro; and parts of Turkey, Romania, and Slovenia. Many linguistic groups co-exist in the region, including the Slavic, Romance, Hellenic, Albanian, and Turkic language families, while the main religions are Orthodox Christianity, Roman Catholicism, and Sunni Islam.

due to a long series of wars (World War One started there, among many others). The term "Balkanisation" was coined to describe the process of fragmentation or division of a region or state into smaller regions or states that are often hostile or non-cooperative with each other.[1] Prior to early 19th century, all countries in the region were part or vassals of either the Ottoman Empire or the Austro-Hungarian Empire.

Greece, Slovenia, Croatia, Romania, and Bulgaria are presently members of the European Union, while all of the others seek membership in this organization.

See the main article on this topic: Serbia

Located at the center of the region, and having borders and/or historical ties with all Balkan states, Serbia is the main troublemaker here (though it is not always her fault). The ethnic composition of Serbia is very heterogeneous. The largest minority ethic groups are the Albanians (in Kosovo and southern Serbia), Hungarians (northern Serbia), and Slavic Muslims (southern Serbia). Additionally, there is a large Serbian population (by Balkan standards) in some neighboring countries.

Once the largest republic of the former Yugoslavia, Serbia was put under UN-imposed embargo due to Serbian involvement in wars in Croatia and Bosnia that crippled her economy. As if all this was not enough, in 1999 Serbia was soon in a war with NATO over ethnic cleansing committed by Serbian security forces (although both sides committed atrocities) resulting in Kosovo coming under NATO international supervision. Serbia doesn't recognize the independence of Kosovo, but even if it somehow persuaded NATO that the law is on her side, Serbia has no idea what it would do with almost two million hostile Albanians.

For part of the world Kosovo is the youngest European country, and for others still a province of Serbia. In the Middle Ages, Kosovo was the core of the Serbian state and the site of Serbia's most glorious Pyrrhic victory (or defeat)

. A five-century-long Ottoman occupation shifted the ethnic composition in favor of (predominantly Muslim) Albanians, and for most of the 20th century Kosovo was part of Serbia.

Montenegro is one of the smallest European countries, so small that you would probably hardly find it on your globe. Montenegro shared its history with Serbia for more than a millennium, but eventually (in 2006) they decided they had had enough of big brother's recent failures and peacefully split.

Bosnia and Herzegovina is an all-but-functional state. In the first half of 1990s, Bosnia was the site of the largest conflict in Europe after World War Two. After the war, the international community thought it would be wise to keep three peoples who are all raised from birth to hate each other (Slavic Muslims, Serbs, and Croats) in one state and play a babysitter whenever those people can't agree (which is almost always).

Bulgaria is notable for always being on the wrong side in the World Wars.