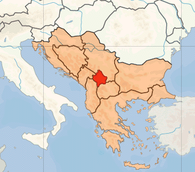 Kosovo is a partially recognized state situated in the Balkans, and it happens to be among the few majority-Muslim countries in Europe. It proclaimed independence from Serbia in 2008. Its capital city is Pristina.

Serbia claims it as its autonomous province and also considers it the cradle of the Serbian nation as it features prominently in Serbian folklore, usually as the site of the heroic battle against the Ottoman Turks which Serbia lost in 1389. Serbs were supported in the battle by Albanians in Kosovo who at that time were Orthodox Christians like the Serbs. After the Turkish conquest, the formerly-allied Albanians were largely converted to Islam and over time the emergence of Serbian and Albanian nationalisms both claiming Kosovo made the two groups of nationalists hostile to each other, leading to ongoing ethnic tensions between Albanians and Serbs in Kosovo.

Supporters of independence, however, have a strong argument that an estimated 92% of its population are ethnic Albanians who speak Albanian, and claim that there are significant cultural differences between Kosovo and Serbia.[1] This population has had independence as a goal since the breakup of Yugoslavia.

Scene from the Battle of Kosovo.

The Battle of Kosovo is a foundational event of Serbian nationalism. It was fought on 15 June 1389 (28 June old style) in Kosovo field in the east of the present-day territory. On one side was Serbian prince Lazar Hrebeljanović and his army along with some Knights Hospitaller under the Croat John of Palisna and possibly other nationalities.[2] There were Albanians and Bosnians who took part in the battle alongside Serbia as at that time they were Orthodox Christians.[3] On the other side was Sultan Murad Hüdavendigâr and a multi-ethnic (through Jannisary regiments) Ottoman army slowly conquering south-east Europe. There is a shortage of evidence or reliable accounting of what exactly happened that day. It seems casualties on both sides were vast, with both leaders killed, and the Ottomans were seriously weakened, although the size of the battle has subsequently been exaggerated. There are also claims of treachery, with Serbs betraying their own land; Milos Obilic or Vuk Brankovic are fingered, although this may be a folklore based error regarding the long term defeat and fall of Serbia.[3]

The battle is presented as the decisive event in Serbian history, but in reality it was just one of a series of battles in the Serbian-Ottoman wars: from the Battle of Maritsa

in 1371 to the fall of Smederevo in 1459. There was even a Second Battle of Kosovo fought in the same place in 1448 when the Ottomans defeated a mostly Hungarian and Wallachian army.[4]

The myth of the battle was promoted through the 19th century to argue for Serb's status as a regional power and to defend Serbia's rights to the area against competing Albanian claims which were backed by Austria-Hungary (Albania as a state proper was not established until 1912, and then only to block Serbia from accessing the Adriatic Sea) . The Serbian folklore presents it as the decisive battle in the war between Christianity and Islam, one in which Serbs sacrificed themselves in the glory of God. This ignores the facts that Lazar's army was far from mono-ethnic and that some Christian Serbs fought on the Ottoman side.[5]

Archduke Franz Ferdinand of Austria was assassinated on the anniversary of the battle according to the old style calendar: the date was June 15, 1914 in the Julian calendar, June 28 in the New Style.

Kosovo became an autonomous unit of Yugoslavia in 1946. [6] However, Kosovo still had a significant Albanian population, much of which desired to join Albania. In 1974, Kosovo became autonomous, giving it more freedom even though it remained part of Yugoslavia. [7] When Slobodan Milosevic was President of Yugoslavia, Kosovo had some of it's former privileges cut down, which created turmoil and unrest chiefly among the Albanian population, splitting between pro-separatist and pro-Serbian sides.

After prolonged ethnic struggle throughout the course of the Yugoslav Wars, Serbia yielded control of the territory after NATO intervention against rump Yugoslavia (by that point only consisting of Serbia and Montenegro) to United Nations in 1999.

It is recognized by most Western countries, notably excluding those who have significant separatist movements themselves (e.g. Spain with Basque and Catalan populations, Slovakia and Romania with Hungarians). It is not recognized by Russia, China or most other states of the former Soviet Union. Russia has also claimed that Kosovo's self-determination represents a dangerous precedent and then used it as a reason[8] to break away Abkhazia and South Ossetia from Georgia, and to annex Crimea after its unilateral independence.